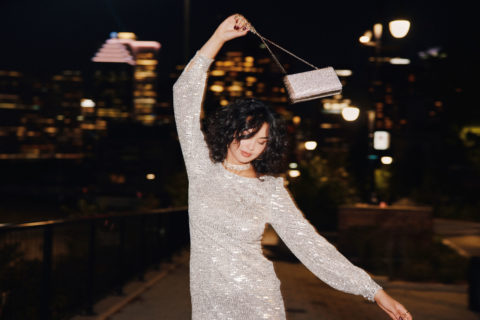 The Ghost of Prom Dresses Past is Back

Months after closing its doors, Le Château is making its return with a “Glamour Capsule.”

On Tuesday, November 16, Le Château is re-entering the Canadian retail conversation with a casual collection of graphic tees and tracksuits.

Just kidding. It’s a “Glamour Capsule” of decadent dresses and jumpsuits, with all the holiday flair you would expect from Canada’s go-to prom destination.

The 50 look assortment, available on lechateau.com, takes the drama and glitz synonymous with the Montreal-based brand and presents updated versions of its early-aughts staples. Lace and velvet cascade over plunging necklines. Glitter and ruching commingle in wide-legged pantsuits. There’s even a few mom-approved cutouts.

“Our sweet spot was always dresses,” shares Franco Rocchi, senior marketing director of Le Château. “So for the Le Château relaunch we’re starting with occasion dresses for the holiday season.”

It was a sad, nostalgia-inducing day when the pandemic forced Le Château to shut its doors. After filing for bankruptcy protection and subsequently liquidating its remaining stores more than a years ago, the retailer appeared to be gone forever. Or so we thought.

“Our customers never left Le Château; it was Le Château that — for reasons beyond its control — had to leave the customer,” says Rocchi. “So it was incumbent on us to return as quickly as possible. You don’t leave a loyal friend stranded.”

Such was the mentality of Suzy Shier, part of Toronto’s YM Inc. conglomerate, which bought the brand in June 2021 and was determined to keep it in Canadian hands. “Suzy has gone out of its way to honour and respect the original DNA of the Château brand,” notes Rocchi. “They rehired the designers and are ensuring that the original spirit remains intact.”

That isn’t to say that Le Château will pick up where it left off. As the press release teases, the retailer is relaunching with “a new focus and a brand new attitude.” For Rocchi, this translates to one word: trend-oriented.

“Every brand has its unique way of looking forward and looking back. You’ll see Le Château has a more forward-looking perspective: whatever’s exciting in the fashion capitals of the world, you’ll see in our dresses,” Rocchi explains. “We’re not fully walking away from the brand’s history, but the spirit is more fun and trend-driven.”

And yes, it will be available to shop in-store come the spring — along with a complete collection of occasion wear for both men and women — but not in the traditional sense. Select Suzy Shier locations will house Le Château apparel in a distinct and separate space as part of the deal.

As for the possibility of a standalone store in the future, Rocchi suggests never say never. “I hope that we see one again. And if the Le Château relaunch works, I don’t see why not.”

After all, who doesn’t love a throwback?