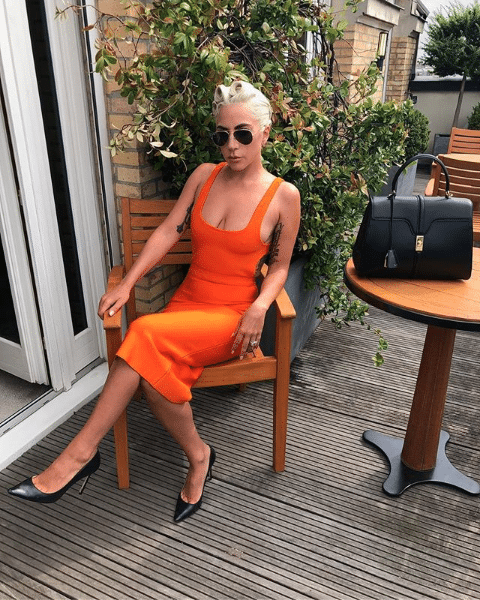 She's been spotted carrying a handbag from his upcoming debut collection.

The news that Hedi Slimane would be taking over from Phoebe Philo at Céline was met with everything from disbelief and disappointment to curiosity and excited anticipation. Would he supplant Céline’s thoughtful, feminine, understated aesthetic with his own very particular brand of rock ‘n’ roll?

His debut collection, which he’ll show in Paris in just a few weeks, has been kept tightly under wraps. We really don’t know what to expect. But Lady Gaga has given us a tiny clue. The singer/actor just paid a visit to the Louvre in Paris wearing a black leather Alaia trench, a Slimane-designed Céline handbag dangling from her arm.

APOLOGIES FOR DOUBLE POSTING BUT THIS IS VERY IMPORTANT. LADY GAGA FLAUNTING THE FIRST CÉLINE BY HEDI SLIMANE HANDBAG AT THE LOUVRE MUSEUM TODAY.

Gaga’s stylist, Tom Eerebout, confirmed to Business of Fashion that the bag was indeed a piece from the highly anticipated upcoming collection.

“He gifted her the bag and it’s the first one from his new collection,” he said. “Lady Gaga always supported Hedi at Saint Laurent. They’re really close friends and they have been since he photographed her for ‘The Fame Monster’ album cover.”

The handbag—a sleek, structured leather tote with gold hardware and a top handle—has no visible branding, save for a subtle Celine logo engraved on the clasp. A sign that Slimane intends to honour the French house’s discreet aesthetic perhaps? Gaga sure seems to love it—she has since been spotted with it two more times, showing it off on a Paris rooftop in an eye-popping orange House of CB dress and later pairing it with a slinky black Jonathan Simkhai number in Venice, where her film A Star is Born is set to premiere.

The bag is nice enough, but it lacks the personality and strong design language that earned some of the house’s bags—like the Trapeze, the Tri-Fold and the Luggage Tote—their cult status. We’ll just have to wait a few more weeks to see what else he has in store for us. Stay tuned.

Photography via instagram.com/ladygaga
Get the best of FASHION in your inbox Thanks for signing up!
The latest fashion, beauty and celeb news delivered right to your email #FASHIONforall Now, check your inbox to complete your subscription
We won’t ever use your email address for anything else
Want even more FASHION? Follow us on social media.