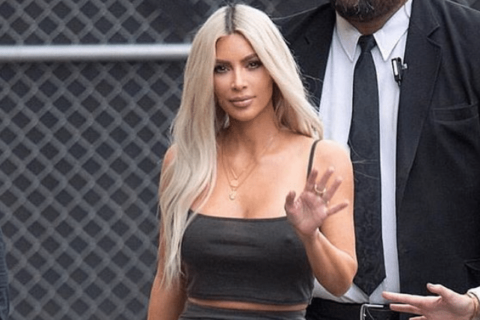 And LVMH is getting an 'executive redesign.'

Here are all the top fashion stories you need to know today:

So excited to share something I've been working on for over a year, @screenshopit! Screenshot any look on Instagram, Snapchat, anywhere and find the exact designer looks you see people wearing online, plus it suggests similar items at all price points! It basically turns your screenshots into a shoppable boutique! Watch my videos for a demonstration. #Screenshop_Ambassador

Stealing your fave celebrity’s style is going to be SO. MUCH. EASIER. thanks to a new app called Screenshop, which is being promoted by none other than Kim Kardashian West (she’s the app’s official “early adopter and advisor). The app, which heralds itself as a ‘Shazam for Fashion,’ allows users to screenshot an image of a celebrity wearing designer garments, then suggests similar items at several different price points. Apparently, it pulls results from 450 retail and brand partners, including Nordstrom, Saks Fifth Avenue, Farfetch and Topshop. Our only question is, what happens to LIKEtoKNOW.it after this? (WWD)

LVMH announces big changes on its business side

Major shakeups are happening among LVMH higher-ups, with Business of Fashion calling it the “greatest executive reshuffle to occur in the industry in some time.” Pietro Beccari, chief executive of Fendi, will replace Sidney Toledano as chief executive of Dior. Toledano will be replacing Pierre-Yves Roussel as the chief executive of the LVMH Fashion Group, overseeing “smaller” brands like Céline, Givenchy, Loewe and Emilio Pucci. And Roussel will “assume new operational responsibilities” within the LMVH executive committee. And here we thought designer musical chairs were complicated! (Business of Fashion)

Being Mrs. Aubrey Graham (a.k.a. Mrs. Drake) has its perks. Not only does it mean you’d be married to one of the most famous rappers in the world (while still maintaining your Canadian citizenship), but it also means you’d get some pretty stellar gifts from your hubby, including Hermes Birkin bags. In his cover story interview with The Hollywood Reporter, Drake reveals he’s been collecting the $12,000+ bag for his future wife.

“There’s very few things in this world, tangible things anyway, that hold their value and sort of appreciate as the years go on, so it was one of those things that I started collecting as well for the woman I end up with one day. So I have a fairly vast collection of Hermès to offer somebody at some point in life,” he revealed. Sign us up. (The Hollywood Reporter)

Excited to announce my new partnership with @reebok! Stay tuned and head to my website and subscribe for updates! x VB #ReebokxVictoriaBeckham

Reebok is adding another big star to its roster — Victoria Beckham. Sure, she was known as Posh, not Sporty Spice, back in the day, but she does embody the strong, confident and powerful woman persona that Reebok loves. The long-term partnership will include a Reebok x Victoria Beckham collection which is set to launch late next year and most likely plenty of campaigns bound to flood our social media feeds. (WWD)