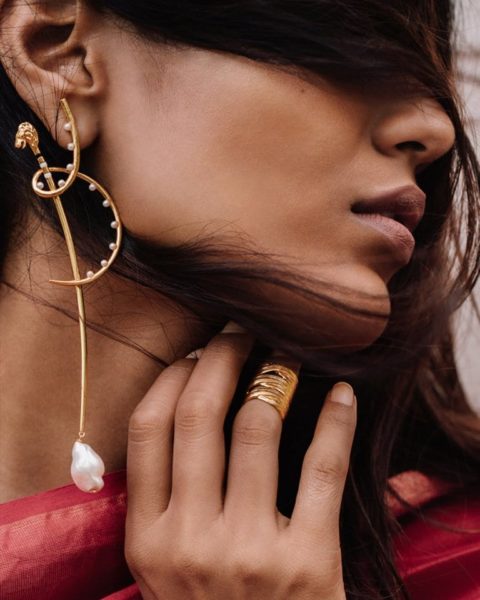 It was a few years ago—in 2015, to be precise—when I met Suhani Parekh, founder of Misho Designs, at the Vogue India offices in Mumbai during my time there on the magazine’s fashion features team. She was on the cusp of launching her sculptural jewellery line and had brought in some pieces to show the editors. In the short amount of time since she officially launched her line (in 2016), its eye-catching, architectural pieces have found their way on to global retail platforms like Farfetch and Luisa Via Roma, as well as on to the wrists, lobes and necks of superstars like Rihanna and Priyanka Chopra.

Last week, Kendall Jenner established herself as a major fan of the brand’s designs, sporting not one, not two, but three different pairs of Misho hoops in a single week. We caught up with the 28-year-old Parekh, who now lives between Mumbai and London, for a quick insider look at her journey from fledgling designer to Forbes’ 30-under-30 honouree to successful entrepreneur.

Kendall Jenner clearly loves Misho. Tell us about the pieces she wore recently.
She wore three of my personal favourites from our collection of slightly smaller hoops—the Mini Mismatched Hoops, the Mini Interrupted Hoops and the Mini Flow hoops. I was over the moon!

@kendalljenner ‘s got her hoop game on! Spotted in MISHO’s Mini Flow hoops at a basketball game last night!

Any other celeb spottings you’ve been super excited about?
Rihanna, of course. We had sent in pieces for a sourcing request for Vogue Arabia, but we weren’t told who it was for at the time! We knew the hoops were published in the following issue, but seeing them on the cover story with Rihanna was incredible.

When most people think of “Indian jewellery” they picture OTT, ornate, heavy pieces. Yours are the polar opposite—sleek, sculptural, inventive. Tell us about this aesthetic and where it comes from.
I studied art history and sculpture at Goldsmiths University in London. I worked a lot with metal at the time, slowly I started making pieces that looked better on the body than they did on a plinth and that’s really how it started. I loved the idea of how a work of art or architecture activates a space and began to think of the body as the space, and the jewellery as a little piece of sculpture or an architectural construction that gives it new dimension. I continued making sculpture after university and started experimenting with silver and that’s when the pieces truly took the form of jewellery and that was the point of departure for MISHO.

Tell us about the different materials you use, and the shapes and styles you’re most drawn to. Hoops, for one, feature in your collections often.
I don’t think of the pieces as just jewellery—for me they’re little pieces of sculpture. We work predominately in sterling silver, mixing traditional silversmithing techniques and combining them with techniques I picked up while working with metal and training as a sculptor at art school. The pieces are characterised by a vocabulary of clean lines, architectural forms and simplified geometric shapes with a strong emphasis on material and form. Hoops, ear cuffs and sculptural rings definitely make their way into most of our collections and a personal favourite for me is our body pieces.

Aries the Ram ♈️ || So excited to be launching our Zodiac pendants online this week! Stay tuned #misho #zodiac #aries

What have been some of the highlights of the Misho journey so far?
Definitely being on Forbes’ 30 under 30 list, a win at that scale is definitely a team effort and I was very proud of my team of craftsmen and excited that our hard work and dedication has been recognised. Before Forbes, the brand also won the Grazia Young Fashion award and the Elle Graduates award for accessory design. These were incredibly important milestones for us as well since they came quite early into the brand’s journey.

Seeing our pieces on style icons across the world like Kim Kardashian, Kendall Jenner, Deepika Padukone and Priyanka Chopra is definitely a highlight, and also the fact that we’re available at stockists across the world including Selfridges, Farfetch and Luisa Via Roma. I’ve been following these stores since before we launched Misho (or even graduated art school for that matter) so it really feels amazing to see our work up on a website that I’ve had bookmarked on my browser or have been visiting for as long as I remember!