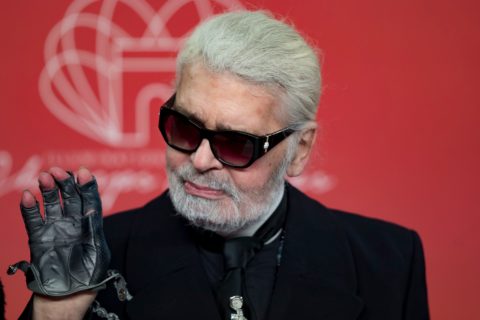 As the newly minted style advisor to the Karl Lagerfeld brand, Carine Roitfeld has been busy. Her latest project, “A Tribute to Karl: The White Shirt Project,” brings together member’s of the late designer’s inner circle, including Alessandro Michele, Cara Delevingne, Kate Moss, Diane Kruger and Tommy Hilfiger to design their take on Lagerfeld’s signature white shirt, with proceeds going to benefit Sauver la Vie, a French charity funding medical research at Paris Descartes University. Roitfeld told WWD the initiative would “allow us to honour [Lagerfeld’s] legacy while incorporating his unwavering love of fashion and giving back; I can’t imagine a better way for us to celebrate his passion for creativity.” There are seven designs in total, which will be replicated 77 times and sold for 777 euros each, in honour of Lagerfeld’s favourite number, seven. The shirts will be displayed at Karl Lagerfeld’s headquarters at Rue Saint-Guillaume during Paris Fashion Week later this fall. (WWD)

For "A Tribute to Karl," creatives from around the world are invited to design their own interpretation of Karl's most iconic style: the white shirt. A limited number of shirts will also be available to purchase, with all proceeds donated to charity. #KARLLAGERFELD #ATRIBUTETOKARL

Lola Rykiel, granddaughter of Sonia Rykiel, whose label launched the same year of France’s “Mai 1968” student protests and became synonymous with Paris’ bohemian left bank, is entering the family business. Her new label, called Pompom, is a high fashion take on athleisure, featuring luxe-looking leggings, leotards, and somewhat questionably, monochrome velour tracksuits. “Sportswear, but make it chic,” she described the line to Vogue. Pompom comes by its sporty influence honestly; Rykiel trained in the Martha Graham method in her youth and is a regular practitioner of Pilates and Gyrotonics. Rykiel says she named the line after her grandmother’s love of pompoms. The line will launch in November at pompom-paris.com. (Vogue)

Thank you @voguerunway for your lovely post! So happy to start my chic workout line @pompom.paris !?#repost @voguerunway thank you @nicolephelps ♥️

Advisory Board for the 2020 Woolmark Prize Announced

The Woolmark Prize is one of the most prestigious awards an emerging fashion designer can win: $200,000 in prize money and global stockists such as Harvey Nichols, Lane Crawford, Hudson’s Bay and MyTheresa.com. Though the finalists for 2020 will not be announced until October, Woolmark recently revealed the names on the advisory board responsible for selecting the ten finalists. On this year’s board are: designer Manish Arora, Eco-Age cofounder Livia Firth, EIC of Vogue Germany Christine Arp, Lane Crawford merchandising director Nelson Mui, EIC of WWD Japan Chizuru Muko, cofounder of Wardrobe.NYC Christine Centenera, and consultant Floriane de Saint Pierre. Woolmark says that the prize received over 300 applicants this year. Previous winners of the competition include Karl Lagerfeld and Yves Saint Laurent. (WWD)

This year, more than 300 designers from 50 countries applied for the International #WoolmarkPrize, the world’s leading fashion talent incubation program. In a new structure, this dedicated Advisory Council has the near-impossible task of selecting ten designers to proceed to the global final in early 2020.

Analysts at the financial services company Wells Fargo sent out a note to clients this week suggesting that the commercial yen for retro sportswear may have reached its peak. “Looking back over the past several months, we are beginning to view this trend as waning. At a high-level, it seems clear that the recent inflection in the apparel space was short lived,” the memo read. Over the past few years, brands like Tommy Hilfiger, Fila and Adidas experienced a revenue boost thanks to a nostalgia-driven increased consumer demand for their product. However, a decline in Google searches and heavy discounts on merchandise at retailers like Urban Outfitters suggests the trend may be bottoming out. According to forecast, Wells Fargo believes that Champion may be hit the hardest as a result of the changing tides. Read our feature on Champion’s newfound renaissance,“The Brand That Invented the Hoodie is Finally Cool Again,” here. (Bloomberg)

Made by #Champion. Worn by Champions. (Tap to shop) . . . #Fashion #Streetwear #SummerStyle ?: @champion_philly

Photo by IAN LANGSDON/EPA-EFE/Shutterstock
Get the best of FASHION in your inbox Thanks for signing up!
The latest fashion, beauty and celeb news delivered right to your email #FASHIONforall Now, check your inbox to complete your subscription
We won’t ever use your email address for anything else
Want even more FASHION? Follow us on social media.