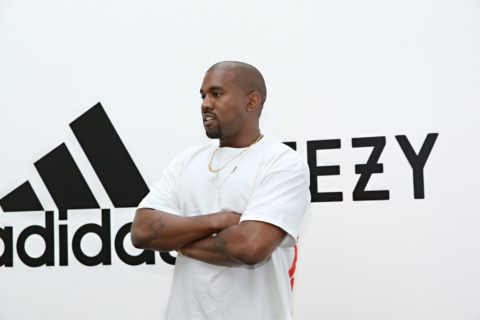 It’s been an, umm, interesting past two weeks for Kanye West. First, he posted a picture of himself on Twitter wearing a ‘Make America Great Again’ hat, and then praised Donald Trump in a confusing series of tweets, and now he’s set off a furor by suggesting that the slavery of African-Americans was a choice in an interview with TMZ. However, all actions have consequences and people are asking for Adidas to sever all ties with Kanye. (Adidas produces the consistently-sold-out Yeezy sneaker line.) “While Kanye can live safely in his multimillion-dollar castle, the rest of black America is continually marginalized and subject to unjust laws and treatment… we as consumers have the right to fight back against this type of dangerous propaganda,” reads a petition posted on Care2 that now has over 15,000 signatures. So far, according to Bloomberg, the brand has not discussed cutting their affiliations with West. (Hollywood Reporter, Bloomberg)

Ruffle dress in citrus yellow chiffon worn with a transparent poly-urethane bustier from our Spring-Summer 2018 ‘Artisanal’ Collection designed by @jgalliano is captured by @alangelati and styled by Stefano Roncato in the March issue of Gentleman magazine. #maisonmargiela #artisanalartisty

A Maison Martin Margiela Documentary is Coming Out Next Year

Martin Margiela is likely the most elusive designer in fashion history. Very few people even know what he looks like – he never released a press photo of himself – and when news broke that Margiela has left his namesake label, Renzo Rosso of the Diesel Group who owns Margiela is quoted as saying, “Martin has not been there for a long time.” So why would such an illusory figure agree to become the subject of a documentary? One can only suspect that he has a story to tell. Without Compromise, as the documentary is titled, is slated for release in 2019 and film distributor Dogwoof has planned to premier the film at the Cannes Film Festival. This is not to be confused with We Margiela, the documentary about the fashion house as told through the eyes of Margiela collaborator Jenny Meirens. (The Fader)

Former Coach designer Reed Krakoff was scooped up by Tiffany & Co to become the iconic luxury jewelry brand’s Chief Artistic Officer early last year. Since then, fashion fans have been waiting with bated breath to see what kind of a spin he’ll bring to fine jewelry. Finally, the answer is here. Paper Flowers is inspired by “the idea of flower petals, cut from paper and delicately pinned together,” and features plenty of bulbous, organic shapes that resemble orchids or clovers. “Paper Flowers is about stripping away all the rules associated with fine jewellery,” Krakoff said in a statement. The designer’s debut is being celebrated in Canada with a clever greenhouse-themed pop-up in Yorkdale Mall, on until May 31st. (Press Release)

The First Full Trailer for the Alexander McQueen Documentary is Here

Teaser trailers for the Alexander McQueen documentary, McQueen, have been circulating since mid-April, when the film premiered at the Tribeca Film Festival. But now, the first full-length trailer for the film has arrived and it’s as filled with the late designer’s raw emotion and creativity as one would expect. Clocking in at two minutes long, the trailer features archival footage of TV interviews with McQueen as well as tape from some of his most memorable runway shows. And, yes, I did choke back tears while watching, thank you for asking. (Harpers Bazaar)

Photography by Jonathan Leibson/Getty
Get the best of FASHION in your inbox Thanks for signing up!
The latest fashion, beauty and celeb news delivered right to your email #FASHIONforall Now, check your inbox to complete your subscription
We won’t ever use your email address for anything else
Want even more FASHION? Follow us on social media.