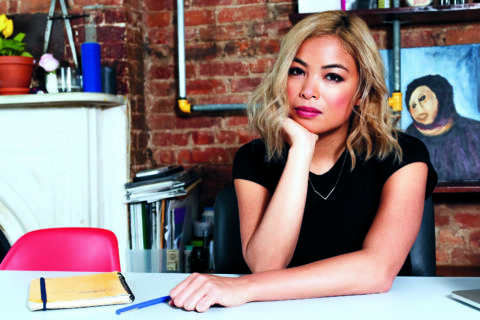 The author of Trick Mirror itemizes her favourite things to eat, buy, binge-watch, and more.

Remember the first season of Girls when Lena Dunham’s character Hannah says, “I think I may be the voice of my generation. Or at least, a voice of a generation.” Dunham didn’t exactly turn out to be the voice of a generation, but Jia Tolentino did. The New Yorker staff writer’s omnivorous brain lends unexpected depth to everything from athleisure to cursed images. She’s something of a millennial oracle, able to interrogate what it means to be live in the present world and articulate my most deeply held beliefs before I ever even realized they existed. Tolentino’s debut book, Trick Mirror, out today, chronicles everything from her early turn on a desert island reality TV show to grappling with the parallels between drugs and religion. It’s a delightful, complex book, by a delightful, complex character. We asked Tolentino about her favourite things.

The podcast you can’t stop thinking about?

The one true podcast for me is Who? Weekly, run by my friends Bobby Finger and Lindsey Weber, whose slogan is “everything you need to know about the celebrities you don’t.” It’s the perfect type of celebrity coverage: openly meaningless, always fun.

The show you can’t stop bingeing?

Like many of us, I watched all of Fleabag’s second season in a breathless stretch and haven’t stopped thinking about it since. Has there ever been a single higher-impact word in television than when the Hot Priest said “kneel”?

The song that gets stuck in your head all the time?

I’ve spent so many hours on the internet over the past six years trying to find a reasonably high-quality version of Jai Paul’s cover of the Jennifer Paige song “Crush,” which surfaced on the internet in 2013 in a leak. Now, as of this summer, it’s finally on streaming, and I’ve had that—and the whole album—on nonstop repeat.

I can always get down with Wikihow articles about basic social processes (check out “how to grind” if you haven’t); the US Department of the Interior’s Instagram account; and @photoghibli, the Twitter account that’s just Studio Ghibli screenshots and GIFs.

What is the last thing you bought?

I was driving around Normandy with my friend Emma and bought a white nightgown in a vintage store in Honfleur. The store attracted me, actually, because there were all these intriguingly Batsheva-esque dresses in the window. But a closer look reminded me of the fact that I am often covered in crumbs and I like to be as naked as possible, and a high collar and long sleeves and a big ruffled skirt simultaneously? It simply couldn’t be me.

What can’t you get enough of right now?

Chilled red wine, gardens, eating cherries while driving, hallucinogenic mushrooms, trying to learn about geology, hanging out with my friends’ babies, the 1975.

What’s the one thing you’re currently recommending to all your friends?

I’ve found myself saying “Have you read that Jenny Odell book?” a lot recently. It’s called How to Do Nothing, and it feels like a path to the actual only sort of future that feels livable—one in which capitalism is not the primary system of attaching value to our instincts and actions.

What’s the one brand staple you always rely on?

I have a pair of just-past-the-ankle Frye biker boots that I aspire to be resoling for decades.

What’s a left-field pop culture recommendation from a friend or critic you unexpectedly fell for?

After Emily Nussbaum wrote about Billions in its third season, I started watching it and blew through the whole thing in like a month. That’s unusual for me—I rarely binge-watch anything—but such is the persuasive power of Emily’s writing, and of the perfectly sleazy Billions universe, which Emily described, accurately, as feeling like a late-night snack.

Anything you’re super late on the bandwagon for but are now obsessed with?

One of the only ways that I make space in my melting brain is by completely avoiding certain things to the extent of my ability: I never used Snapchat, I’ve never seen The Bachelor or any Real Housewives, I haven’t watched a Super Bowl in years. What’s nice about this, though, is that I semi-regularly experience the thrill of late discovery. I used to avoid rom-coms, because they just didn’t bring me any pleasure, and then I watched all the Nancy Meyers movies and realized I was wrong.