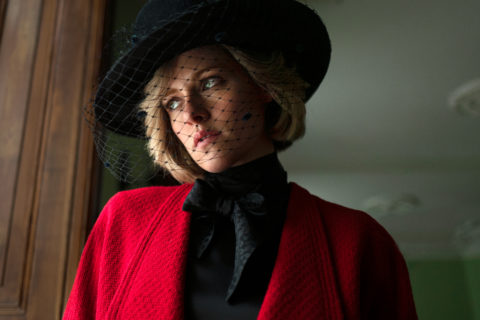 "When she looked strong and powerful, quite often she was wearing Chanel."

There’s no doubt that Princess Diana was among the greatest fashion icons of the 20th century, whether she wore embellished gowns, bodycon dresses or a simple jacket over high-waisted jeans. In Pablo Larraín’s Spencer, audiences are invited to peek behind the royal walls of what might have happened over three days around Christmas 1991, as Diana Spencer (played brilliantly by Kristen Stewart) and her sons stayed at the queen’s annual holiday destination, Sandringham House, where it’s believed Diana made the decision to leave Prince Charles following his affair with Camilla Parker Bowles.

Over the course of three days, Spencer — premiering in theatres today, November 5 — depicts the Princess of Wales’ inner turmoil as she battles bulimia and self-harm. It’s the outfits in the film that offer her a crutch, giving her the support she needs to exude confidence to the world and the paparazzi, even as she feels trapped and helpless.

The job of creating those spellbinding looks was in the hands of British costume designer Jacqueline Durran, who recently earned an Oscar for her work on Greta Gerwig’s Little Women, though her penchant for period wear — as seen in Pride & Prejudice and Anna Karenina — has earned Durran significant praise over the years. Larraín and Durran collaborated to select outfits that would bring Diana to life on screen. The People’s Princess had a longstanding relationship with Chanel and wore many outfits from the brand. Durran herself has also been working with the fashion house for over 15 years, and Stewart is a brand ambassador for Chanel, so the collaboration was ideal. 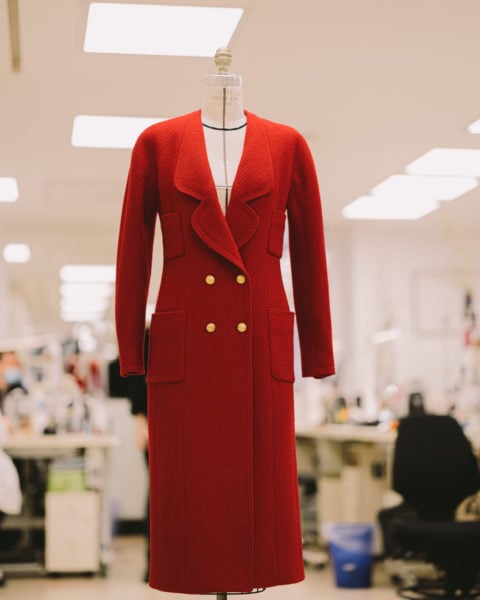 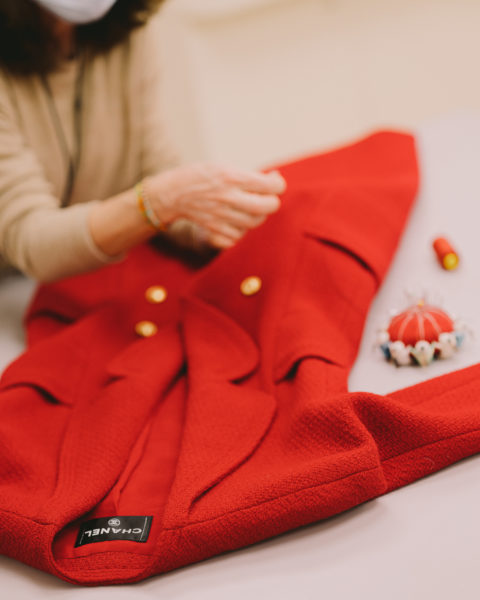 There are several outfits in Spencer that feature vintage Chanel, including the beige organza dress from the Spring-Summer ‘88 collection, a red tweed coat from the same year and a blue tweed jacket from 1990 (all remade for the film).

In a release, Stewart told Chanel she believed wearing the clothing gave Diana the confidence to carry herself. “When she looked strong and powerful, quite often she was wearing Chanel. So, when we incorporated the looks into the movie, I always wanted to make sure that if it was a scene that was more difficult or where she was feeling threatened, we put her in a Chanel suit, so we give her a bit of a support system. Even if she wasn’t feeling good inside, those were the moments when she really stood tall and shined.”

We spoke to Durran about capturing Diana’s style for Spencer, recreating the Princess’s looks and working with Chanel.

As a designer, you have this immense responsibility to capture the style and essence of Diana – what did that mean to you?

It was the most daunting aspect of the project, and I didn’t really know how to tackle it because there’s so many images of her and so many ways that you could approach it.

I found themes in what she wore. How I first started speaking to Pablo about the costumes in any detail was, we looked at things that she did repeatedly in [the film’s time] period — which was roughly ‘88 to ‘92. I showed him images, and I just waited to see what he responded to in the context of the film.

She was a fashion icon. How would you describe her style?

She was a fashion icon. But I’m also a little bit ambivalent about that because I feel that she’s more of a fashion icon now than she was at the time…For us in the UK, royal fashion is something separate, a little bit like now. Kate Middleton dresses very well, but she isn’t a fashion icon in the sense she’s not part of the central movement of fashion, or she doesn’t lead it in any way. She may be part of it, but it’s not like we look up to her and try to dress like her so much — well, maybe people do, actually, I don’t know. But I felt that in the ‘80s, though people looked at what [Diana] wore and loved her, now it feels to me that she’s more central to fashion than she was then.

When you were working with Pablo for Spencer, to what extent did you want to replicate Diana’s outfits versus creating your own interpretations of her looks?

I didn’t really want to replicate any of the outfits particularly because the thing is that everything she ever wore has a place and a date. Because she’s so photographed, you can more or less find out what she wore at any given moment…So, it was about finding a way of making clothes that you felt were exactly like Diana’s, but actually, they were always a bit different. So the plaid jacket, for instance, feels like one that you’ve seen Diana wear, but actually, it’s a little bit of a hybrid between many different costumes that she wore. 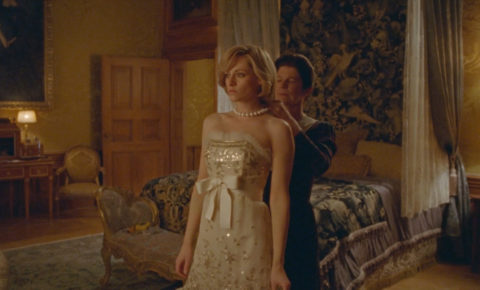 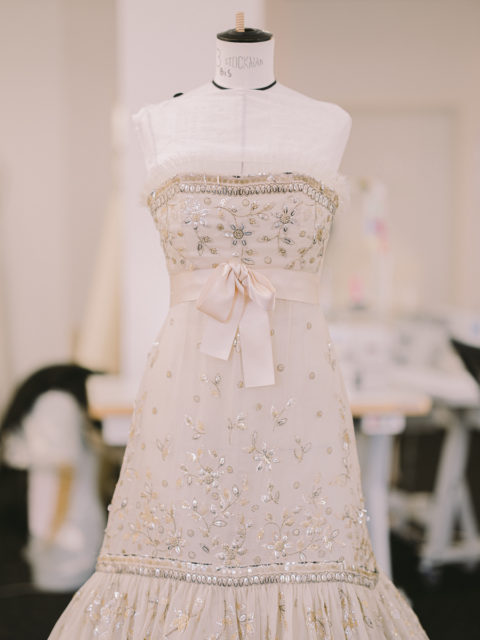 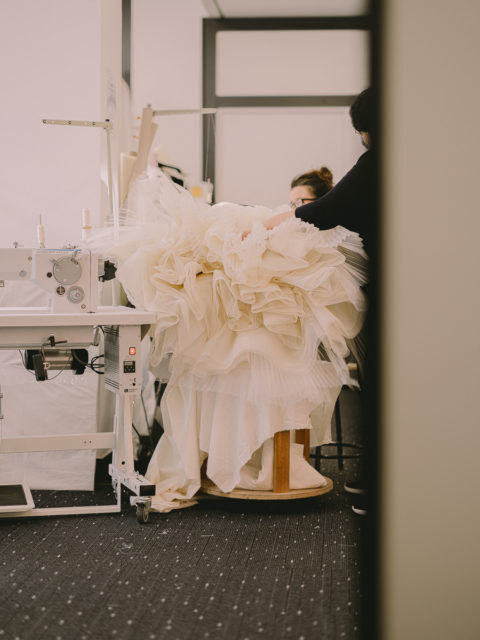 Diana had a long relationship with Chanel, and you’ve worked with the brand for over 15 years. How did you decide on what vintage Chanel pieces to feature?

We were all in agreement that what we were trying to do was to find things that would support Pablo’s vision for the film. So, the first thing I asked for was if they had any of the pieces that Diana actually wore. Not her own clothes, obviously, but the same style, and they did. She wore a red coat to visit Paris in 1988 and they had a version of that coat in the archives. And they had a version of the blue jacket cardigan that she wore in 1992.

We had a fitting just like you normally do…Everybody just really responded to the cream evening dress that she ends up wearing in the movie…even though it wasn’t exactly what we had first thought, it was such a fantastic dress to sum up her status as a princess that we just had to use it in the movie.

I do have to mention the wedding dress which is seen in the montage. I heard Kristen was spooked wearing it, but it was just a reinterpretation of Diana’s wedding dress, correct?

It was very much an interpretation…If you were going to make an actual copy of the wedding dress, it would take the whole costume budget for the movie because it would be such a huge thing to make. So we had to make a version of it, which was not as big and not as grand as the real one, but it just had to give everybody who watched the idea of the wedding dress…It didn’t have a big enough moment in the film to justify spending all that money to replicate it. So we bought a vintage dress and then we adapted it.

What’s your favorite outfit in Spencer?

I love the plaid jacket because it was actually quite hard to achieve. It’s so perfect as an opening for Diana, for summing up what she wore at that date.

Photography courtesy of Neon
Get the best of FASHION in your inbox Thanks for signing up!
The latest fashion, beauty and celeb news delivered right to your email #FASHIONforall Now, check your inbox to complete your subscription
We won’t ever use your email address for anything else
Want even more FASHION? Follow us on social media.