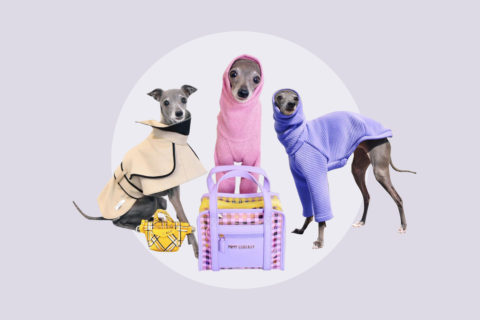 Get to Know Viral Canadian Fashion Sensation Tika The Iggy

Last week, a TikTok of an incredibly fashionable Italian greyhound lamenting the lack of occasions to wear any of her good outfits this year went viral. (Haven’t watched it yet? Please stop reading this article and do so immediately.) The dog behind the video was Montreal-based Tika the Iggy. “She is very much a diva in real life and I try to convey that online with her online persona,” says Thomas, one of Tika’s two dads. “I’m not really making much up.” We spoke to Thomas to get the story behind Tika the Iggy’s incredibly chic outfits, her rise to social media fame and how she’s using her status as a self-proclaimed gay icon to give back to the LGBTQ+ community.

Okay, so tell me about Tika.

She’s going to be ten years old in July, so she’s my nine and a half at this point. Her [social media] accounts have pretty much become fashion accounts [Laughs]. We live in Montreal and Italian greyhounds are desert dogs. So obviously, this is not the appropriate climate for them. Living in a country like Canada, they need to have a lot of clothes for practical reasons, because pretty much from October until the beginning of May, it’s too cold for them to be outside naked. She needs the clothes to stay warm, but like human fashion, we can have fun with it. We’ve incorporated anything from faux fur to sequins – anything that’s colourful and bright and will pop in a photo – but we also make sure that it’s functional, that she can actually walk around in it and be comfortable and, most importantly, warm.

Where do you get her outfits from?

We work with a lot of small vendors, like Dogs Wardrobe, Hound Around and Loko Pet Apparel. Italian greyhounds have an oddly shaped body – they have really long backs, big rib cages and tiny waists – so it’s hard to get something for them at a generic pet store because it will be too short or too baggy.

Does Tika have a favourite outfit?

Hmm, I think the most recent outfit we got, she was wearing it in the video. It’s very colourful. It’s very on brand with her personality.

It’s very much her way or the highway. She’s a really sweet dog. She loves to be around people, but also, she won’t do it if there’s nothing in it for her. So, you know, she’s a bit of a diva. She’s sleeps anywhere from 22 to 23 hours a day and when she’s awake she’s pretty much just looking for food.

Italian greyhounds sleep a lot in general, but as they get older, like most senior dogs, they just sleep more and more and more.

How long has Tika been on social media?

It’ll be five years in February. We started her account in 2016. The intention wasn’t to become this [big]. I started it because I thought I had a very cute dog and I wanted to share her outfits online. And my friends were saying I was posting too much of her on my personal account.

Was this her first viral video?

She’s had other moments, but this is by far the biggest.

Absolutely not. My partner and I joke about it because right now she’s going quite viral – she’s gained over 70,000 followers this week on Instagram and about 350,000 on TikTok. [Her followers] are skyrocketing right now and we keep looking over at her and she’s passed out on her bed with her tongue out.

Did she get an extra treat or something for her recent success?

She does get well-paid during her photo shoots and video shoots.

Who are her style icons?

Judy Garland, Lady Gaga. Celine Dion, of course. Tika’s a self-proclaimed gay icon because she has two dads – me and my partner – and because she’s always dressed fabulously like other gay icons. The bigger Tika’s become [on social], the more we tried to work with charities. One charity we work with is Rainbow Railroad. They’re based in Toronto. They help people seeking asylum from countries where they can be prosecuted for being gay to come to Canada and start a better, safer life. We try to promote visibility of LGBTQ+ people online. I’ve had people reach out to me saying my son came out to me because he saw how comfortable I was watching this dog with two dads. It’s been really cool to see [the response].