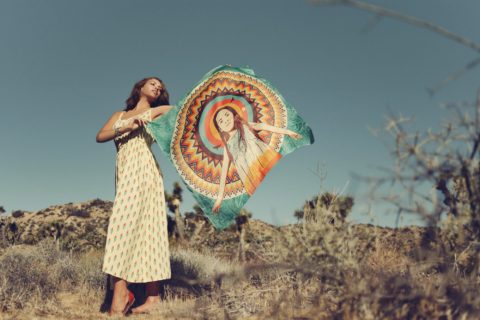 I was travelling through India on my own when I finally decided I wanted to look like all the beautiful women around me. So I walked into a jewellery shop in Pondicherry and stood perfectly still as a burly man in a lungi pushed a stud through my right nostril with his bare hands. Today, that piercing is a time-stamp on my body of when I decided to own my South Asian heritage. Finding beauty in your ancestry isn’t easy. It takes time, effort and inspiration. This process can be all the more challenging when your culture is seen through the appropriated lens of an outsider, which for First Nations and Indigenous people has meant seeing their regalia and iconography used as creative fodder without credit, compensation or respect.

Today, a wave of First Nations and Indigenous designers are layering their designs with political and cultural messages. Bethany Yellowtail, Crow and Northern Cheyenne designer of the B.Yellowtail label, describes her Maiz Sun Dress as being made in “occupied Tongva Territory (Los Angeles).” Shoshone-Bannock and Luiseño artist Jamie Okuma describes her hand-beaded Christian Louboutins as “moccs for the 21st century.” And Winnipeg Métis entre­preneur Sean McCormick’s Manitobah Mukluks have become so popular that he’s expanded overseas.

That type of success is any designer’s dream, but Amber-Dawn Bear Robe, an art historian, curator and professor at the Institute of American Indian Arts in Santa Fe, N.M., says that this reflects an evolution rather than a new trend.

“The public is finally paying attention,” says Bear Robe, who hails from the Siksika Nation outside Calgary. In addition to her work at the Institute, she also produces the Haute Couture Fashion Show, on August 18, at the annual Santa Fe Indian Market. The market, which runs August 16 to 18, was founded in 1922, and is the largest juried Native arts market in the world.

“[Back then], it wasn’t cool to be Indian; now, everyone wants to be Indian,” says Bear Robe. “Then there’s social media, which did not exist in the days of Lloyd ‘Kiva’ New.” We now have brands like Reclaim Your Power, which sells empowering message tees that read “Strong, Resilient, Indigenous” and posts inspiring images on Instagram. Section 35, based in British Columbia, turns out stylish streetwear with thought-provoking phrases such as “All These Treaty Rights and Still Not Treated Right.” And on Beyond Buckskin, American scholar Jessica R. Metcalfe, of the Turtle Mountain Chippewa community, highlights designers with her Buy Native List.

The problem with increased exposure and becoming “cool” is that it leads to cultural appropriation, says Bear Robe. “When people say ‘We’re valuing and honouring your culture…’—like, bullshit,” she says. “You didn’t have to live through the hard times. You didn’t have to live through the oppression, the racism, the genocide, the PTSD, the intergenerational trauma. You’re picking and choosing the pretty things and not paying any attention to the actual history of native peoples.”

Six Indigenous Designers We Are Following

In Canada, there are Indigenous Fashion Weeks held in Vancouver and Toronto. At the recent show in Toronto (IFWTO), Warren Steven Scott, made his debut.

When I met Scott, a member of the Nlaka’pamux nation from British Columbia, at a cafe in Toronto he was working on his debut womenswear collection for IFWTO that was held in late May. After graduating from Ryerson School of Fashion in 2016, Scott began working with with Toronto’s Comrags but he says he felt “compelled” when Sage Paul, a Toronto-based Dene designer, began her work on IFWTO.

For his inspiration, Scott turned to Paul Seesequasis’ Indigenous Archival Photo Project. Using museum and historical archives, Seesequasis, a Willow Cree writer from Saskatchewan, began posting photos of Indigenous life from the 50s and early 60s. His mother, a residential school survivor, said she wanted to hear more positive stories surrounding Indigenous Canadian communities. On the feed, you see images like a group of smiling brown faces at a town hall dance, a Winnipeg office worker at her desk and three long haired teens in flannel shirts smiling from the back of a pick up. “Many other photos of indigenous people were posed images, like those of photographer and ethnographer Edward S. Curtis, where indigenous people were dressed up in ceremonial dress to look more indigenous,” says Scott. “Paul’s twitter feed is so inspiring, because they are images how my family and my community lived, my history.”

Coincidentally Scott had accessory samples on him, so we talked as he peeled adhesives off a set of laser cut acrylic pieces that he was stringing into earrings. “The shapes are basic Coast Salish ovoids,” he explained. “The kind you might see on carvings and totem poles.”

Weeks later, at IFWTO, Scott opened his collection with a prairie dress with a dainty floral print, worn overtop leggings that resemble long johns. Another look had the model in a bright windbreaker cinched at the waist. The designs echoed 90s grunge, but were also steeped in today’s love for simple fashion. The ovoid earrings in shades of red, orange or blue are worn mismatched and popped from the runway.

“My great grandmother used to weave cedar baskets, that’s two generations removed,” Scott has said when we first met. “She was the last one and it’s gone. I think we’re trying to get that back, but in our own way.”

An over the shoulder, off the shoulder view of The Honour Gown, photographed by @jayuhstin • #eveningwear #indigenousfashion

Ducharme’s stunning Atavism collection delves directly into his Indigenous heritage most notably by incorporating original historical documents into prints and accessories. The Census Print Darted Skirt shows how Ducharme’s great-grandfather was originally listed as “French,” only to have it scratched off and changed to an “Indian” tribal origin.

Wonderful!!!❤️ ⠀⠀⠀ This one Shoulder dress is very fitted with lazar cut black fringe and side slit at the hemline.⠀⠀⠀ The caplet is matching fabric in Raven comes Full Circle, the cape can be purchased separately from the dress. ⠀⠀⠀ Find at ?? www.dorothygrant.com ⠀⠀⠀ ⠀⠀⠀ #shoulderdress #dress #native #haida #haidaart #haidagwaii #dorothygrant #dorothygrantstudio #nativepride

A matriarch of First Nations and Indigenous design, Grant is inspired by how traditional Haida art can fit on the body. A recipient of the Order of Canada, Grant also dressed The Revenant actor Duane E. Howard in her Eagle Raven shawl collar tuxedo when he attended the 2016 Academy Awards.

Designer Derek Jagodzinsky (Cree, Saulteaux) founded Luxx in 2011 in Edmonton. Jagodzinsky’s was featured in the Native Fashion Now exhibit that toured the US and a collaboration with visual artist Aaron Paquette will be a permanent exhibit at the Royal Alberta Museum. Jagodzinsky plans to grow LUXX into a lifestyle brand with a dose of humour. Throw pillows read: “Don’t judge, smudge.”

A post shared by AngelaDeMontigny (@demontignyboutiquegallery) on Jun 30, 2018 at 1:15pm PDT

DeMontigny, who has been selling her designs since 1995, is known for her custom leathers, in metallics with fringe detailing. At her Hamilton boutique she also sells her jewellery and fur accessories. DeMontigny showed her recent capsule collection, ‘Of the Stars’ at London Fashion Week.

Since winning TOMs Emerging Menswear Designer award in 2016, Oland, raised in the Okanagan Valley, has been based out of London, England where he worked on Savile Row as a design and production intern for tailor Ozwald Boateng. Oland was recently selected to appear at the British Fashion Council’s International Fashion Showcase in 2019.

The Ontario-born, self taught beader incorporated traditional Metis floral beading onto the forearms and lapels of her bespoke menswear collection as part of her graduation thesis from the Ryerson School of Fashion. Woods was selected to compete at the GFW International Showcase & Swarovski International Catwalk Competition in London earlier this year.