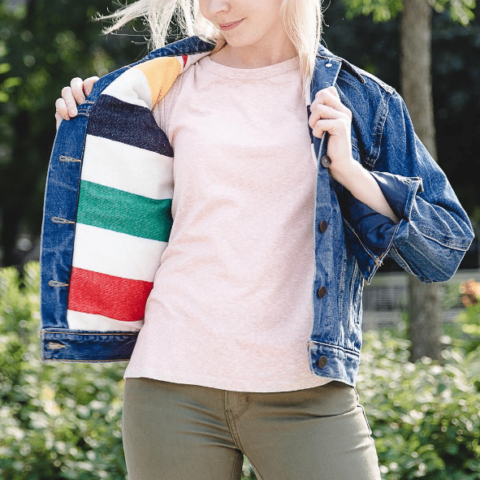 Canada is getting to play a part in Levi’s 50th anniversary celebrations of the trucker jacket. The iconic denim brand is teaming up with Hudson’s Bay company on two special edition trucker jackets (for men and women), both lined with the famed strips of the Hudson’s Bay Company Collection Point Blanket, which was first made in 1800. They’ll each retail for $148.

“Hudson’s Bay and Levi’s are two brands with deep roots,” said Jonathan Cheung, Head of Global Design, Levi’s Brand, in a statement. “This year, we’re celebrating the 50th Anniversary of our Trucker Jacket and we’ve lined it with the iconic Hudson’s Bay Company stripes. There’s something retro-cool about these jackets. It’s like a creative fist bump between two iconic companies.”

Much like the Levi’s 501 jean, the denim brand’s trucker jacket is one of the most recognizable pieces in fashion history. Levi Strauss is credited with creating the first jean jacket in the late 19th century, though it was then known as the denim “blouse.” The design featured three pleats on each side of the centre buttons that could be opened for extra room, rivets to secure front pockets and the cuff wrist openings and a riveted back cinch to further adjust size.

The jacket evolved over the decades, later identified as TYPE I, TYPE II and TYPE III, with TYPE III being the most popular and most recognized of the bunch. Then known as the 70505, TYPE III is now referred to as the trucker jacket and is worn by virtually everyone, from rock stars to truck drivers and celebrities.

Now, thanks to this collab, the icon is getting a touch of Canadiana, and we couldn’t be more excited (or proud!).