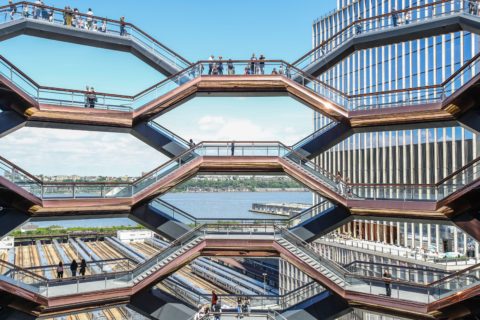 President Trump has a little something to do with it.

The fashion world hasn’t shied away from voicing its opposition to Donald and Melania Trump. Several American designers have categorically refused to dress the First Lady, many have spoken out against the President’s policies, either via social media or through their designs, and of course Anna Wintour, editor of US Vogue, famously evaded all questions about Melania Trump in a recent interview with The Economist, choosing to focus instead on how Michelle Obama is “the best ambassador this country could possibly have.” And now, designers are pulling out of upcoming New York Fashion Week (NYFW) shows scheduled at Hudson Yards, because of its connection to Stephen Ross, a billionaire who recently hosted a fundraiser for Donald Trump’s re-election.

Ross, as Chairman of real estate firm Related Companies, has ties to a wide network of companies and investments in New York. So the fallout from the news report that he would be raising money for Trump was swift. Initial reactions focused more on the billionaire’s involvement with Equinox and SoulCycle, with members around the US as well as Canada cancelling their gym memberships in protest of Ross’ support of an administration rooted in bigotry and hate. But Ross’ investments span far and wide, covering far more than the fitness industry. He’s also an investor in the Momofuku empire and its beloved Milk Bar, which prompted its chefs—David Chang and Christina Tosi, respectively—to issue statements clarifying that their political ideologies do not align with Ross’ and that they don’t support the Hamptons fundraiser that reportedly raised $13 million for Trump’s 2020 re-election campaign.

It has since emerged that Ross is also a key investor in the newly opened Hudson Yards shopping complex in Manhattan. Prabal Gurung, a Nepalese-American designer who has been fiercely vocal about his opposition to Trump, was scheduled to hold his 10-year anniversary show at The Vessel at Hudson Yards, but has since pulled out. In a long Twitter thread he outlined his dismay at learning of Ross’ involvement with a Trump fundraiser, writing that the “dangerous and hateful culture” of our times “is fuelled, inspired by President Trump’s ugly, divisive racist rhetoric” and that Ross’ support “is appalling, shocking but & an indication of their integrity & values.”

7/10: My goal here is to start a dialogue and maybe, hopefully, change some minds.
I was previously in conversation with Hudson Yards’ The Vessel as the venue for my brand’s upcoming 10 year show during NYFW. When I heard about this fundraiser, I chose to pull my participation.

Rag & Bone, another New York-based fashion brand, has also chosen to sever ties with Hudson Yards in light of the news. According to Women’s Wear Daily, a source close to the brand has revealed that they will no longer be presenting their Spring 2020 collection at the retail site’s arts centre, known as The Shed. According to Fashionista, 10 labels were set to show their spring/summer collections at Hudson Yards, which opened to the public in March, but there’s no word yet on whether the remaining brands plan to go ahead as scheduled.

The Stephen Ross web does not end there. The billionaire’s wife, jewellery designer Kara Ross, is a Council of Fashion Designers of America (CFDA) board member. In protest of Ross’ involvement with the CFDA—which organizes New York Fashion Week—Dana Lorenz, founder of jewellery label Fallon, has chosen to withdraw her membership from the organization. In a formal letter to CFDA chairman Tom Ford and CEO Steven Kolb posted on her Instagram account, Lorenz writes, “After many years of membership, I will no longer participate if a woman that funds the current administration remains on the board… I do not feel her views speak for me as a member and I will not allow her to make decisions on my behalf.”

Dear Mr. Ford, Mr. Kolb, members and board of the CFDA, Effective immediately, I regretfully but with great certainty, cancel my membership to the Council of Fashion Designers of America. After many years of membership I will no longer participate if a woman that funds the current administration remains on the board. I will no longer be a part of what seems to be allowing a pay for play, money over merit arrangement with someone that clearly wants to advance an agenda that is hurting many businesses large and small with this trade war. I do not feel her views speak for me as a member and I will not allow her to make decisions on my behalf. I thought about this decision well, and although I appreciated support in the beginnings of my career, I no longer feel the membership represents me. I will fondly remember hearing I was nominated for a CFDA Award, I will gratefully remember my time as a CFDA/VOGUE Fashion Fund nominee, and I will always be thankful for your ear, Steven. However, after emailing you about concerns as to the board seat of Mrs. Ross I was met with a response that felt very much like the pacifying public statements from SoulCycle and Equinox. I was told “not our problem” and to focus my energies elsewhere. So I will. The annual membership dues and future high priced tickets to awards will be spent fighting what this administration is destroying, specifically equal rights and climate change. Yesterday, while Mrs. Ross was putting finishing touches on her Trump fundraiser, I was making sure my sobbing housekeeper had her entire family’s documents in order, a woman with 3 years citizenship living in fear. It is not enough to post rainbows on your Instagram feed. Do something. As a side note, the Fashion Fund is irrelevant unless it is entirely made up of sustainable designers. FALLON JEWELRY

She adds that though she reached out to Kolb regarding the matter, her concerns were met with a “pacifying” response. “I was told “not our problem” and to focus my energies elsewhere.” So Lorenz did just that, choosing to direct the money she would have paid in membership fees and awards show tickets towards “fighting what this administration is destroying, specifically equal rights and climate change.” If ever there was a time to stand up for what you believe in, it’s now. Kudos to these New York designers for choosing to raise their voices in protest, and putting their money where their mouth is.

Photography by Vanessa Carvalho/Shutterstock
Get the best of FASHION in your inbox Thanks for signing up!
The latest fashion, beauty and celeb news delivered right to your email #FASHIONforall Now, check your inbox to complete your subscription
We won’t ever use your email address for anything else
Want even more FASHION? Follow us on social media.