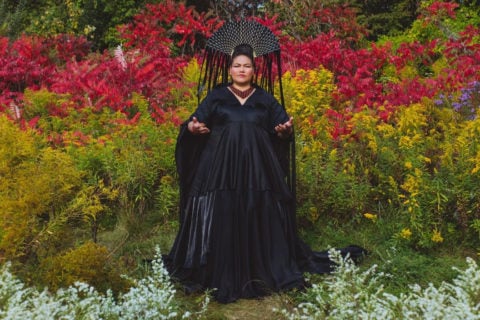 Here’s What to Expect During Indigenous Fashion Week Toronto

Tomorrow marks the launch of the event's all-digital programming.

Starting tomorrow, you’ll be able to shop, experience and engage with Indigenous design thanks to the virtual reconceptualizing of Indigenous Fashion Week Toronto. Founded by creative Sage Paul and first launched IRL in 2018, the upcoming four-day digital event sees the return of the IFWTO marketplace, which this year highlights wares from Reena Larabee, Sheila Demerah, Tracy Toulouse, Lesley Hampton, Indi City and more.

Speaking to the digital pivot, Paul says that “this move is the kind of change we’re seeing around the world and marks a precedent for the human need to gather, interact and share. For this year’s festival, I hope the audience feels that powerful shift in a positive way through the fashion and textiles programming featuring Indigenous designers. I know our community is resilient, and I see that shining in the evolution of this year’s IFWTO.”

A post shared by INDIGENOUS FASHION WEEK TO (@ifwtoronto)

As Paul mentions, in addition to the marketplace the IFWTO schedule offers programming including a conversation with artist Christi Belcourt – who recently launched collaborations with Cheekbone Beauty and Katrin Leblond – and a panel discussion about supporting the next generation of Indigenous designers which will be moderated by Riley Kucheran, an Assistant Professor of Design at Ryerson University, and features perspectives from academics Adrienne J. Keene (Brown University), Dori Tunstall (OCAD), and Dr. Ben Barry (Ryerson University).

It wouldn’t be fashion week without a glimpse at collections, and designer presentations will also take place over the course of the four-day itinerary including the work of Miss Chief Rocka, Mobilize Waskawewin, Skawennati, Margaret Jacobs, Warren Steven Scott, Evan Ducharme and Curtis Oland. You can also catch a preview of the digital art exhibition, A Thread That Never Breaks, that’s set to be launched early next year – making the IFWTO platform one committed to bringing Indigenous design to the forefront on an ongoing basis.

Photography courtesy of Red Works.
Get the best of FASHION in your inbox Thanks for signing up!
The latest fashion, beauty and celeb news delivered right to your email #FASHIONforall Now, check your inbox to complete your subscription
We won’t ever use your email address for anything else
Want even more FASHION? Follow us on social media.