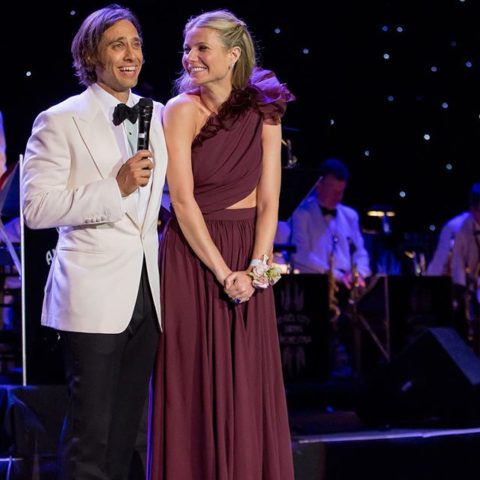 Gwyneth Paltrow and Brad Falchuck hosted a star-studded event over the weekend. The couple, dating since 2014, celebrated their engagement with a black-tie party at the Los Angeles Theatre. Paltrow had only just returned from a bachelorette vacay in Mexico, but the festivities immediately continued.

A source described the venue to People, revealing a ballroom brimming with fragrant flowers. The atmosphere embodied romance and Paltrow was dressed for the occasion, donning a custom Giambattista Valli gown. The dress, which is similar to a black number seen in Valli’s Spring 2018 Couture show, has a flattering side cut-out mirroring the one-shoulder silhouette. A long side-slit revealed nude heels under the rich burgundy fabric.

A post shared by Giambattista Valli Official (@giambattistavalliparis) on Apr 16, 2018 at 5:47am PDT

Giambattista Valli’s designs have been spotted all over the red carpet recently, worn by A-listers like Rihanna, Zendaya (below) and Kendall Jenner. Celebrities flock to the designer for his timeless, ultra-feminine pieces and these romantic creations make him the perfect choice for a bride-to-be.

A post shared by Giambattista Valli Official (@giambattistavalliparis) on Mar 4, 2018 at 5:01pm PST

Paltrow accessorized with classic diamond earrings and — of course — her ginormous sapphire engagement ring (estimated to be worth up to half a million dollars). She looked fresh-faced and rosy-cheeked arriving at the party — the sign of a blushing bride?

Rumour has it that the engagement party might have been more than it initially appeared to be. Paltrow’s mother, Blythe Danner, was photographed leaving the event with a garment bag from bridal designer, Monique Lhuillier. These images sparked a frenzy of speculation. Did the two actually tie the knot? Was there a dress change behind-the-scenes? There’s been no confirmation yet, but a recent post by Paltrow makes it seem like she kept the Giambattista Valli design on (and also added a corsage!)

We see this as positive, this gorgeous oxblood gown deserved to be more than just an entrance look!

PHOTOGRAPHY VIA INSTAGRAM/@GWYNETHPALTROW
Get the best of FASHION in your inbox Thanks for signing up!
The latest fashion, beauty and celeb news delivered right to your email #FASHIONforall Now, check your inbox to complete your subscription
We won’t ever use your email address for anything else
Want even more FASHION? Follow us on social media.