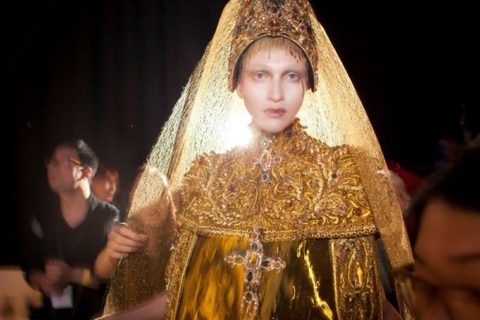 Chinese designer Guo Pei may not have even heard of Rihanna until the superstar decided she wanted to wear one of her creations to the Met Gala in 2015 (the year the theme was ‘China: Through the Looking Glass’), but she will remain forever indebted to her for imbuing one of her favourite creations—a scene-stealing gold cape—with a second life. In the new documentary Yellow is Forbidden, the designer recalls the show in which an overtly nervous model wore the heavy piece down the runway. “Her performance made me sad. Painfully and slowly she finished the runway. The show ruined the dress and I would never have had a chance to make up for it. I’m grateful to [Rihanna] from the bottom of heart.”

mood via the black frozen

The designer, celebrated and applauded in her home country, came to worldwide notice after the Met Gala, prompting documentary filmmaker Pietra Bretkelly to follow her, on and off, for nearly two years for the film Yellow is Forbidden. As the film screens at Toronto’s Hot Docs Festival this week, we caught up with the director to learn more about her experience chronicling a series of major moments in Guo Pei’s life: as she became the first Chinese designer to receive an invitation to become a guest member of the Chambre Syndicale de la Haute Couture (like a Michelin star for fashion, but way, way more elite), her first Paris couture show, and her inclusion in the Time 100 list of Most Influential People in the World.

Most of the world first discovered Guo Pei when Rihanna stepped on to the 2015 Met Gala red carpet in that showstopping gold cape. Were you familiar with her work prior to that moment? What made you decide you wanted to do a documentary film with her as subject?
After completing A Flickering Truth [her 2015 documentary set in Afghanistan], I collapsed on my couch and ate feijoa crumble for two weeks (a fruit that appears on our trees in New Zealand every April and May and is something very special). But I was ready to find something female, creative, and once again delve into a language I didn’t understand, a practice I love to combine with cinema verite, to see what I can discover across cultures and languages. In this case, I sought to find the essence of this artist.

I had read some years ago of these crazy shoes Guo Pei made, and loved that a small world, a little scene, is carved into the heel. Years later at the supermarket [after the 2015 Met Gala] I read of the Rihanna dress and what struck me was the admission from Guo Pei that she didn’t know who Rihanna was. That intrigued me. I found a phone number for her, checked the time difference and dialled. On the third call I got someone who spoke English and though she politely tried to dissuade me, saying that Guo Pei was very private, that I wouldn’t get the intimacy I needed for my film, I insisted I come to visit. Three days later my Director of Photography Jake Bryant and I flew to Beijing for a meeting with Guo Pei and her husband and manager Jack Tsao. After an hour of talking, of me being very upfront with the commitment and expectation I have of the subjects when I make a film, of giving them DVDs of our past films and a box of New Zealand chocolates, Guo Pei agreed and we began filming. I said I didn’t know how many years it would take. The chocolates sealed the deal.

This was your first time directing a documentary about fashion, and specifically, the very pinnacle of fashion – haute couture. What were some of the things about the industry that surprised you the most over the course of filming?
I do think there is an assumption the fashion industry is frivolous and superficial. And I was worried I could tell a story that we’ve seen many times before on television and film. But Guo Pei is an artist—cloth and fashion are her medium but above all she is an artist—and I was relieved as she began to reveal her artistic processes. And that flowed out into the industry—the fact that this was art walking the runway. The level of respect given to Guo Pei, her team and her work was of the level I’d seen with the artists I’ve profiled over the years including Vanessa Beecroft [in The Art Star and the Sudanese Twins, 2008]. These are not off the rack, fast fashion garments and there was a reverence given to them and to her work.

I assume you don’t speak Mandarin. How does the process of filmmaking change when you can’t quite follow conversations exactly as they’re unfolding?
For me, I’m interested in people, in ‘tribes,’ and not fashion per se. In the past I’ve made films in Dari, Sudanese, Arabic and Maori to name a few; across cultures, religions, gender. It is something I look for and welcome, to be enveloped in words, sentences and sounds I don’t know. I love to feel the fear of the unknown, of a different culture and language and then to see what I can gather, what Jake, my exceptional DOP, and I can understand through common human emotions, experiences, reactions. This is part of my filmic practice as I attempt in my career, within the context of the world’s diversities, to show how similar we are, that common human needs, desires and goals transcend language but while also celebrating diversity.

Tell us what made you decide on Yellow is Forbidden as the name of the film. What about that anecdote from Guo Pei’s childhood—not being allowed to wear bright colours like yellow under Communist rule—struck you the most?
I love an intriguing title and with the Rihanna cape as the trigger for Guo Pei’s international explorations, I felt there was something very strong in this line from the lovely scene with her mother. For me it played into the history of China, Guo Pei’s personal rebellion against that history—the fact she uses yellow and gold so much in her work–but also the complexities of this woman that she also reflects on the dynasties and the regalness of China’s history through her work. There’s also something very alluring about saying a colour is forbidden – how could this be, what does this actually mean? I could see myself as a film viewer, reading this title and being drawn to watch such a film to find out the answer.

What was the most compelling thing you learned about Guo Pei the person—as opposed to Guo Pei the designer—over the course of filming?
In Yellow is Forbidden, Guo Pei goes into the cutthroat world of fashion navigating it with a humility rarely seen in artists and designers. She has a special kind of ego in that sense. She is truly anti-fashion. She is changing the world’s perception of China and she’s very aware of that. In the world’s most famed “cultural city” of Paris people don’t even know her name; suspicions and misunderstandings abound. For Guo Pei the cultural divide rears its head; she acknowledges in the film that fast fashion is dictating unreasonable terms versus her artistic and traditional vision.

When we first travelled with Guo Pei to Paris for her exhibition at the Musée des Arts Décoratifs at the Louvre, in the first few days of setting up the exhibition Europeans employed to work with her were asking me to point out the designer as they were used to designers being outspoken, dramatic even, and Guo Pei was not that person. She is quietly rebellious and not rude. She was always gracious and kind to her employees, to the models, and to those she met. But selfishly, the most unexpected thing I learnt about Guo Pei is that [she shares] the singular focus I have in my work, risking so much personally, financially and professionally to make my films, that she too relies immensely on her gut and plays with risk. Getting close to Guo Pei has encouraged me [to see] that I’m not mad or crazy!

Photography via Hot Docs
Get the best of FASHION in your inbox Thanks for signing up!
The latest fashion, beauty and celeb news delivered right to your email #FASHIONforall Now, check your inbox to complete your subscription
We won’t ever use your email address for anything else
Want even more FASHION? Follow us on social media.