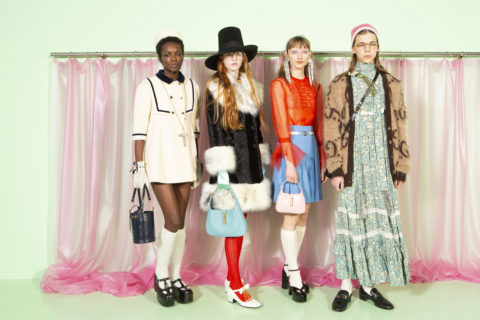 The decision was revealed in a series of excerpts from Alessandro Michele's lockdown dairies this weekend.

Update: In a virtual press conference today, Alessandro Michele has revealed more details about what the future of Gucci will look like given his announcements over the weekend. First, he will not show a collection in September of this year, however he will present a collection in July. This collection would traditionally be cruise, however Michele is renaming the offerings, now referring to this collection as Epilogue. Epilogue will run as part of Milan Digital Fashion Week from July 14-17 and “will present a story with the people from [the Gucci] office instead of the models,” according to Michele. He also confirmed that there will only be two shows a year, both of which will be co-ed.

According to WWD, Michele told press on the call, “I would like to show when I want, but I can’t. I am part of an enormous system, Gucci is an empire and I feel I am part of a system. I probably will never be able to show when I want but I can’t run to be ready in September. I would be a liar and crazy to say we would be. The system exists, I can’t pretend it doesn’t, I am not anarchic and self-managed. But five shows is complex, especially after the planet has told us that we were going too fast. I am not an expert of the industry and economy, but I feel I need to give myself some time and also to the many people working with us. Rules make our lives easier but we need fresh oxygen.”

Furthermore, the designer also revealed that the brand’s website will soon unveil a gender-fluid section whereby customers can register with the suffix MX to “buy clothes not based on male/female distinction.”

Original: Just a week after a group of designers came together to propose several changes to the traditional fashion week schedule, Alessandro Michele has announced that Gucci is pulling out of the calendar altogether and that it will go seasonless moving forward.

Michele published excerpts from his personal isolation journals from over the past few months on Gucci’s Instagram over the weekend, revealing his decision. “I will abandon the worn-out ritual of seasonalities and shows to regain a new cadence, closer to my expressive call. We will meet just twice a year, to share the chapters of a new story. Irregular, joyful and absolutely free chapters, which will be written blending rules and genres, feeding on new spaces, linguistic codes and communication platforms.” He added, “I would like to leave behind the paraphernalia of leitmotifs that colonized our prior world: cruise, pre-fall, spring-summer, fall-winter. I think these are stale and underfed words. Labels of an impersonal discourse that lost its meaning. Containers that progressively detached themselves from the life that generated them, losing touch with reality.”

5/6 • “I believe that we can build our tomorrow also starting from a renewed capacity of denomination. Here comes the desire to baptize our new encounters by naming them after a language that has marvelously ancient roots: classical music language. Accordingly, there will be symphonies, rhapsodies, madrigals, nocturnes, overtures, concerts and minuets in the constellation of my creative path. Music, after all, has the sacred power to produce reverberations and connections. It travels beyond the borders, reconnecting the fragility to the infinity.” A new path in fashion that leaves behind the paraphernalia of leitmotifs that colonized our prior world, according to @alessandro_michele in ‘The Sacred Power of Producing Reverberations’, his diary entry for May 3, 2020. #AlessandroMichele Read his diary through link in bio.

Michele also reflected on humanity’s (and fashion’s) relationship with the world in the notes, writing, “Our reckless actions have burned the house we live in. We conceived of ourselves as separated from nature, we felt cunning and almighty. We usurped nature, we dominated and wounded it. We incited Prometheus, and buried Pan. So much haughtiness made us lose our sisterhood with the butterflies, the flowers, the trees and the roots. So much outrageous greed made us lose the harmony and the care, the connection and the belonging. We ravaged the sanctity of life, neglectful of our being as a species. at the end of the day, we were out of breath.”

1/6 • “We could never have imagined to feel so connected to life through a bond of trembling and heartbreaking tenderness. We could never have thought to reconnect, so deeply, with the fragility of our creatural destiny. Our need for reciprocity. We turned out to be so small. A miracle of nothing,” We Turned Out to be So Small, March 29, 2020. @alessandro_michele wrote a diary in these months, ‘Notes from the Silence’. #AlessandroMichele. Read the diary entries through link in bio.

He also hinted at an overhaul of the brand’s sustainability practices which are expected to be announced officially by the brand today. All of these decisions, he wrote, are aimed at “building a new creative universe.” He finished the note by reiterating his passion for the industry, writing, “Now that we are still apart, my love for fashion burns. Our species, after all, is like that: we love like crazy in the throes of what is missing.”

The announcement follows similar proclamations by the likes of Saint Laurent – who has dropped out of Paris Fashion Week to show on its own schedule moving forward – and the news that both London and Milan Fashion Week will go digital this year.