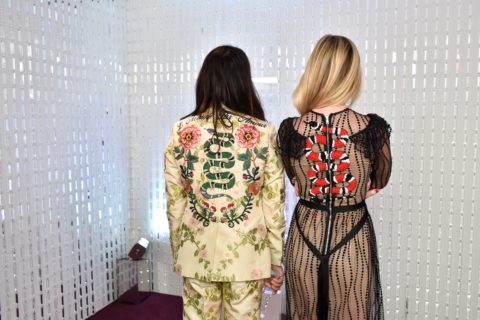 In case you missed the kerfluffle over Meghan Markle dramatically clutching her baby bump – not to mention her Royal rule-breaking maroon nail polish – last night was the British Fashion Awards.

The star-studded evening was a veritable who’s who of the industry, attended by Kate Moss, Winnie Harlow and Kendall Jenner in a risqué nipple-baring gold dress. Industry luminaries like Pierpaoli Picciolini of Valentino picked up the accolades for Designer of the Year, while Miuccia Prada earned the Outstanding Achievement Award. But it was Gucci, whose phenomenal popularity managed to snag what could be considered the most exciting title of the evening: Brand of the Year. (The award was presented to creative director Alessandro Michele by one of his muses, Lana del Rey.)

Gucci’s reputation has been flying high ever since Michele was plucked from obscurity out of the accessories department and promoted to creative director of the label in 2015. His kooky, everything-but-the-kitchen sink aesthetic has injected the industry with a newfound appreciation for irreverence and fun. His work has also kicked off a number of industry-wide trends; logomania and a return to the magpie aesthetic, to wit. Of course, its possible to argue these would have happened anyways thanks to the fact that fashion is an ever-swinging pendulum that reacts against whatever was previously cool, but there’s no doubt Gucci has played a massive role in ushering in the sea change.

Michele has stated his intentions at Gucci as bringing the brand down to Earth. Michele recounted to the T: The New York Times Style Magazine earlier this year that when he started at Gucci, “fashion was talking about something that didn’t exist anymore, this kind of posh world of beautiful legs and beautiful hair. [He] was just talking about humanity. [He] was trying to find a new energy in the street, not in the jet set.”

Below is a full list of winners of the British Fashion Council Awards.

Accessories Designer of the Year: Demna Gvasalia for Balenciaga

Special Recognition Award for Innovation: Parley for the Oceans

Brand of the Year: Gucci

Model of the Year: Kaia Gerber

Designer of the Year: Pierpaolo Piccioli for Valentino

Photo by Nick Harvey/REX/Shutterstock
Get the best of FASHION in your inbox Thanks for signing up!
The latest fashion, beauty and celeb news delivered right to your email #FASHIONforall Now, check your inbox to complete your subscription
We won’t ever use your email address for anything else
Want even more FASHION? Follow us on social media.