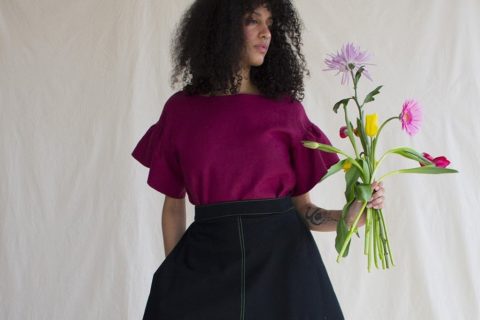 While most fashion-focused professionals will say they developed an interest in it through hours spent scouring magazines, watching movies or scrolling through social media, Eliza Faulkner—who is currently nominated for a Canadian Art and Fashion Award in its Womenswear Designer of the Year category—came to it at a young age, and through a very personal source.

Faulkner, who is originally from Canada’s west coast, grew up with a mother who made her clothes, and Eliza was very much included in the process. “She let me choose my fabrics and then she’d have to figure out what to make from that,” Faulkner says of her mother’s influence. “It’s almost like I was designing when I was a kid.”

Hewie in the Grace dress ?

Faulkner went on to study fashion design and marketing at London’s Central Saint Martins; she worked in the studios of designers including fellow Canadian Erdem Moralıoğlu and industry icon Zandra Rhodes before returning to British Columbia. Faulkner launched her eponymous label in 2012 with a collection of linen dresses; known for its strength, versatility, longevity, and the low-resource impact of the flax plant’s cultivation, it’s a material she continues to include with each seasonal offering thanks to its ecological and practical appeal.

“It’s a really nice fabric to work with,” she says. “It’s kind of become a sub-collection; every season we’ll have it because people keep coming back for it.” Right now, you’ll find Oeko-Tex certified linen used in Faulkner’s removable bow-detailed ‘Bunni’ dress, and flounce-sleeved ‘Raffi’ dress and top.

The conscientious component of design is always top of mind for Faulkner, who was nominated for a CAFA in its sustainability category in 2019. She uses deadstock fabrics in her collections when possible, and has created items like scrunchies and small bags out of offcut fabrics; she’s currently contemplating how to make masks with leftover material from her upcoming fall line.

“I’m always thinking of how we can use up all the fabric when we’re cutting,” she says of her production process, which is facilitated by a small local team. Faulkner’s mom is perhaps a point of inspiration in this way as well; growing up in New Zealand with limited resources, she says her mother was tasked with crafting everything including undergarments with whatever materials she could access.

This nod to resourcefulness gives Faulkner pause as she reflects on her time as a design student, and how much methodology has—and will—change. “It wasn’t even a conversation when I was studying,” she says when it comes to learning about upcycling and textile usage over a decade ago. “[We’ve] come such a long way.”

Eliza Faulkner is one of the designers taking part in the Wear Canada Proud Online Shopping Event, presented by FASHION and CAFA, from June 16-17. Click here for more information.