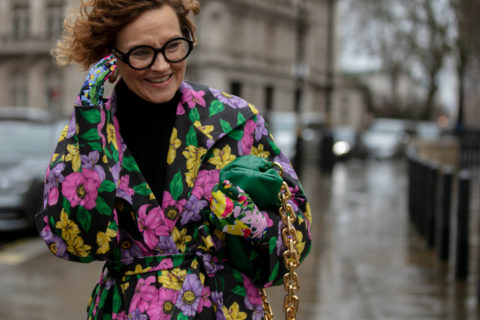 Does Street Style Have a Future in a Post-COVID-19 World?

With fashion weeks cancelling and going digital, how can the influential practice preserve its power?

After the announcement this month that London Fashion Week will launch a digital platform, a small slice of direction was given to an industry that’s been in a downward spiral for the better part of a decade. It offers hope that for creatives, there is prosperity beyond the runway calendar; and it also presents an opportunity for everyone involved to rethink, reimagine and start fresh in approaching the design, production, retail and editorial lifecycles of the pieces that allow us to express our inner character to the world. But one thing sprang to mind after hearing the LFW news and other announcements about catwalk cancellations: What would happen to street style?

It’s a medium that’s become a powerful means for press to illustrate trends, and for brands to flaunt their latest wares. It’s launched influencers into business moguls and created icons out of editors—and now it’s facing a disappearing act in the wake of social distancing, a deepening examination of how the fashion industry functions, and for the individual, what’s necessary and what’s not.

Labels have turned to telling stories about their products through social platforms because customers crave authenticity in what they consume, be it visually or through a purchase. And to save itself, street style must likewise pivot back to its original incarnation and intention, documenting what people wear—and how they wear it—in an uninhibited way, sans the intervention of the entities that capitalized on its popularity.

“It was the uniquely dressed characters on the streets of Montreal that inspired me to shoot street style,” says Sabrina Fenster, a Canadian photographer who launched her own blog, StreetScout, in 2011. “What stood out to me the most was that Montrealers all had this je ne sais quoi and their own way of putting outfits together. My goal was to share the personal style of real people, and show how it could be fun and accessible for anyone.”

Like Fenster, many street style photographers began by capturing what those around them were wearing out of pure enjoyment; it was like a treasure hunt with eye candy as the reward. “I started taking photos of people on the street for fun,” says Adam Katz Sinding, a Copenhagen-based photographer who started snapping street looks in Seattle while on his way to work, before moving to New York and professionalizing the pursuit through relationships with top American fashion magazines. (His 2018 book, This Is Not A F*cking Street Style Book, is a chronicle of self-assured attitude versus the to-be-seen peacocking that characterized street style in the mid-2000s.)

Chiara Marina Grioni, an image-maker based in London, also felt the initial thrill of the find when she started shooting street style in 2015, except she was taking photos during fashion week. “A photographer friend of mine—who has been shooting backstage for thirty years—asked me if I wanted to shoot street style for him,” she says. “I had an instant connection with [it]. It brought together many elements of photography that I loved like documenting and capturing aesthetics and movement, and things I personally loved like style, colours and my passion for shoes!”

Indeed, in its early years, street style pioneers like Bill Cunningham, Tommy Ton and Garance Doré sleuthed out the most unique ensembles and standout pieces worn by not only fashion show-goers but people simply going about their day. Their direction was fueled by the passion for and interest in how the act of getting dressed defines us all.

But as street style’s clout expanded, making micro-celebrities out of photographer favourites like Susie Bubble, Bryan Boy, Anna Dello Russo, and Tiffany Hsu, the photos became more about third-party communication than the unfettered enjoyment of fashion. “Some photographers are tasked with getting specific shots of key people attending the shows,” says Fenster. “The focus then becomes finding big names and checking them off the list as opposed to shooting because someone catches your eye.”

Additionally, there came a time when you couldn’t swing your camera without hitting a Loewe Puzzle bag or Vetements tracksuit because brands understood that street style stars were just as potent ambassadors as movie stars, singers and socialites.

In addition to the commercial strife this new marketing opportunity caused photographers whose work was being used to capture these products without compensation—not to mention creating a climate of fierce competition and undercutting rates—there began a undermining of the photos amongst those who were taking them. “With the people who came to do it not for the passion for fashion, but just to make money off of it, that diminished the integrity of the entire thing,” says Katz Sinding.

Street style’s co-opting also created a dearth in the expression of stylistic prowess, the very essence it was meant to capture in the first place. “I noticed less creativity amongst the show goers, possibly because of the over-saturation of influencers who are paid to wear specific goods,” says Grioni about how she’s noticed street style change over the years. “It felt less genuine as time progressed. For instance, last season there were two or three brands that everyone wore all the time so I couldn’t take many images without being repetitive.”

With the specific milieu in which street style has centralized in an IRL standstill, there’s no better opportunity for a recalibration of the genre; and there’s a chance for us to remain inspired by what others are wearing just by virtue of the fact that people will be out on the streets far sooner than they’ll be gathering at a fashion show any time soon.

Photographers will eventually have a chance to get back out to fertile, uncommercialized territory and document original style in all its glory. “Just like social distancing is an opportunity for all of humanity to rediscover themselves by looking inward,” says Fenster, “this will be an opportunity for photographers to get back to their roots and hit the streets to photograph real and relatable people.”

Photography by Sabrina Fenster/StreetScout.
Get the best of FASHION in your inbox Thanks for signing up!
The latest fashion, beauty and celeb news delivered right to your email #FASHIONforall Now, check your inbox to complete your subscription
We won’t ever use your email address for anything else
Want even more FASHION? Follow us on social media.