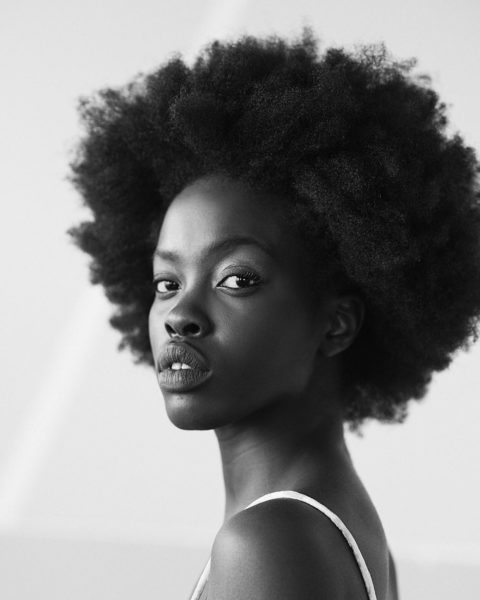 At its core, she says, her online platform Sayaspora is "an act of resilience against a biased system."

At the age of seven, Djamilla Toure learned what it’s like to be “the other.” She and her family had just moved to Morocco from Côte d’Ivoire, where a political war was raging, and she was a dark-skinned girl in a North African country where many people have lighter complexions.

“I was one of just a few Black kids in my school. To have lived in a place where I was the majority and then be a minority at seven—it was really difficult for me to navigate,” says Toure, who moved to Montreal upon completing high school. “After Casablanca, I wanted to go someplace where nobody knew me and I could define who I was.”

Toure began modelling while still a student of international relations and international law at Université du Québec à Montréal. Since signing with modelling agency NEXT, she has worked with brands including M.A.C, Want Les Essentiels and Browns Shoes. This past winter, Toure was featured in a CoverGirl campaign and wrote this caption when she shared the news on Instagram: “No one can understand how crazy this is for me. How unbelievable it is. NEVER ever my 15 year old self could have thought that this was possible for her…that this was waiting for her.”

No one can understand how crazy this is for me. How unbelievable it is. NEVER ever my 15 year old self could have thought that this was possible for her… that this was waiting for her. ⁣ ⁣ And as crazy as it sound, this brand was on my vision board for 2019. It’s a living dream. ⁣ ⁣ Working with @covergirl was pure bliss , thank you for the opportunity ?@nextcanada it’s a love story ?⁣ ⁣ For some it’s only an ad for me it’s God’s blessing. ? ⁣ ⁣ #covergirl #beauty #beautyshoot #melanin #blackgirlmagic

With her career on the rise, though, Toure notes that it’s “unfortunate” that even in 2020, makeup artists and hairstylists aren’t taught how to work with Black models’ skin and hair, which makes for uncomfortable experiences on-set. Or Black models are asked to come to the set with their hair already done.

“Most of the time when I’m booked, I’m the only Black girl,” Toure adds about modelling in Montreal. “And it’s sad because there’s this weird competition because we know that only one Black girl can be booked. But because we don’t have that many Black girls represented by modelling agencies, we know each other. And we support each other.”

“Most of the time when I’m booked, I’m the only Black girl. And it’s sad because there’s this weird competition because we know that only one Black girl can be booked.

Toure has spoken up throughout the Black Lives Matter movement about these examples of racism in the fashion industry. And the pervasiveness of the inequities is clearly fatiguing for her. “But the thing that keeps me going,” she says, “is knowing that if I’m booked for a job, somewhere a little Black girl will be able to see a young Black woman with a wide nose, big lips and an afro in an ad.”

Growing up, Toure was acutely aware of the lack of African women in mainstream media. “For me, media representation is truly key,” she says. “I believe that you can become what you cannot see, but it will take a lot of strength and a huge amount of imagination. Media has the power to make that path easier for us as minorities, whether it’s the Black woman doctor with kinky hair that they put in an ad or an Arab woman with a veil running in a Nike outfit. But while it’s great to see an ad with women from all walks of life doing amazing stuff, and men as well, I truly believe that the best representation happens in the rooms where the decisions are made—at the table where they’re creating ads and fashion shoots.”

Being young, gifted and black ~ Actively writing our own stories. ⁣ ⁣ We use cellphones to create content, laptops to create platforms and pens to reclaim what’s ours. Our creativity invades the digital space and shapes it with grace. ⁣ ⁣ We are building what we did not see growing up. We are becoming models of inspiration for the generations to come. We leverage the tools that were given to us to amplify what bothers them. ⁣ ⁣ We amplify our joy, #Blackjoy ⁣ We amplify our magic, #Blackgirlmagic ⁣ We amplify our voices, #Metoo⁣ We amplify our stories, #DiasporaSpeaking ⁣ We amplify the narration of our ancestors. ⁣ ⁣ We reclaim. ⁣ ⁣ Because even though the media shapes stories, highlights what matters to them and presents a single story to their audience, we’re done fighting to sit at tables that were not meant for us to thrive. ⁣ ⁣ We build. ⁣ ?⁣ ⁣ ⁣ ⁣ ⁣ Frame: ⁣@akembe_⁣ Mua: ⁣@_roze_glow⁣ Edit: ⁣@djamishere⁣ ⁣⁣ ⁣⁣ ⁣⁣ ⁣⁣ #africancreatives #blackcreatives #ivoriangirlskillingit #melaninqueen #bloggers225 #melaninhairstyles #melaninstyles #melaningoddesses #blackqueen #darkskinnedqueen #africangirlskillingit #lightroom #photography#vsco#team225 #explorearound #melaninart #explore #blackgirljoy

In an effort to amplify and empower Black identities and voices, in 2015—the same year she began modelling—Toure launched Sayaspora, an online platform for the African diaspora to share their stories; the site now receives freelance submissions from African women around the world. The platform, explains Toure, “gives young women the space to share their ideas and also provides a community that will read what they have to say.”

A collective of 14 women in Montreal works on the  site on a volunteer basis, with a recent grant from the Department of Canadian Heritage allowing Toure to work on expansion plans such as launching a podcast and establishing partnerships with like-minded organizations across Canada to create a wider network of voices.

“Sayaspora at its core is an act of resilience against a biased system,” she says. “It was created in response to how Black people, and more specifically women from the African diaspora, are widely under-represented in the media. As Black women, we have the experience of our own condition, and our voices need to be heard during this crucial time. Our space is a way for us to provide that.”

Photograph by andrÉanne gauthier
Get the best of FASHION in your inbox Thanks for signing up!
The latest fashion, beauty and celeb news delivered right to your email #FASHIONforall Now, check your inbox to complete your subscription
We won’t ever use your email address for anything else
Want even more FASHION? Follow us on social media.