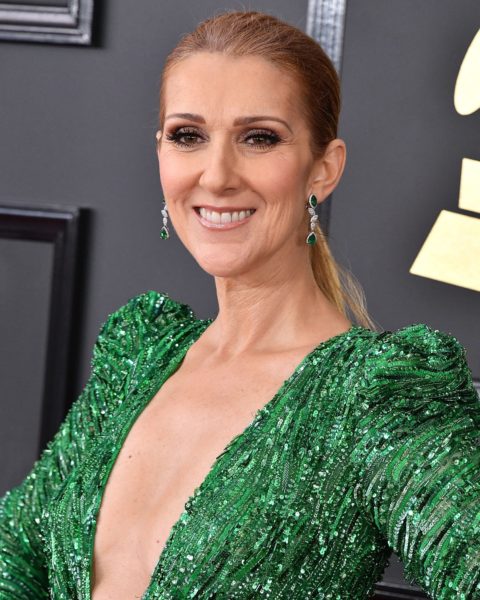 Her heart will go on—literally! Céline Dion attended the Project Women’s Trade Show in Las Vegas on Tuesday February 21, to showcase her soon-to-be-released handbag line. But the real show-stopper was the 48-year-old Grammy-winning singer—and her seriously cool loved-up look.

Dressed in a stunning Schiaparelli spring 2017 couture look, featuring a white shorts suit (emphasis on short!) with a bold red heart and arrows emblazoned on the jacket, Dion brought the wow at the press preview. Her red suede thigh-high boots had serious Pretty Woman vibes, but only an icon like Dion could werk them in such a ladylike way.

During the handbag preview, WWD posted a video on Instagram of Dion giving a shout-out to the man behind her enviable wardrobe, super stylist (he refers to himself as an “image architect”) Law Roach. In true “Céline” style, she begins belting out a song about Roach to the tune of “Na, Na, Na, Na, Hey, Hey, Hey, Goodbye.” “That’s my stylist, his name is Law,” she says before serenading her stylist who appears to be just off stage. “You’re the man,” she sings.

A Schiaparelli-clad Celine Dion pledged her love for stylist Law Roach in song today at Project in Las Vegas. Be sure to turn up your volume for this one. @celinedion @luxurylaw @projectwomens #projectwomens #ubmfashion

Her traffic-stopping Schiaparelli look is just one of many these days. Since Dion teamed up with Roach, the songstress has been on best dressed lists and has the fashion world buzzing about her impressive style evolution. She’s even been snapped wearing a Vetements Titanic hoodie during Paris Couture Week last July. An icon with an ironic sartorial twist? Yep, she’s officially the queen of the world.

Still need more proof? She arrived in Los Angeles a few weeks ago for the Grammys wearing a beyond-fab Technicolour dress, featuring a skirt made for twirling on the tarmac. The PJ (that’s “private jet” to us mere mortals) and the endless blue sky also made this ‘gram a perfect glam slam.

Dion stunned at the Grammy Awards too, in a glittering emerald green plunge-front Zuhair Murad gown. Before hitting the red carpet, she posted a video on Instagram getting a few last minute touch-ups. “Almost done,” she says, waving to the camera.

Will Dion attend the 89th Annual Academy Awards this Sunday? And if so, what will this music powerhouse wear? Stay tuned for all of our red carpet coverage.

Photography by Steve Granitz/WireImage
Get the best of FASHION in your inbox Thanks for signing up!
The latest fashion, beauty and celeb news delivered right to your email #FASHIONforall Now, check your inbox to complete your subscription
We won’t ever use your email address for anything else
Want even more FASHION? Follow us on social media.