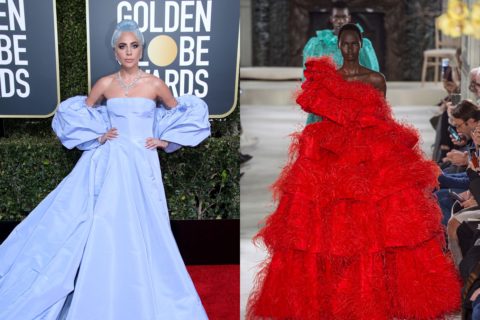 Photography via Shutterstock and Imaxtree
Style

The Spring Couture shows are perfectly timed for awards season. With just about a month between the shows in Paris and the Academy Awards, it’s basically a one-stop shop for Hollywood’s leading stylists to get a look at the dreamiest gowns of the season, and do some quick mental matchmaking to pair said couture gowns with their roster of A-list clients. Lady Gaga may have been the first to wear a fresh-off-the-runway couture gown on the red carpet (she attended the Screen Actors Guild Awards in Dior) but she certainly won’t be the last.

Read on for our wish list of the Haute Couture looks we hope to see this year’s 10 Best Actress nominees (leading and supporting) wear down the red carpet.

Yalitza Aparicio
The aspiring-school-teacher-turned-Oscar-nominee has been making the rounds this awards season sporting an eclectic mix of designers: a pastel column dress by Delpozo at the Directors Guild Awards, a metallic Miu Miu gown at the Golden Globes, mod Mulberry separates at the BAFTA tea party. As someone who seems to favour both colour and romance for her red carpet looks, this watercolour-inspired ball gown by Elie Saab seems like it might be just the ticket for the breakout star of Roma.

Glenn Close
The star of The Wife has already won the gold at the Golden Globes, the SAGs and the Critics’ Choice Awards (a prize she shared with Lady Gaga), so if you’re betting on anyone at the Oscars this year, it should probably be Glenn Close. Going by her red carpet looks over the past few months, Close has a penchant for black and white (with the occasional silver thrown in) and sleek suiting. This Alexis Mabille look takes those preferences and elevates them: a deep sapphire hue instead of black, a double-breasted cropped jacket instead of a blazer, and a sweeping skirt with pockets.

Lady Gaga
Whether it was her feathered gown at the Venice premiere of A Star Is Born or the classic ball gown complete with elaborate sleeves and train at the Globes, Gaga’s been firing on all cylinders as Hollywood’s favourite new leading lady, melding her appetite for show-stopping style statements with an air of regal glamour. Both these looks were Valentino Haute Couture, so it might be safe to assume she’ll stick with the Italian fashion house for the last hurrah of awards season. If so, here’s hoping it’s this fiery, feathery concoction. (Oh and as long as we’re wishing for things, fingers crossed she changes into this from Iris Van Herpen’s surrealist collection for the afterparties.)

Olivia Colman
Of all the sleek black gowns the star of The Favourite has worn on the red carpet recently, the Stella McCartney caped version at the Globes was a definite standout for its playful movement and subtle embellishments. For the Oscars, this Christian Dior tuxedo-inspired gown would be a phenomenal look on the British actress, with its combination of old-fashioned elegance and flirtatious charm.

Melissa McCarthy
A floor-length version of this silk Giambattista Valli number would be divine on Melissa McCarthy. We know she’s got a soft spot for jewel tones, long sleeves and a touch of glitz. This fire-engine-red gown, which offers a peek of sexy décolletage, ticks all the right boxes for the Can You Ever Forgive Me? star.

Emma Stone
It’s not often that we see Emma Stone in something other than Louis Vuitton on a red carpet (she is one of the brand’s ambassadors, after all) but every so often she’ll make an exception. This Oscars, we hope that exception comes in the form of this navy and black textural Chanel dress.

Rachel Weisz
You can always count on Rachel Weisz to balance her English Rose charm with a dash of edge, often donning pretty ruffles and tiers but in a stark monochrome palette. This sleek yet dramatic Givenchy gown—modified to have a more modest neckline—would play up all those contrasts brilliantly.

Amy Adams
This Oscar nominee (who stars as Lynne Cheney in Vice) favours understated ensembles, making this softly draped Ronald van der Kemp column gown a no-brainer. Who else can picture just how arresting these pale hues and hints of gold would look against her auburn colouring?

Marina de Tavira
We’ve seen the supporting actress of Roma in enough metallics and prints this awards season to gather that minimalist is not her vibe. Which is why this sequinned Zuhair Murad gown in a captivating turquoise hue might just be the perfect look for her.

Regina King
Regina King, nominated for If Beale Street Could Talk, is no wallflower. We’ve seen her in an effervescent pink gown by Michael Kors, a neon green Christian Siriano, and a ruffled silver Zac Posen dress. This Ralph & Russo gown delivers both sparkle and vibrant colour, both of which King gravitates towards, and comes in a sleek column silhouette, another King standby. It pretty much has her name written all over it.

Photography via Shutterstock and Imaxtree
Get the best of FASHION in your inbox Thanks for signing up!
The latest fashion, beauty and celeb news delivered right to your email #FASHIONforall Now, check your inbox to complete your subscription
We won’t ever use your email address for anything else
Want even more FASHION? Follow us on social media.