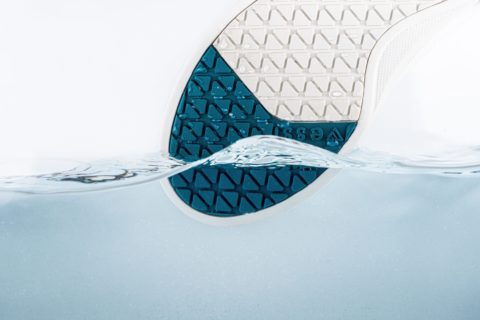 A portion of proceeds from deposits will go to a variety of mental health-focused organizations.

Talk about making a splash: Since its initially crowdfunded products were introduced in 2017, innovative B.C.-based footwear brand Vessi – co-founded by Andy Wang, Tony Yu and Mikaella Go – has gained a legion of loyal fans. “We wanted to create a shoe that you can wear comfortably through any season,” Go says of Vessi’s selection of styles, which today got an update with the release of the Weekend Sneaker. This latest design has a new pull-tab feature, as well as the waterproof and vegan fabrication the brand is known for.

Go highlights the versatility of Vessi’s offerings as being key to its success. “[They’re] something you can dress up or dress down,” she notes, adding that a variety of professions rely on ready-for-anything shoes including nurses, dog walkers and bartenders. Those who prefer life off the beaten path are also avid customers. “It evolved past needing [them] for rain to this idea of being free to do whatever you want every day, without having to worry about anything,” she says.

Outreach has also been a core part of the young brand’s rapid growth. “We always ask [our] community before we make something,” Go says, highlighting everything from colour selection to creating a slip-on style as something the team has taken heed of during the design process.

Vessi is also committed to outreach in other ways, with philanthropy being an important pillar of its philosophy. “We want to give back to the community we grew up in,” Go says. In addition to having its Community Fund, where organizations can pitch to become part of Vessi’s give-back pricing structure, the launch of the Weekend Sneaker affords customers the chance to donate $5 from their deposit on the shoe to one of four mental health-focused groups: The Trevor Project; To Write Love On Her Arms; the Brain & Behaviour Research Foundation; and the Canadian Mental Health Association. “With 2020 panning out this way and mental health being one of the things we want to bring awareness to, it was a very easy decision to do this campaign,” Go says.

While the brand itself re-calibrates and responds to shifting consumer demands over the course of the year–Go says that plans to open brick-and-mortar locations have been put on hold for the time being, but adds that instead of having to let employees go during COVID-19, they’ve hired more–she has maintained an optimistic attitude, and uses hours while being unplugged to refresh her perspective.

“I promised myself–and my boyfriend–that every month, we’d get away from the city,” Go says of how she’s tried to alleviate the many mental effects of being in quarantine. “[It’s about] putting our phones away and being present in the moment. It’s really helped me reset my thoughts.”