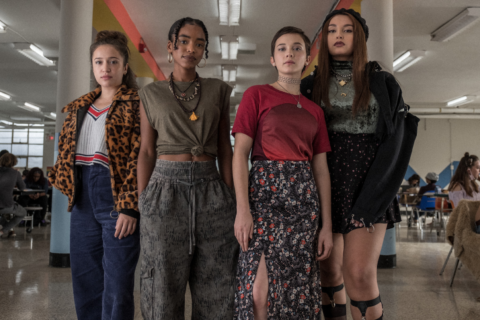 “I definitely dressed a little Craft-influenced in high school and into my early twenties,” costume designer Avery Plewes says when asked about what the movie’s memorable wardrobing meant to her. Plewes­ – who won a CAFTCAD award earlier this year for her work on Ready or Not – was part of the crew who contributed to The Craft: Legacy, a new take on the 1996 cult classic film that centered around the story of four young witches who weren’t just dealing with the perils involved in making magic, but also the trials and tribulations that teenagers endure from bullying and alienation to unrequited love.

The new Zoe Lister-Jones-directed 2020 iteration isn’t a remake, but rather a re-envisioning for contemporary times. And for that reason, Plewes resolved not to simply fall back on the ‘90s styles worn by the original cast. “Something I wanted to do with this movie was to not re-create what had already been done” Plewes notes.  “I didn’t think that was a good idea. I wanted each girl to feel like an individual, so I grew on that based on the elements that they represent.”

Plewes began by selecting crystals for each of the four main cast members – ones that connect to the ‘elements of ritual’ each girl symbolizes (earth, fire, air, water); then she built a current, Wiccan-worthy wardrobe around them. Lily, the central character played by Cailee Spaeny, is ‘water’ in the film, so Plewes selected aquamarine as her crystal and assembled a wardrobe featuring blue tones, tie-dye pieces and pearly accessories (fun fact: a pair of earrings Lily wears consistently throughout the movie were procured from landmark Toronto vintage destination, Courage My Love).

Lourdes, played by trans actress Zoey Luna, embodies ‘earth’ and her malachite-influenced looks are composed of many pieces done in plaid and velvet (with the colour green featuring heavily, naturally). The fiery, sunstone-inspired wardrobe for Tabby, played by Lovie Simone, boasts lots of colour-blocking, orange camo and flame-detailed accessories. And Frankie, played by Gideon Adlon, has an eclectic sense of style that Plewes says represents the kind of “chaos” that comes during the impressionable years when we’re finding ourselves. “You might try a bunch of different styles that seem inconsistent,” Plewes says of teenage style–and this flux pairs perfectly with Frankie’s element of air (which was matched with amethyst).

Plewes says she found additional insight for the costume design in one of her “all-time favourite” books by Sam Knee called Untypical Girls: Styles and Sounds of the Transatlantic Indie Revolution. “I brought the book to my interview for getting the job,” she says. “[It’s] just a real way of looking at how ‘outcast’ girls dress.” The allure of the outsider is perhaps why the pull of ‘90s fashion still lingers, even though Plewes resisted mimicking outfits and instead looked to the decade as a fount of inspiration.

“I think it was the era of subcultures,” she says of why we’re still drawn to that era of supermodels, sportswear and neon crop tops. “There were all of these subcultures that came to the forefront of society, and it was a time of mixing a lot of eras; it’s when vintage became something that was really cool. Historically, wearing things that were old was never really en vogue until you hit the ’90s. Then there was a permission to mix and match things in a way that wasn’t ever allowed before.” (Speaking to the potency of designs from eras past, Plewes referenced the work of Paco Rabanne when developing a dress entirely made of safety pins for Lourdes to wear during a house party scene).

Just as Plewes felt a calling to navigate each character’s sense of style in a way that exemplified their element, she also wanted to explore something that she felt was lacking in a lot of teen movies from the past. “Something that was important to me, and what I think has historically been lacking in teen movies with female leads, is an exploration of gender through style,” she says, adding that when she and three friends – her “little coven”, as she calls them – were dressing throughout adolescence, “there were days I wore really short skirts and fitted clothing, and others where I’d wear baggy, oversized t-shirts and baggy pants. When you’re a teenager, you’re really figuring out who you are, and [discovering] your sexuality and gender identity to a certain extent. I wanted young people to see that exploration visually, through the clothes. When you have young women on camera who wear only one sort of style of clothing or only adhere to one certain style, what we end up with is seeing women as very one-dimensional [figures] within society.”

Given this, The Craft: Legacy is sure to have the same kind of impact on the teens of today as it did for the generation before – but no only because of its sensitive and nuanced take on style. The 2020 film also amplifies the same powerful messaging as its predecessor. “The way the girls were empowered in the original movie resonated more with me than some of the other teen movies I grew up watching,” Plewes recalls. “[These] young girls were given permission to be empowered, but also to be weird. I’ve always felt like a bit of an outcast, so I think that’s why it resonated with me.”

Plewes was also able to keep another connection to her youth close during the movie’s filming in Toronto, as her long-time friend, Aerin Fogel – an astrologist, tarot reader and the founder of the music-centric Venus Fest – was hired as an on-set witch consultant. “There’s often a divide with work and personal life and friends, especially in film because you have no personal life,” Plewes says with a laugh. “To do this project that was so special to both of us, and to have her be witness to what I do and vice versa, was really special and kind of a testament to the movie as well, in terms of that idea of women supporting women.”

This notion is definitely a timely concept, and Plewes also highlights how of-the-moment another theme in the film is given the context of 2020. “You see four young women who’ve had to overcome things, and they found each and they thrive,” she says. “Everyone is trying to find ways to thrive right now. We’re at a point in society where people are very divided, and the coven represents people finding camaraderie and support.”