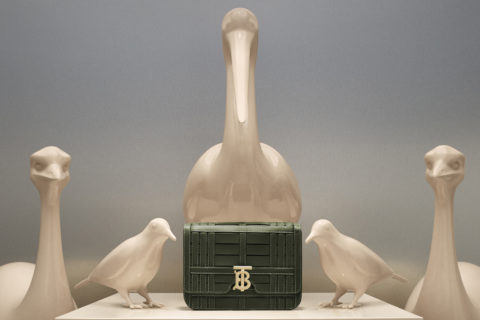 Today, Burberry is opening the first of its Animal Kingdom pop-up stores in Canada at Holt Renfrew in Vancouver.

Punctuated by large-scale sculptures of monkeys and birds of paradise, the pop-up aims to welcome customers in to the world of Burberry and its long-standing connection to the animal kingdom. Since its birth, the brand has been represented by the emblem of a knight on a horse (a choice made by founder Thomas Burberry) – a code which current chief creative officer Riccardo Tisci has built upon since joining the house back in March of 2018.

Most recently, Tisci brought the Animal Kingdom theme to life in the brand’s first ever bag campaign featuring Bella Hadid who transformed into a panther for the shoot. In a release, the designer said, “Animals have always been a creative obsession and signature of mine,” so it’s fitting that he would bring this vision to life in-store.

The pop-ups will house some of the brand’s signature products, including limited edition styles of each. The brand’s newest handbag silhouette, the Pocket Bag, will be on offer in the medium size in canvas with black, navy and dark green leather trims, in the mini size in canvas with orange and pink accents and in monogram-flocked colour pairings including yellow and blue, red and blue, yellow and orange and green and charcoal. The TB Bag, which was inspired by Thomas Burberry, will also be available in a variety of exclusive new colourways including smooth navy leather (in medium) and crimson and pecan (in small). There will also be exclusive colourways in the bag’s textural varieties (like quilted monogram leather, woven leather and two-tone canvas).

In addition to its bag offering (which also includes The Robin and its bucket bags), the pop-ups will also be home to a line-up of exclusive silk scarves, jewellery, leather AirPods cases, crossbody leather phone cases and compact card cases.

The Burberry Animal Kingdom pop-up officially opens in Canada today at Holt Renfrew in Vancouver, and will then travel to Holt Renfrew Ogilvy in Montreal on September 5 before landing in the brand’s standalone store on Bloor Street in Toronto on October 26, followed by its store in Toronto’s Yorkdale shopping mall on November 26.

Photograph courtesy of Burberry
Get the best of FASHION in your inbox Thanks for signing up!
The latest fashion, beauty and celeb news delivered right to your email #FASHIONforall Now, check your inbox to complete your subscription
We won’t ever use your email address for anything else
Want even more FASHION? Follow us on social media.