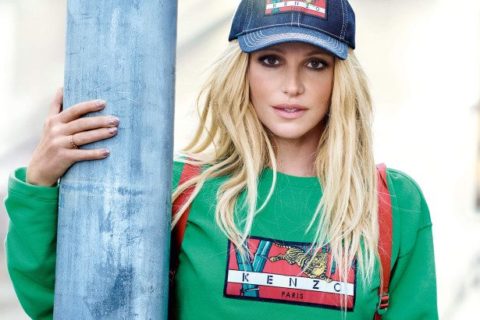 Britney Spears is memorable for lots of things – dancing with a giant snake named Banana at the 2001 VMAs, kissing Madonna at the 2003 VMAs and the infamous shaved head moment in 2007 – but it’s the Canadian tuxedo dress she wore to the 2001 American Music Awards, matched to Justin Timberlake’s three-piece denim suit that will forever mark her place in the annals of fashion history.

BRITNEY SPEARS is the quintessential queen of denim and the new face of @kenzo, photographed by @therealpeterlindbergh. Visit KENZO.com to discover the new iconic campaign. @britneyspears @kenzo #KenzoLovesBritney #KENZO #CollectionMemento2

Now, Britney Spears is revisiting her penchant for head-to-toe denim in a new campaign for Kenzo, shot by Peter Lindbergh. Looking as young and fit as ever, Britney dons a denim jacket paired with denim underwear and lace-up denim thigh-high boots, nodding her cap toward the camera as if she were mouthing the words, “So let me go, and just listen,” before launching into a rousing rendition of Slave 4 U.

“Growing up, [Britney] is…synonymous with denim with me. When her and Justin came out in their denim outfits, that is like an iconic look,” said Kenzo co-creative director Humberto Leon in a statement. “When we were designing the collection, I was like, ‘If I can have a dream person, who would I want to be in denim? It has to be Britney.’ Britney is the queen of denim to me.”

The rest of the campaign images strike a balance between freshness and outright nostalgia, depicting Britney looking extremely millennial in a pink, leaf-patterned outfit, and showing off her still-perfectly toned abs in a green cropped sweatshirt with her now-retro belly-button ring still visible.

BRITNEY SPEARS is the new face of @kenzo! The Queen of Pop was photographed by @therealpeterlindbergh for the new @kenzo campaign, featuring the iconic Bamboo Tiger print. Discover the campaign on KENZO.com. @britneyspears @kenzo #KenzoLovesBritney #KENZO #CollectionMemento2

Britney Spears is an unusual choice to front a luxury fashion campaign, because so much of her fame in the early 2000s was predicated on accessibility. Britney’s previous participation in the fashion industry was as the face of Candies – a mall brand – and her affordably priced drugstore fragrance line. As a down-home country girl from Kentwood, Louisiana, Britney has always been a little bit regular, a little bit outré for high fashion.

However, Britney is the perfect choice for a campaign that’s steeped in nostalgia. Kenzo La Collection Memento collection is Carol Lim and Humberto Leon’s homage to 1986, the year Kenzo Jeans debuted. What better choice of a spokesmodel than a pop star whose fame predates the rise of social media?

Once slagged for being an ‘artificial pop princess’, Britney now exemplifies realness precisely because she stands in opposition to the manicured, curated social media presence of Instamodels. Rather than a perfectly curated grid of selfies taken in sunset lighting, Britney Spears’ Instagram is unapologetically basic, boasting pictures of her son’s artwork, selfies in animal-themed Snapchat filters and twirling in girly mini dresses in the mezzanine of her gigantic home. Since retiring her Las Vegas act, Britney appears to be having a good time, her life no longer “chaotic.”

In any event, Britney Spears is finally getting her due in fashion – and not a moment too soon.