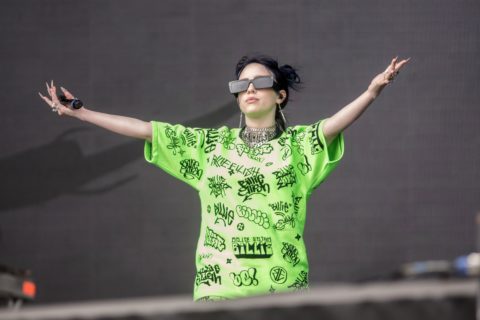 The Gen Z pop star is the face of MCM's new AW19 campaign.

In the past year, Billie Eilish has gone from being a niche teen pop artist to one of the most bankable rising stars in the music business.  In May, Eilish appeared in video for Calvin Klein’s #MyCalvins campaign extolling the virtues of her baggy wardrobe. Now, the “Bad Guy” singer has landed her first-ever high fashion campaign, as the face of MCM for the F/W 2019 season.

In the campaign images, Eilish is sporting her signature blue hair and oversized clothing alongside a series of MCM accessories. Dirk Schönberger, MCM’s global creative officer, told WWD that he chose Eilish as a model because of what she stands for. “For me, she’s a bit of a role model for younger generations, even though she would probably hate the word.” Eilish is open about who she is, and always encourages others to express themselves without holding back. “She’s a game-changer: Not only is she disruptive, but it also feels like she can’t be corrupted. It’s not a marketing trick: She is that person. She really stands out in the current music scene,” he continued.

The campaign will be officially released starting July 18th, while Schönberg’s first full collection for MCM will be introduced for spring 2020.