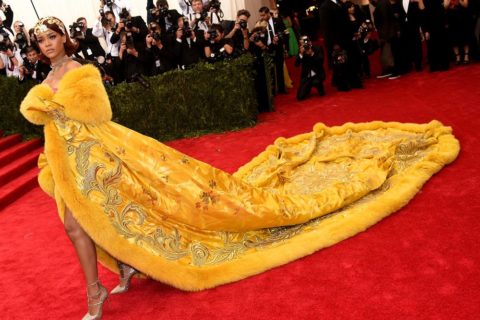 Met Gala 2017: A Look Back at the Best Outfits of All Time

For those who think the red carpet has become a drag, rejoice in the fact that the annual crown jewel of high-concept, high fashion events is once again upon us—that’s right (in Oprah voice), it’s Met Gala timeeeee!

The unveiling of the Metropolitan Museum of Art’s latest exhibition, Rei Kawakubo/Comme des Garçons, is sure to pack a punch with an avant-garde and sculptural archive guests will be clamoring to wear.

A look back to 1999 at Liv Tyler and Stella McCartney’s flimsy, one-shouldered “Rock Royalty” tees shows a major turning point in the dinner’s dress code that began with the influx of celebrity invites (brought on by Anna Wintour when she overtook chairmanship in the mid-nineties). Or how about that remarkable plaid and lace confection sported by Sarah Jessica Parker to 2006’s AngloMania exhibit opening? There will always be Rihanna‘s epic Guo Pei golden train at 2015’s party. Yes, the power to make a provocative statement on the red carpet is still alive and well, if nowhere else than at least on the Met Gala floor. They don’t call them the East Coast Oscars for nothing, after all.

With that, let’s take a trip down memory lane and re-live some of the splashiest outfits to appear at the ball throughout the years and achieve that most coveted of statuses—an honest-to-goodness, over-the-top, out-of-control red carpet MOMENT. 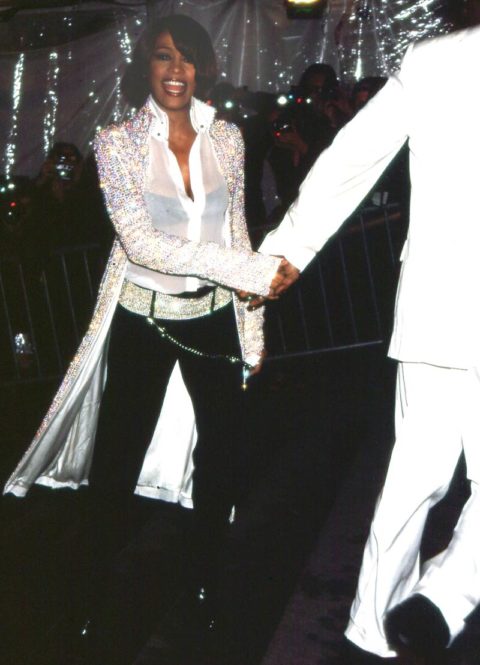 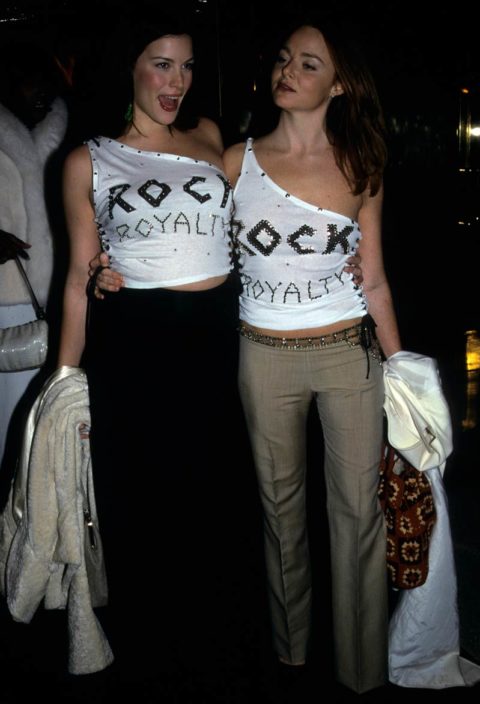 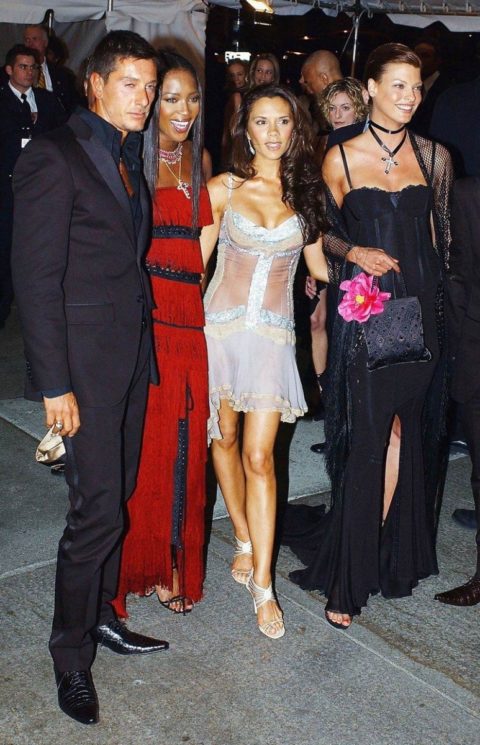 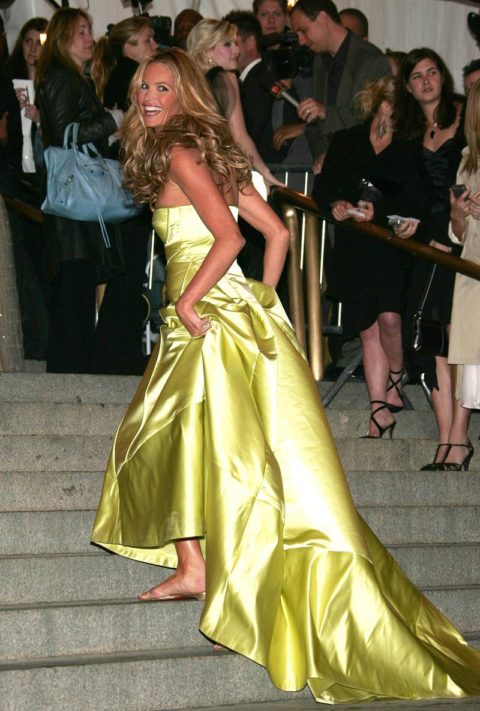 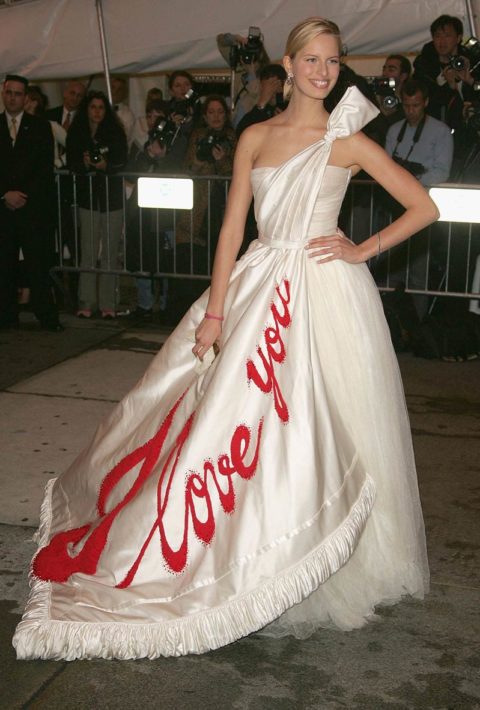 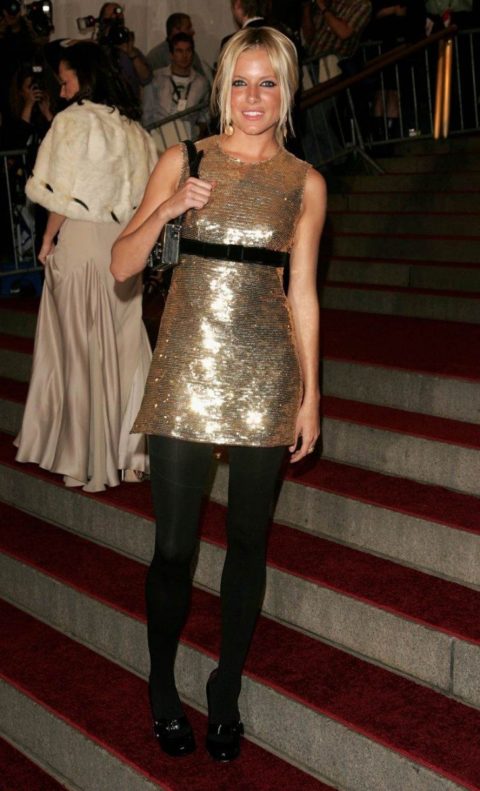 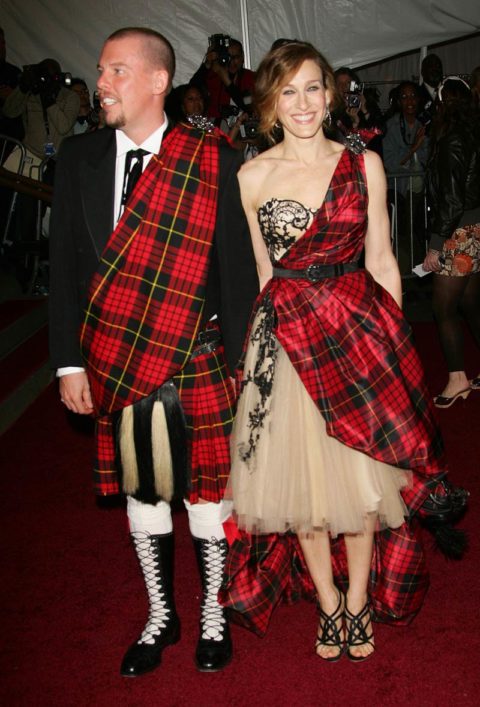 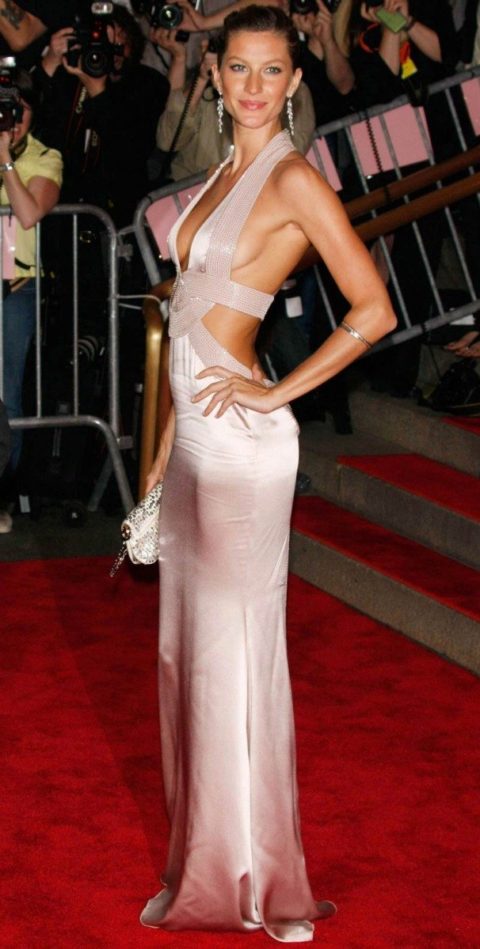 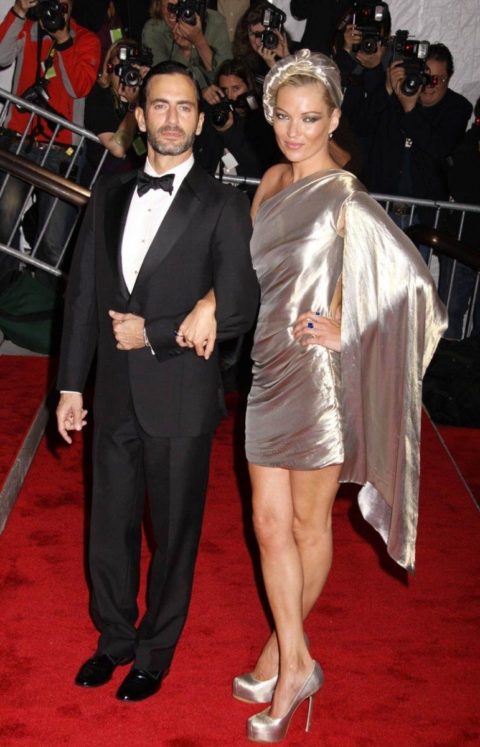 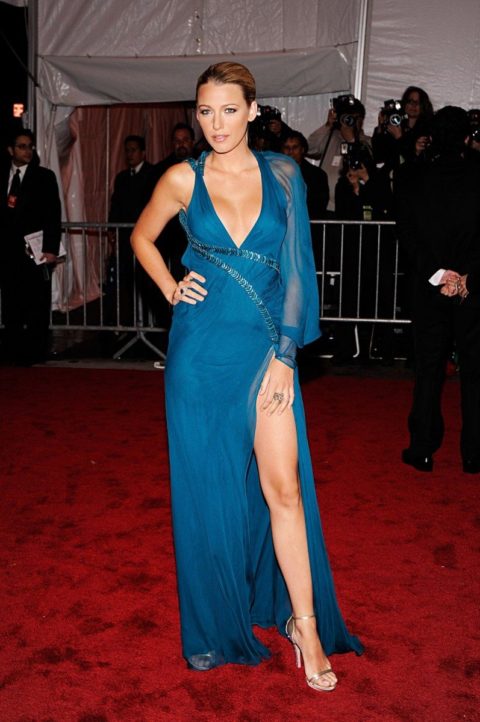 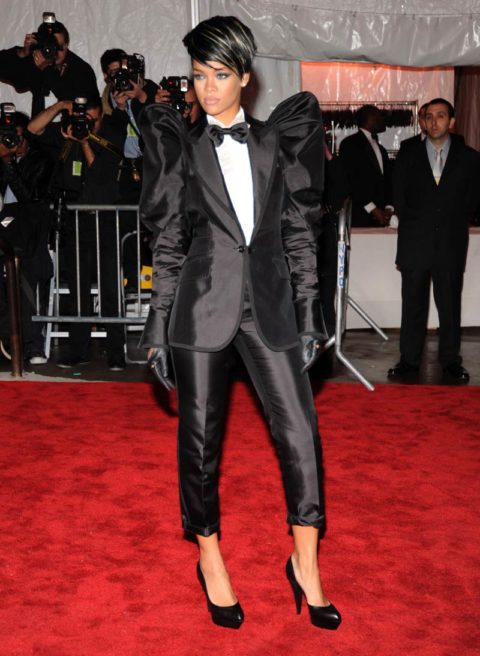 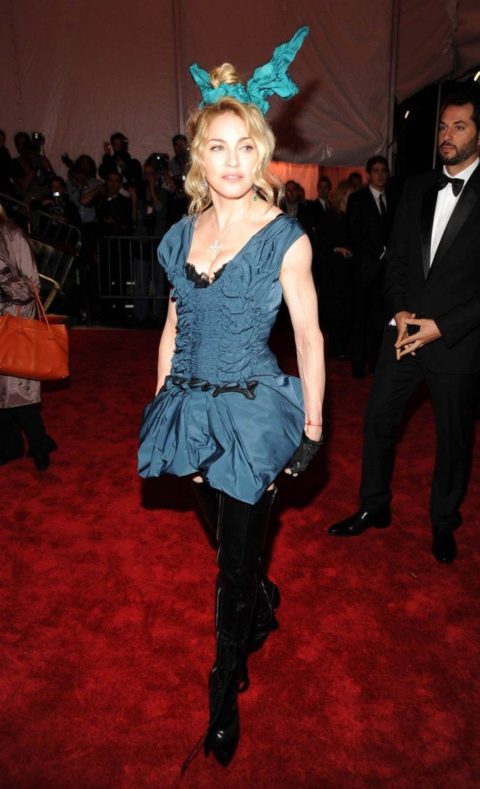 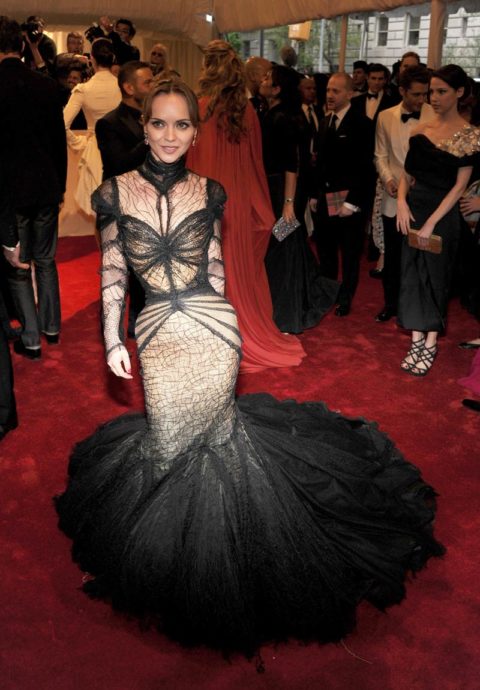 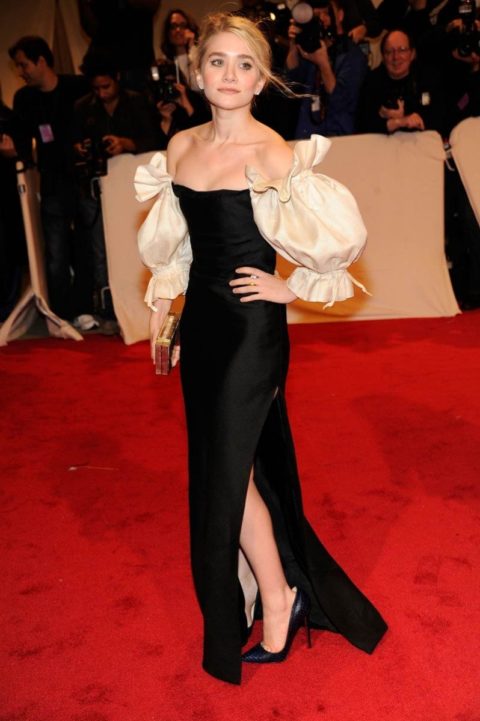 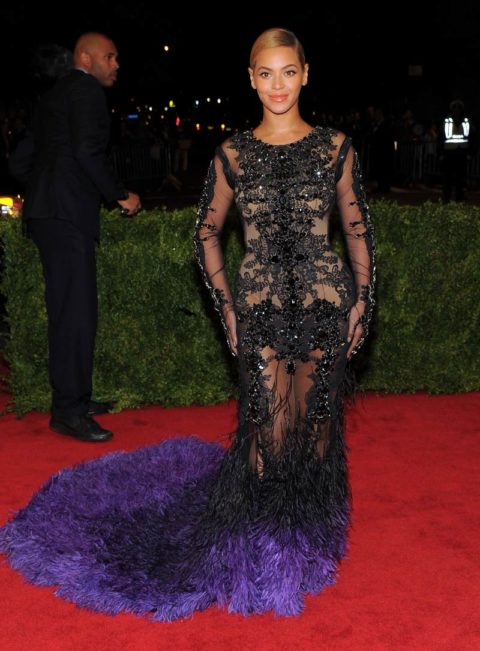 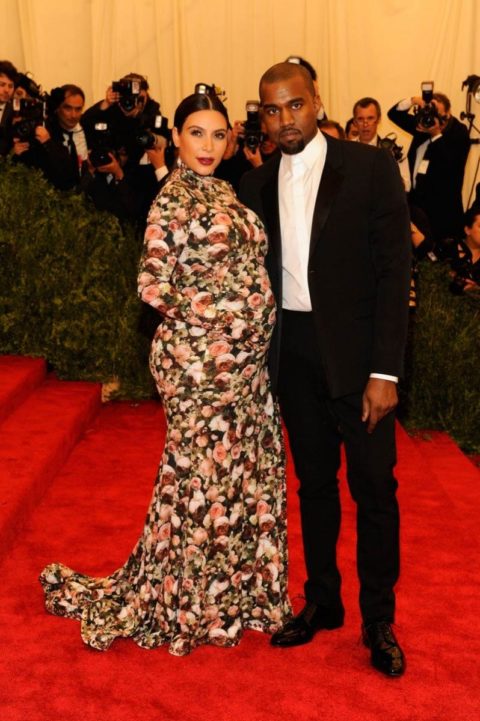 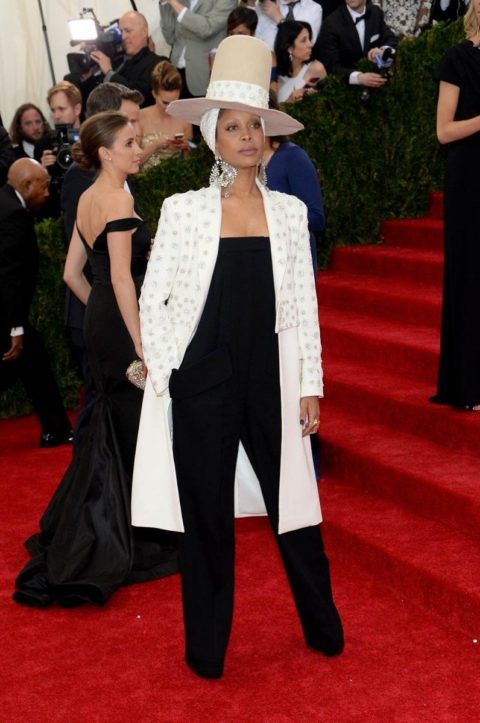 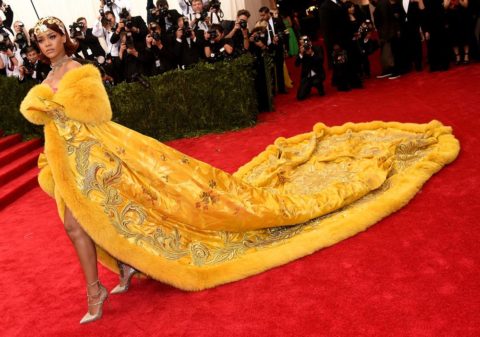 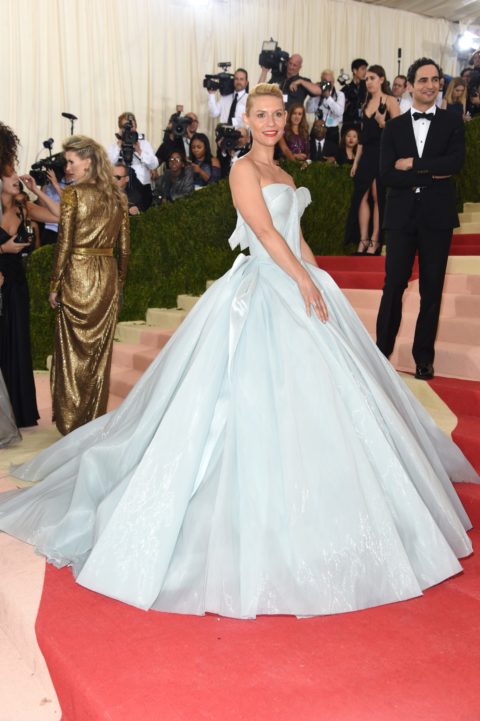 Rule #1 of bedazzling: more is more (another handy tip—waist-chains are an excellent way to keep from losing your purse).

We’re pretty sure some version of this shirt was sold at Stitches—bonus points for the laced-up sides.

There’s so much early aughts goodness here it’s hard to know where to begin: the cross chokers or the pink flower growing out of the bejeweled bag? Never mind, it’s clearly Victoria Beckham’s dress from Victoria’s Secret.

Only a supermodel could wear a chartreuse satin gown with flats and have it look this glam.

Wearing a Viktor & Rolf design that says, “I love you” to the opening of a Chanel exhibition? Can you say DRAMA?

The 2006 exhibition celebrated British fashion, meaning that this mod mini hit the nail on the head.

Juxtaposed layers of delicate tulle with fiery red tartan made for an unforgettable Met moment (it was also the last time McQueen would ever attend the event).

The side boob to end all side boobs.

With the exhibition exploring the model as designer muse, there was no one better to co-host the evening than Kate Moss, pictured here in a gold lame creation with matching turban, looking every bit the embodiment of fashion with her date, Marc Jacobs.

Paging Angelina Jolie’s leg! It seems Blake Lively was the first one to pull the showstopping stem stunt back in 2009.

Arguably one of her best red carpet looks, Rihanna went for full-on subversive sexpot in this puffy sleeved D&G tuxedo.

These pseudo-bunny ears from LV’s Fall 2009 collection were all over the editorial circuit, but only someone like Madonna could work them in real life.

The Met Gala marked the first time Queen Bey attended a red carpet event since the birth of Blue Ivy. What better way to make an entrance than in a gown fit for a queen?

Charles James gowns were famously dramatic, making this Givenchy chapeau at the opening of his Beyond Fashion exhibition fitting, given that it seems to be challenging Pharrell’s Grammy hat for world domination.

How could we leave out the canary yellow cape that was nearly as long as a NY city block? No one makes an entrance like RiRi.

It must have been easy to spot Claire Danes on the dancefloor. Her Cinderella gown lit up thanks to fiber optics sewn right in.