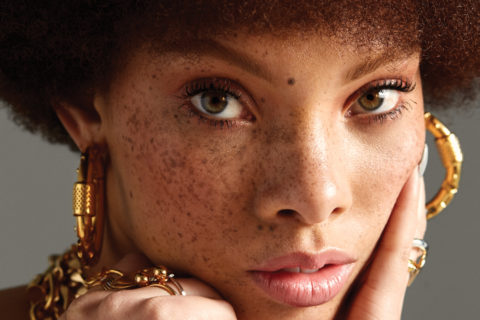 Aleece Wilson on Finding Self-Acceptance in the Modelling Industry

Borrowing from the boys is now a standard thing. But Aleece Wilson was way ahead of the trend.

“When I was little, I used to take my brother’s clothes,” says New York-based model Aleece Wilson, who grew up in Windsor, Ont. “I wanted to wear what he wore—like Dickies work clothes.” Wilson and her brother copied their dad, a truck driver who wore Dickies for work. And Wilson says she still wears the brand, which has since come out with a line for women.

For our FASHION cover shoot, though, Wilson arrived in her uniform of all-black layers—a typical off-duty-model look. But Wilson is anything but typical. With her luminous sage-green eyes and galaxy of freckles, she was snapped up as soon as she walked in the door of Toronto’s Elite Model Management in 2013. She has since travelled around the world, shooting in Barcelona and walking in a Tommy Hilfiger show in Shanghai.

“All of that is very surreal to me,” she says. “I never thought I would go to these places. We didn’t have a lot of money to travel when I was younger. So I am very thankful for all of these opportunities and experiences.”

The achievement must feel even sweeter given that Wilson was bullied while growing up—even by the three other black girls at her school who all relaxed their hair. So at about age eight, she convinced her mother to let her start relaxing her hair, too.

“It’s hard to put into words how it makes me feel to have my natural hair. I feel more like myself. I feel more in love with myself. It’s like I was never myself until now. It feels amazing.”

“She didn’t want me to, but she saw how sad I was,” says Wilson, who only recently, at 24, decided to stop. “It’s hard to put into words how it makes me feel to have my natural hair. I feel more like myself. I feel more in love with myself. It’s like I was never myself until now. It feels amazing.”

And those freckles, which drew taunts when she was a child, have become one of her greatest assets. “They’re a huge part of my look,” she says. “Sometimes [makeup artists] will cover the beauty mark by my eyebrow or the ones close to my nose. But if I catch them doing it, I’ll rub [the makeup] off.”

So how far does Wilson feel we have come in accepting different definitions of beauty? “It’s starting to evolve, but I think we can do better,” she says. This is especially true in terms of runway sizes and measurements—most samples are still created for rake-thin bodies, something she says is just plain unrealistic. “My hips are too big for Paris,” she grimaces, referring to her measurement of 36 to 37 inches.

And how does that make her feel? “Sad,” she admits. But her growing sense of self-acceptance helps. “If a designer does like me, they like me for me,” she says. “And I don’t want to have to conform and change the way my body looks just so I can do one job—or for the pleasure of somebody else.”

Photography by Porus Vimadalal. Styling by Lucia Perna. Creative direction by George Antonopoulos. Art direction by Danielle Campbell. Hair and makeup, Susana Hong for P1M.ca/Armani Beauty. Hair and makeup assistants, Arielle Park, Kaila Baker, Romy Zack and Sierra Elliott. Manicures, Leeanne Colley for P1M.ca/Tips Nail Bar. Fashion assistant, Pouyan Reisdanaee. Photography assistants, Arash Jahromi and Saishi Xu. Dress, $3,610, Moschino at The Room at Hudson’s Bay. Earrings, $3,810, and bottom necklace, $3,980, Ambush at Archives Boutique. Top necklace, $160, Jenny Bird. Middle necklace, $130, Cuchara. Rings, from $65, Biko.
Get the best of FASHION in your inbox Thanks for signing up!
The latest fashion, beauty and celeb news delivered right to your email #FASHIONforall Now, check your inbox to complete your subscription
We won’t ever use your email address for anything else
Want even more FASHION? Follow us on social media.