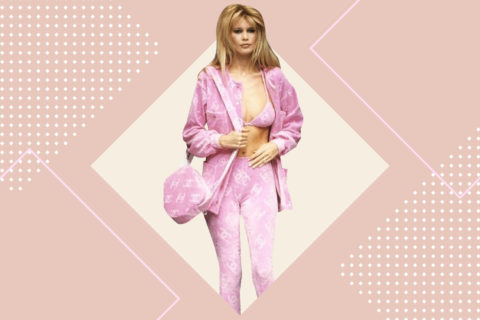 A Love Letter to Leggings: Our Fashion News Director Shares Her Thoughts

They’ve enjoyed a long stretch in popularity throughout history.

Over the years, I’ve had a love-hate relationship with leggings. Currently in a loved-up state, I recall the days when I’d think “NOT PANTS” when a person passed by me wearing them with a long sweater. But my mood has mellowed over time, and I’m presently at a point where I can appreciate them for both their look (fun!) and feel (homey).

As a child in the late ‘80s, you can imagine that my formative pop culture years were brimming with Lycra-clad icons from Kylie Minogue to Claudia Schiffer. But honey, Claudia’s were Chanel; my distaste towards them as acceptable out-of-house wear stemmed from the growing hold of athleisure and normcore. As a maximalist, I wondered, where was the pizzazz? Sure, being comfortable is awesome but must it be boring?

Thanks to a surge in brands taking legging design to artful heights, it’s almost a disservice to see them as merely part of your comfy clothing repertoire these days; after all, they’ve been in style for centuries. They were worn during the Renaissance period, and Indigenous communities have historically worn a type of leggings under other layers of dress.

The leggings we now know and love are part of a lineage since the introduction of Lycra in the late 1950s; the moment came right when women’s trousers were slimming in silhouette after the popularity of the outsized pant started to wane post-WWII.

But the decade that perhaps most catapulted these calve-clingers into the fashion lexicon was the ‘70s, where people clad in leggings revelled in their freedom of movement at Studio 54. Partiers like Pat Cleveland and Olivia Newton-John were legging lovers, too.

Once the ‘80s took over and getting physical was top of mind, leggings went from fashionable to functional, and the idea of performance-wear took precedence over simple aesthetics. And though leggings became even more ubiquitous during this decade, I argue this is where they lost a bit of their mojo and became more synonymous with stretches than style.

“I’ve actually been more of a tomboy in my style and only wore leggings when I was working out or training,” says Dawn Laing, the Toronto-based chief operations officer of Nuvango, an artful apparel company that sells the eclectic leggings I’ve come to prefer (I own a few pairs and wear them regularly during fashion week). “It wasn’t until I moved to Toronto and was exposed to so many options for leggings and prints that I started to lean into the comfort of leggings.”

Nuvango’s array of leggings boast the work of artists including HateCopy, Julie Hawkins, Callen Schaub, Lori Mirabelli and Warren Mack. All eye-catching, and all meant to be worn in the spirit of conspicuous comfort. “When we decided to launch a fashion x lifestyle brand, we wanted to launch with staple items that could stand alongside our artist-designed prints, which were loud and colourful,” says Laing. “Leggings ended up in that ‘basics’ collection.” I’d beg to differ that these jazzy pieces are anything but basic, and will certainly make you smile as you sport them at home (and eventually beyond close quarters).

Here are some bold leggings to add bravado to your closet. *NOTE: Nuvango and other brands/retailers are adopting new and different business practices during the COVID-19 crisis and mandatory business closures. If you’re unable to buy a piece you like now, bookmark it to purchase a pair later!