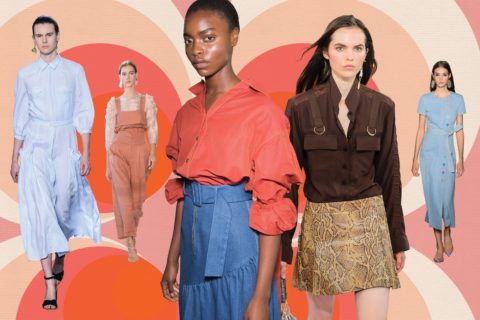 Is Our Obsession With Nostalgic Fashion Trends a Coping Mechanism?

"In it, I’ll be young, at the start of something new and exciting, and I’ll be the person I might have been. It will take me back to a time when I only looked ahead."

I grew up watching Three’s Company and cultivating the conviction that being a grown-up meant living with a couple of good-looking roommates somewhere near a beach and getting embroiled in misunderstandings involving double entendres and a swinging kitchen door. But mostly it meant that I would grow up to wear the hell out of ’70s-style midi-length skirts like Suzanne Somers’s Chrissy Snow. If Chrissy was my style hero, it wasn’t for the tight tops or bouncing flaxen ponytails. (Lord knows, blond and busty I am not.) But those swingy, waist-whittling A-line silhouettes, in shades of rust and sand and saddle brown, ideally partnered with espadrilles or stacked-heel boots, embroidered themselves in my imagination as the ultimate costume of young adulthood.

In fact, it occurs to me now that I’ve spent most of my life wanting to dress like (be?) a character in a ’70s sitcom. The Mary Tyler Moore Show’s Mary Richards instilled in me the fantasy that all that stood between me and competent, independent, self-possessed womanhood was a pair of dramatically-high-waisted wide-legged trousers. (I’m particularly weak to their summer sister, wide-legged button-front sailor pants. I’m sorry to add that I now claim more pairs of sailor pants than Captain High Liner, but it appears that I’m still waiting for the “competent” part to kick in. The possession of high-waisted trousers, it turns out, does not result in sexy self-possession.)

I now claim more pairs of sailor pants than Captain High Liner, but it appears that I’m still waiting for the “competent” part to kick in. The possession of high-waisted trousers, it turns out, does not result in sexy self-possession.

For all of this longing for a bygone time and its superior outfits, I can also blame my mother. She is French and therefore unusually brilliant at longing. For her, nostalgia, along with its passel of écharpe-wearing, Gitanes-puffing rela­tives—ennui, melancholy, malaise—is a cultural sport. (It’s also, come to think of it, the only sport at which I excel.)

But whatever the reason for this sartorial pining—maybe it’s because images of these outfits are so well parcelled with my childhood or because they dressed characters at the start of their new careers and lives—these clothes seem to me to be the wardrobe of beret-tossing hope and freedom. If I’m still weak in the face of a D-ring belt and a calf-grazing hemline, it’s because these clothes, to me, evoke a fantasy of fresh adulthood: the sitcom version—one not yet buttoned to commitments and uncreased by disillusionment.

All of this might explain why, when I was about 23, I bought an A-line dark denim midi-skirt—a Chrissy Snow classic as far as I was concerned—and proceeded to spend the better part of my 20s wearing it. If a decade can be defined by a piece of clothing, this skirt was the uniform of my 20s. Here’s how we met: I was in New York for a weekend, visiting a friend, when I popped into Agnès B.—a move that felt, at the time, like sashaying into Céline—and fell in destabilizing love. I still remember the skirt’s price tag ($145 U.S.) because I spent the rest of the weekend ration­alizing why it was entirely worth this (then-reckless-and-financially-ruinous) sum. I was just about to start my first real job (as a junior editor at a magazine), and the skirt—simple but with just enough working-girl pluck—would be my armour for my professional debut. I bought it.

I quit that job a few years later, but I remained deeply committed to the skirt. Then, sometime after I turned 30—I don’t know when or how—I lost it. I moved so many times from apartment to apartment (none of them near a beach, by the way), I don’t know what became of it. Sort of like a college boyfriend, it was so central in my life for so many years until one day it wasn’t. Although it disappeared over 10 years ago now, I find myself wondering about it, longing for it, sometimes even popping into Agnès B. thinking it will be there. (It never is.)

I have the wide-legged trousers but not the newsroom and I’m-gonna-make-it-after-all life to wear them in.

I have now worked as a freelance writer for 15 years and never quite became the careerist I thought I’d grow up to be. (I have the wide-legged trousers but not the newsroom and I’m-gonna-make-it-after-all life to wear them in.) I now spend more time in playgrounds and in pyjamas than I do, say, trading witticisms and tossing berets on my way up the professional ladder. I’m all for the present…I know you can’t live in the past, fair enough, but you can try.

In Paul Simon’s ’70s “Slip Slidin’ Away,” he sings that “a bad day’s when I lie in bed / and think of things that might have been.” On a recent bad day, as I online-shopped for the person I might have been, I came across the dreamiest dress version of that long-lost skirt, courtesy of Los Angeles-based brand Co, which is helmed by married couple Stephanie Danan and Justin Kern. It was divine in dark-rinse Japanese denim and accoutred with patch pockets and a full A-line midi-skirt.

“The ’70s is a place of nostalgia for me, too—it’s the time I remember my mother at her most glamorous,” Danan, who is from Montreal, tells me. “My mom was a designer in the ’70s and ’80s. She sold her line at Holt Renfrew and had a shop-in-shop at Ogilvy, and every Saturday I would follow her around for hours on end from vintage store to vintage store on St-Denis Street. And so began my own relationship with nostalgia and looking at clothes from a more historical perspective.” Danan and Kern founded the brand in 2011 after years of working in the film industry. Their signature silhouettes are hot sellers on Net-a-Porter and Goop, and they count Gwyneth Paltrow, Maggie Gyllenhaal and Jessica Seinfeld as fans.

When I meet Danan and Kern at their office in downtown L.A., I confess my ’70s sitcom habit and my current infatuation with that denim dress. “We tend to reference the ’40s more in our clothes,” Kern offers summarily. “That dress definitely has a ’40s vibe, but you can also imagine it with a pair of ’70s boots,” adds Danan. I prefer to imagine myself in it. In it, I’ll be young, at the start of something new and exciting, and I’ll be the person I might have been. It will take me back to a time when I only looked ahead. Danan kindly suggests that I try it on.

In it, I’ll be young, at the start of something new and exciting, and I’ll be the person I might have been. It will take me back to a time when I only looked ahead.

But the dress looked so much better on me in my head. Maybe because what I want is not the skirt or the dress but the time of life it belonged to. It turns out you can’t find the past—not even at full price on Net-a-Porter. 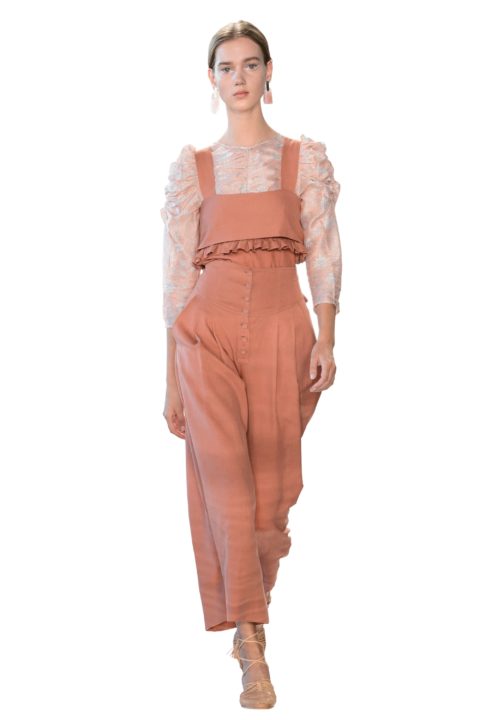 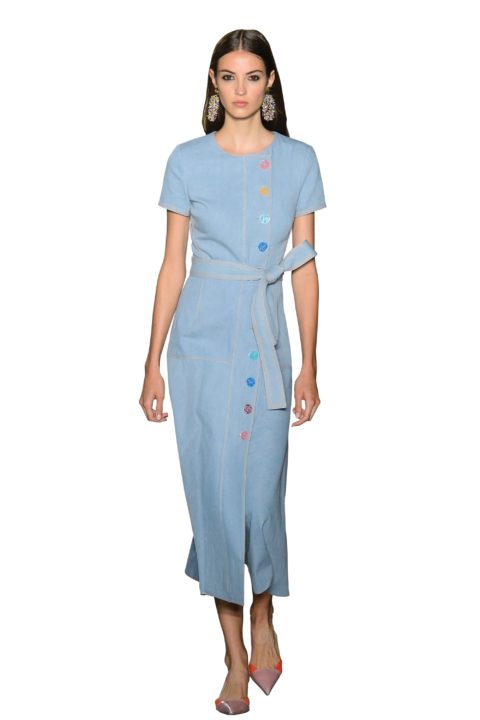 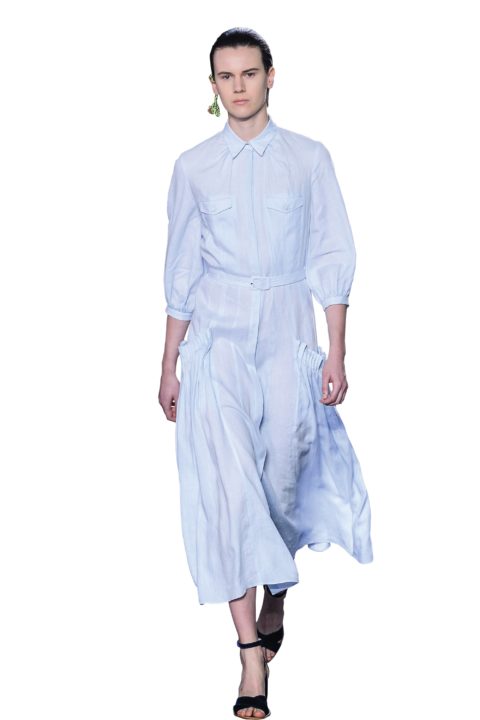