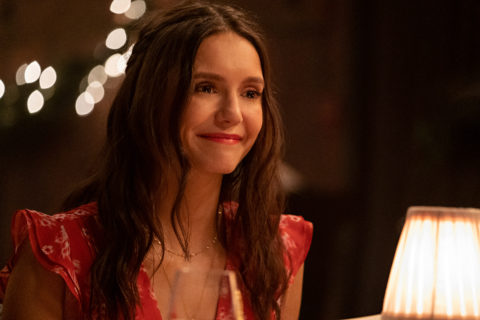 Nina Dobrev explores the ugly side of dating apps in her new romcom.

Let’s stop with the dating app thirst traps. This is not just me talking — take it from Nina Dobrev, who often finds herself working behind the scenes on her friends’ profiles.

During our video call, the Canadian actor and former FASHION cover star shares that she’s never made an online dating account for herself, but she’s drafted messages and curated photo selections for many of her pals. “We have too many shirtless selfies, like, we’ve got to narrow this down,” is a common critique she gives to her guy friends while examining their profiles. “No girl really cares that much.” (Thank you, Nina, for doing the Lord’s work.)

Built on the foundation of judging someone by their appearance, it’s no secret that dating apps can make it hard to form genuine connections. This is the premise of Dobrev’s latest film, Love Hard. The Netflix original, released on November 5, is a classic Christmas romcom with a modern twist. It follows Dobrev as Natalie Bauer, an LA-based journalist who has chronically bad luck with dating apps. After finally swiping right on the perfect guy, she flies out to his hometown to surprise him in person. But once she arrives, Natalie is faced with everyone’s worst online dating nightmare: she’s been catfished. The guy she thought she was meeting, Tag (Never Have I Ever‘s Darren Barnet), is actually the childhood friend of the person behind the profile, Josh (Jimmy O. Yang). The movie follows Natalie as she tries to find love while staying with her catfisher for the holidays. Fun!

“The whole theme in the movie that I loved and wanted to explore more is that perfection is something that we’re all seeking, but if we stopped for a second to look at ourselves and realize that we are flawed, then we would be more forgiving of other people’s flaws,” says Dobrev. “If you focus more on connection instead of the surface level things, then it’s not about finding the perfect person, it’s about finding the perfect fit for you.”

Set during Christmas time, and in a COVID-free world, Love Hard is a lighthearted, cozy watch. In true holiday spirit, there’s carolling, tree decorating and an ongoing debate as to whether or not Die Hard is a Christmas movie — Dobrev votes no, but we forgive her. The actor says her go-to holiday film is the untraditional Tim Burton flick The Nightmare Before Christmas (bold pick!). She’s also a big fan of The Grinch. “I think I just like really flawed characters that go through journeys, learn lessons and become better people,” she says.

Love Hard taps into how the looks-based model of online dating can feel like a popularity contest. At the same time, it leaves viewers with a question of ethics, by casting a sympathetic light on catfishing. Josh, the catfisher in question, is a sweet, understated guy who’s been passed over by the people in his life. His backstory is worth sympathizing with, but that doesn’t negate how insidious online deception can be. It begs the question: Is catfishing a forgivable crime? Dobrev says it depends.

“Starting on a foundation of lies is not a good way to start any relationship,” she explains. “But obviously, you understand Josh’s plight, as he goes on and you learn more about him as to why it happened. So it’s hard to generalize. It’s not black or white.”

In Love Hard, we see Nina Dobrev as a career-oriented professional. It’s a definitive switch-up from her most well-known role in the supernatural teenage drama The Vampire Diaries, which is now experiencing a cultural revival thanks to TikTok. Years after the show’s end, fans are recreating the outfits of TVD’s protagonist, Dobrev’s Elena Gilbert. Elena’s outfits stayed consistent despite the chaos around her, reliably sporting low-rise jeans, long fitted t-shirts and converse. Simple and unspecial as it was, the 2010s style sparks a sense of nostalgia among its fans, who dubbed the fashion trend “Elena Core.”

“I had no idea. That’s really flattering and cool,” says Dobrev in reaction to the trend. Looking back, she didn’t realize her character’s unassuming fashion sense would later reckon such a cult following. “I felt good in the clothes I was wearing because I did have a say in her wardrobe. But I don’t know that I would have considered [her a] style icon at the time, because it was pretty simple.” With two (very attractive) vampire brothers constantly fighting over her, love came almost too easy to Elena Gilbert. But Love Hard’s Natalie Bauer, on the other hand, has no such luck. Dobrev says it’s because her expectations are set too high. “She wasn’t perfect, but she was expecting perfection.”

In truth, we’re all a little dishonest when it comes to dating, even if it’s not intentional. “You’re always putting out the real-life Instagram-curated version of yourself — that’s why they call it a ‘honeymoon phase,’ because you’re sitting up a little bit straighter and you’re laughing a little harder at the jokes, ” says Dobrev. “The goal is to meet someone in the most unassuming environment when you are just who you are, and then your partner [falls] in love with that version of you first. That’s the ideal situation, but dating apps make that really hard nowadays.”

What’s Dobrev’s advice for online dating? Stop trying so hard, essentially. “Make it real, instead of a curated Instagram experience,” she says, adding that people should incorporate their personalities into their profiles. “I don’t think it should be all professional photos, I don’t think it should be all selfies, I think there needs to be a mix. And, yeah, we do want to see what you’re working with below the neck too,” she laughs. “It doesn’t have to be naked — I just mean seeing a general figure is nice.”

Most importantly, be you. “At one point or another, you are going to meet these people in person, and they are going to get to know that side of you,” says Dobrev. “So why waste your time texting and calling and then delaying the inevitable if you’re putting out something that’s false?”