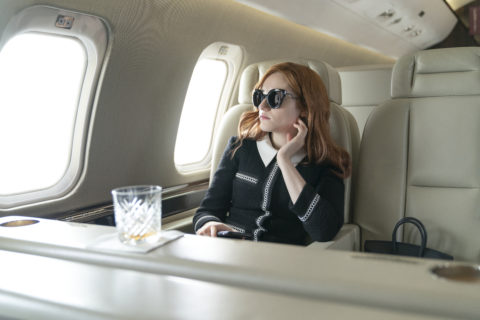 Plus, the series star dishes on meeting the real Anna Sorokin in prison.

Shonda Rhimes’ new Netflix series Inventing Anna is every bit as enticing, entertaining and binge-worthy as it sounds. Based on Jessica Pressler’s viral 2018 New York Magazine article, “How Anna Delvey Tricked New York’s Party People,” the series follows Anna Sorokin, the socialite who assumed the last name Delvey and managed to swindle Manhattan’s elite as well as scam banks, restaurants and hotels out of hundreds of thousands of dollars in the span of 10 months, convincing everyone she was a German heiress with a $67 million trust fund.

Following her trial, Delvey was sentenced to four to 12 years in prison. Biting into the role with flare and panache is two-time Emmy winner Julia Garner, who is known for her spectacular performance as Ruth on Ozark.

Garner, 28, slips into the character with efficacy and delivers a unique Russian accent and an impersonation that will stay with you long after you binge-watch the series. There’s a certain charm about Garner’s take on Anna, and while her performance is a testament to her incredible range as an actress, the fashion is what she calls “the icing on the cake.” Delvey grew up reading fashion magazines, and in Inventing Anna we see her expensive taste manifest in shopping trips to Bergdorf Goodman and a designer-filled wardrobe.

We sat down with Garner ahead of the show’s release today (February 11) to discuss bringing the role to life, visiting the real Anna Sorokin in prison and her favourite fashion moments in Inventing Anna.

As I was watching the series, I couldn’t tell whether Anna’s a scam artist or if she’s really a genius. She was just so good at convincing everyone. Who do you think Anna was when you were playing her – was she really a genius or just really good at selling it?

I think Anna’s trying to figure out who she is as well. I don’t think she was ever thinking that she was scamming or faking it. She just had an idea and she believed it and she wanted other people to believe in her.

I feel like there’s a bit of Anna in all of us – an outsider trying to make it, finding your identity. Towards the end we sympathize and understand where she’s coming from. How much of yourself did you see in Anna?

Anna and I are very different. I had to completely remove myself in order to become Anna Delvey. The only thing that I can say that we have in common, other than being young women, is that we are dreamers. As corny as that sounds, I feel like Anna is a big dreamer. I’m always attracted to characters that have a lot of hope. Because if you have hope, or you have a lot of dreams, you’re playing a character that has big dreams, the intention of everything is going to be bigger, in a way.

You visited her in prison. What surprised you the most when you met the real Anna Delvey in prison vs the person on the page?

I [didn’t have] any expectation of what she was, how she was going to be. I wasn’t expecting her to give any sort of information because she’s a very private person. So, what I really wanted to see was her energy, her aura, how she was. I just wanted to get her spirit, in a way, and the thing that I was taken aback by, that I wasn’t expecting, was how bubbly she was and how she was extremely likable. But it was more than just likeable. It was like she went from dark to light to light to dark in a matter of seconds. And it made her very complex.

She’s extremely charming. That’s really what it is. I wanted to take that energy that she had and put it into the show. Because whether she’s doing something bad or good, you’re still going to want to watch her.

Fashion is such a big component of Inventing Anna. How much fun did you have using the outfits and accessories as a tool to sort of convey how she’s feeling?

I feel like wardrobe is so important for an actor. I mean, it’s not going to make the character necessarily, but it definitely brings a character to a whole.

To me, fashion is such a form of escapism, in a way. And I think for Anna, she was always gravitating towards fashion…She was that little girl who used to read fashion magazines because it was a form of escapism. I think it gave her comfort in a way. I think that’s why it was important because Anna just seems like she’s always uncomfortable in her own skin. It’s not just about the clothes. It’s deeper than that.

How would you define her sense of fashion?

It was very, very, very elegant and fancy. I would describe Anna style as all sorts of different styles. I mean, she’s constantly reinventing herself. I think she’s still trying to figure out what her style is…When I felt the most Anna was I was wearing that baby doll Alaïa dress, with the Celine glasses. That is a very Anna Delvey look. That really captures her in a way. But I don’t know, she could come out and dress completely different because she wants to reinvent herself from the show. She is always reinventing herself. So it’s not like she has one specific style.

How different is it from your own style? How would you describe your sense of style?

Anna likes classic things…I always like things that have a little bit of an edge…Everything that I’m always attracted to has to have some sort of teeth to it. In a way, it comes down to my parts, playing these interesting women.

Did you get to keep an outfit from the show?

I did. I got to keep a coat [the Mackage wrap coat]. I mean, there was a lot of things that I couldn’t keep because of the archives, obviously, understandably… But I got to keep my fake teeth…I mean, why would they want that back? Anna Delvey’s fake teeth, to me, I’m like, that’s really interesting.