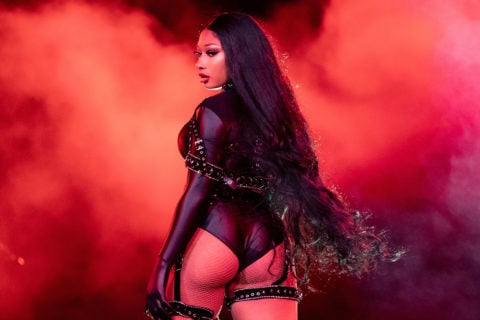 #BlackTikTokStrike was started by Black creators whose original dances have gone viral on TikTok without credit — and it's the reason you're not seeing choreographed dances to Megan Thee Stallion’s “Thot Shit” on the platform.

Since its inception, TikTok’s growth and popularity has been synonymous with the viral dance challenges found on the video-sharing app. But with each new trend comes a familiar cycle: Black TikTokers create dances, the dances are picked up by predominantly non-Black creators with large followings and go viral, and the creators of the trend don’t receive credit. And now, there is a Black TikTok strike in response.

In 2019, 15-year-old dancer Jalaiah Harmon (@jalaiahharmon) created the now-viral “Renegade” dance. The choreography was picked up by TikTok influencer Charli D’Amelio (@charlidamelio) who posted a video of herself performing it without crediting Harmon. D’Amelio is now one of the biggest homegrown stars on the app, and has even been called the “C.E.O.” of the dance. It took Harmon months to receive credit for the dance she created.

These are not isolated events, and Black TikTok creators are tired of seeing the erasure of their creativity on the app. Many Black creators have thus decided to boycott dance challenges as a response to their work being repeatedly taken without credit. Megan Thee Stallion’s newest song “Thot Shit” is backed with a catchy beat and filled with hype-up lyrics, making it prime viral TikTok dance material. But there are no dance challenges accompanying the song because of this boycott, dubbed #BlackTikTokStrike.

“#BlackTikTokStrike is yet another way for Black creators to make a stand and demand what they deserve,” creator Maya Cherry (@mayacherry10) tells FASHION. “Black creators are sick and tired of being the blueprint for so many trends, while white people get the praise, reward, and celebration they are unjustly due. The strike was a way for Black creators to remind everyone on this app just how influential they are, even though the app doesn’t want them to be acknowledged as such.”

“As a creator myself, it sucks that we Black creators are not getting the credit that we deserve,” says Kareem Wilder (@wildnkrazykid). “I feel that a lot of what Black creators have done over the years have been looked down on by society, until a famous white person does it… then it becomes ‘trendy.’” As social platforms like TikTok grow, so do tangible rewards like media attention, more followers, and career-defining opportunities for creators.

Cherry says uncredited trends on TikTok can be equated with unpaid labour. “A white creator with a huge following could rehearse a dance they saw on the [app], record it, post it and ‘forget’ the dance credit tag. A month or two later, this creator could receive all kinds of press, opportunities and jobs based on that video they posted,” she says. “Now the original Black creator is missing out on what could rightfully be theirs. All because their work, the blueprint of all of this new success, was not credited to them.”

Suavae “Strawberri” McCauley (@ayostrawberri), agrees. “Being a person who is on TikTok, I realize how much work goes into creating content,” she tells FASHION. “It is not easy to be consistent with uploading TikToks every day and coming up with new ideas on how it can be entertaining. It is a job. So if you are working a job [as] a creator, and someone is taking what you created and monetizing it and you’re not receiving anything for it, then it is truly unpaid labour.”

Because of the #BlackTikTokStrike, no viral dances have been created to Megan Thee Stallion’s song, pointing to just how influential Black creators are on the app. This lack of dance content has not gone unnoticed.

Cherry says this is not just a TikTok issue, but also a reminder of the appropriation of Black culture throughout history. She says she hopes the strike impacts TikTok’s algorithm, which has been called out in the past for silencing Black creators. “While I’m sure it’s reminding users all over the world of the impact Black people have on so many creative spaces, I think the most valuable acknowledgement and change would be from the app itself,” Cherry explains, adding that she wants to see Black creators amplified on the For You Page, TikTok’s never-ending scroll homepage.

As for those posting on TikTok, it’s necessary to credit the originators of the trends and dances you’re trying. “If you are posting a video that is not 100 percent original, give credit where credit is due. Mention the original creator in the beginning of your video, stitch their video instead of just creating your own, and for the love of God, tag the dance credit in the caption of your video, not in the comments,” says Cherry. “Do it intentionally and with authority.”