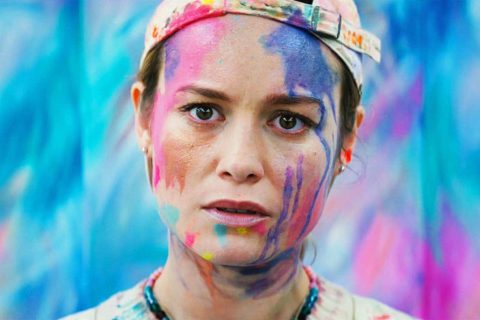 "I had made a lot of darker films that were about showing the dark corners of the world...but in all of that I was starting to lose this part of me."

I spent a full day of TIFF 2017 hanging out inside Brie Larson’s candy and glitter stocked Unicorn Store. In the morning, I watched the Oscar-winning actress answer audience questions at Nespresso’s Coffee with Creators event. In the afternoon, I watched her screen her directorial debut at the Ryerson theatre to a room of teary-eyed fans and skeptical critics. Post-premiere, I joined the cast at a nearby gay bar, where there was a donut wall, confetti blasters and a barista who would draw your face on a latte. In a festival full of moody period pieces and politically-charged dramas, Larson’s sugar-coated Unicorn Store offered a welcome toothache.

“It’s kind of aggressively positive,” Larson said of her film at the Coffee with Creators panel. “That was first a choice I made selfishly, because I had made a lot of darker films that were about showing the dark corners of the world, and that’s a really important task for filmmakers to take. We need that. When you’re in a theatre, you’re emphasizing, you’re watching, you’re becoming somebody else who has a different background than you. But in all of that I was starting to lose this part of me, that was like this inner child that was needing something, that was needing to not feel like the world was totally falling apart. What’s available to us at all times is childlike play and innocence. Even in the face of things that are scary, in the face of darkness…it’s still there.”

Unicorn Store follows the story of Kit, an art-school dropout who doesn’t want to grow up. She tried to: Kit puts on her mom’s skirt suit, takes on a temp job and forces herself to drink black coffee. Then, she gets an invite to the Unicorn Store and is offered her very own unicorn. Between the pop tarts, mystical creatures and overall rainbow-confetti aesthetic, Unicorn Store is saccharine sweet.

The reviews from its 2017 debut, however, were a little salty. Critics complained that the film was too fluffy and twee, noting its “fatal overdose of whimsical quirk.” Most of those reviews were from middle-age dudes. While, rationally, I can understand some of their complaints—the chemistry between Larson and Mamoudou Athieplayed, who plays a potential love interest for Kit, just isn’t there—I think most of these film critics are safely outside Unicorn Store‘s demo. For once, this isn’t a movie for them. “I’m going to make a film that’s extremely feminine and soft,” Larson said at the time of the premiere, “and I’m going to ask men to take a step forward and enter my space. I’ve entered your space for most of my life; you can step and enter my space this time.”

One man more than willing to enter Larson’s pink, frilly, feminine space was Samuel L. Jackson. In the post-premiere Q&A, Larson called the legendary actor—who plays the Unicorn Store salesman—her “Fairy Godmother,” citing how he will check in if she’s not Instagramming enough. Jackson has co-starred with Larson in both Kong: Skull Island and, most recently, Captain Marvel. When he found out about Larson’s first film he stormed into her dressing room to demand the part. When Samuel L. Jackson insists on a major role in your directorial debut, you know you’re someone special.

After its TIFF 2017 debut, the Unicorn Store went silent, with Larson’s blockbuster Marvel gig seemingly swallowing her independent project. Nearly two years later, however, the movie has found its perfect home: a streaming service where just about anything can find its audience. Netflix, it seems, is ready to embrace this glitter-bomb with open arms.

Like y'all have no idea how important this film is, and how important its role is going to be in shaping young women and even young men. I'm just, I'm in tears and I'm speechless but I also want to scream and shout about this till my voice gets hoarse. ALL THE EMOTIONS!

unicorn store made me laugh, cry and realise that it’s perfectly fine to be me. what a cute and uplifting movie i highly recommend pic.twitter.com/7yCVRjbQ6f

Watch the trailer for Unicorn Store, streaming now on Netflix: