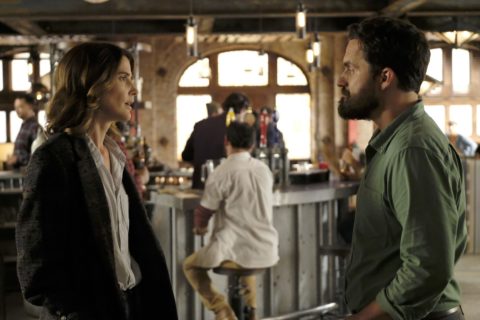 As the days get colder and the magnetic pull of our cozy couch gets stronger, here are the television series we’ll be tuning in to this fall.

Stumptown
Canada’s own Cobie Smulders stars in this series (adapted from a graphic novel by the same name) as Dex Parios, a brash Army veteran turned private investigator with a penchant for “whiskey, gambling, taking unnecessary risks and one-night stands.” New Girl’s Jake Johnson plays her best friend, and the show is set in Portland, Oregon.
The series premiered September 25 on ABC

Batwoman
After a whole lot of controversy surrounding the casting of a genderfluid actress (Ruby Rose) as the first out and proud lesbian superhero (Batwoman), the noise has finally died down enough for fans to get excited about the arrival of the new show. Set in a version of Gotham City where Batman has been missing for three years, Rose’s Kate Kane suits up and takes over.
The series premieres October 6 on The CW

Mixed-ish
Hit TV series Black-ish already has one spin-off, starring Yara Shahidi—Young-ish—and now it gets another. Focusing on the backstory of Rainbow Johnson, the mother in the original series played by Tracee Ellis-Ross, the show explores the experience of growing up in a mixed-race family in the 1980s, and is loosely based on the early life of series creator Kenya Barris’s wife Dr Renia Barris.
The series premiered September 24 on ABC

Nancy Drew
Everyone’s favourite strawberry-blonde detective is back. In this adaptation, Nancy Drew is working at a diner and planning to head off to college when she finds herself drawn into a supernatural murder mystery. Don’t try to figure out which one though; the series won’t be directly lifting any mysteries and storylines from the books. Vulture reports that its writers have said the show will be “inverted” and “reinvented” for modern times.
The series premieres October 9 on The CW

The Morning Show
Jennifer Aniston returns to TV with this new show co-starring Reese Witherspoon and Steve Carell. Aniston and Carell play newsreaders and co-hosts on one of the top morning news shows in the United States until Carell’s character is fired amid a scandal and Witherspoon’s character, a burgeoning and righteous journalist, enters the fray. Ambition, sexism, ageism, power plays and more are addressed as the series–which also stars Gugu Mbatha-Raw, Mark Duplass and Billy Crudup—unfolds.
The series premieres November 1 on Apple TV+

Bless the Harts
This animated series features some instantly recognizable voices: Kristen Wiig, Maya Rudolph, Kumail Nanjiani and Ike Barinholtz. The show follows a perpetually-broke family living in the South as they “stumble from one inevitably disastrous misadventure to the next,” and is based on the show creator’s life growing up in a small town in North Carolina.
The series premiered September 29 on Fox

Prodigal Son
This unsettling, complex crime drama revolves around an estranged father-and-son duo: Michael Sheen plays an infamous serial killer serving a life sentence in prison, whose son—a criminal profiler for the NYPD—reaches out to him after 10 years when a copycat killer operating with a similar protocol appears to be on the loose.
The series premiered on September 23 on Fox

Sunnyside
Kal Penn plays a disgraced former New York City councilman who, in his attempts to make some quick money, begins tutoring immigrants from various countries to help prepare them for their impending citizenship tests.
The series premiered September 26 on ABC

Carol’s Second Act
After nine years on Everybody Loves Raymond and another nine on The Middle, Patricia Heaton is back on our small screens as a retired teacher who decides to pursue her dreams of becoming a doctor, becoming the oldest member of the newest group of interns at Loyola Memorial Hospital. The show also stars Ashley Tisdale, Kyle MacLachlan and Canadian actors Sabrina Jalees and Jean-Luc Bilodeau.
The series premiered September 26 on Fox

Photography by Jessica Brooks/ABC via Getty Images
Get the best of FASHION in your inbox Thanks for signing up!
The latest fashion, beauty and celeb news delivered right to your email #FASHIONforall Now, check your inbox to complete your subscription
We won’t ever use your email address for anything else
Want even more FASHION? Follow us on social media.