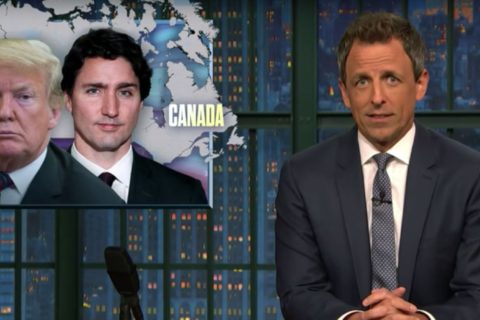 "How do you get in a fight with Canada? It's like holding a grudge against a Golden Retriever puppy."

This past weekend, after President Donald Trump left Quebec’s G7 summit for his meeting in Singapore with Kim Jong Un, he took to his favourite communication platform to voice his thoughts on Canadian Prime Minister Justin Trudeau.

PM Justin Trudeau of Canada acted so meek and mild during our @G7 meetings only to give a news conference after I left saying that, “US Tariffs were kind of insulting” and he “will not be pushed around.” Very dishonest & weak. Our Tariffs are in response to his of 270% on dairy!

Nice! A trade war! Doesn’t sound super neighbourly, does it? In response to President Trumps’s lack of diplomacy towards his country’s friendly upstairs friends, politicians, celebs and concerned citizens are speaking out, slamming Trump and thanking Canada on Twitter. (South of the border, Americans are using the hashtag #ThanksCanada to show their appreciation for Drake, poutine and other cool Canadian things.)

Oscar-winning actor Robert De Niro pitched in his own thoughts at recent Nobu groundbreaking ceremony in Toronto, apologizing for his president’s “idiotic behaviour,” calling it a “disgrace” and “disgusting.” His statement, in combination with a special “Fuck Trump” speech at Sunday’s Tony Awards, earned him his own Trump tweet thread. Print it and frame it De Niro, this is an honour reserved for the likes of Meryl Streep, Snoop Dogg and Hamilton the musical!

Robert De Niro, a very Low IQ individual, has received too many shots to the head by real boxers in movies. I watched him last night and truly believe he may be “punch-drunk.” I guess he doesn’t…

Late night comedians, of course, are contributing to the conversation with their own pro-Canada wisecracks. What clever jokes, exactly, are being made at our plaid loving country’s expense? Here are a few of our favourites…

“How do you get in a fight with Canada? It’s like holding a grudge against a Golden Retriever puppy.”

“Canada’s a peaceful nation run by a guy named Justin.”

The Late Show with Stephen Colbert

“Our relations have not been this bad with Canada since they stole the word bacon. Canadian bacon is just round ham you monsters. You ice holes.”

“They will not be pushed around. These are people whose idea of fun is strapping blades on their feet and punching eat other in the face on a frozen lake.”

“Canadian Hell: where Bud Light is on tap, they never play Gordon Lightfoot and you have to choose between Ryan Reynolds and Ryan Gosling.”

The Daily Show with Trevor Noah

Canada is “the Ned Flanders of countries.”

“It’s like going into the doctor for a routine checkup, and then coming out as a human centipede.”