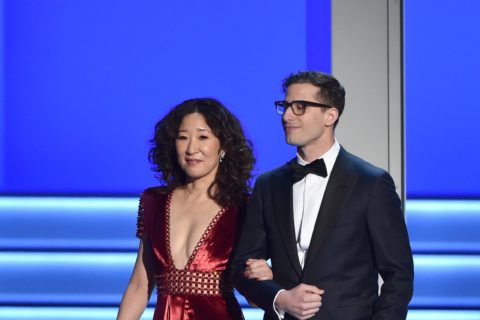 Is there a drearier month in the year than January? After the excessive eating, drinking and merry-making of December, the following month seems particularly dull. Weeks of festivities suddenly give way to virtuous New Year’s resolutions, intentions to work out and eat healthy, and of course, all sorts of proclamations about Dry January. In short, although it’s the start of a new year, it doesn’t always feel like there’s a lot to look forward to. Except there is. Read on for several things to get excited about this month.

1. Awards shows
One good thing about January is that it’s the official start of awards season, meaning we’ve got The Golden Globes, the Critics Choice Awards and the Screen Actors Guild Awards in quick succession. Red carpet dresses! Funny speeches! On-stage flubs and faux pas! Basically, there’s plenty of fun to be had. We’re particularly excited about the Globes, because they scored the hilariously charming Andy Samberg and Sandra Oh as hosts, as well as the SAGs, with sure-to-be-scathing host Megan Mullally.

2. The return of Brooklyn 99
Speaking of Andy Samberg, January is also the month that his feel-good cop comedy returns to our screens. This is a big deal because it almost didn’t happen. ICYMI, Fox News decided to cancel the show after five beloved seasons, and then—after a social media furor—NBC picked it up the very next day. Did Gina Linetti, human embodiment of the 100 emoji, have something to do with it? Either way, the show’s back on January 10 and we just know it’s going to be toit.

January is gonna be (coco)nuts. #Brooklyn99

3. Trevor Noah in Toronto
Trevor Noah, host of The Daily Show, is touring! The South African comedian will be in Toronto for four shows on January 11 and 12 as part of his ‘Loud and Clear’ tour. After sold out shows in Calgary, Edmonton and Montreal, the Just For Laughs comedy festival brings the acclaimed author and comedian to The 6ix. Starting the year with some laughs might be just what we all need.

4. Season 3 of True Detective
The first season of this HBO crime drama, back in 2014, was a television revelation, hooking what seemed like the entire world. Starring Matthew McConnaughey, Woody Harrelson and Michelle Monaghan, it was a critical and commercial success, garnering several Emmy nods. Season two, starring Colin Farrell, Rachel McAdams and Taylor Kitsch, not so much. HBO green-lit season three in 2017, and now here we are, just days away from its premiere. Starring Oscar-winner Mahershala Ali, the show is set in the Ozarks, over three different time periods. The first episode airs on HBO on January 13.

5. KISS’s farewell tour
Do you wanna rock n roll all night? Then you might not want to miss KISS’s farewell tour, which kicks off at Vancouver’s Rogers Arena on January 31. The ‘End of the Road’ world tour later makes stops in Ottawa, Toronto, Montreal and Toronto so keep tabs on those dates.

Only 50 days left until we hit the road for our final tour ever. What city will we see you in? Tickets & VIP available at kissonline.com #KISS #EndOfTheRoad

6. Carmen Sandiego
The noble criminal mastermind reappears January 18 on Netflix. In this reboot of the animated educational series, the elusive lady in red is voiced by Jane the Virgin’s Gina Rodriguez, while her chief accomplice Player is voiced by Stranger Things’s Finn Wolfhard. Described by Netflix as “a modern-day Robin Hood,” Sandiego’s story arc in this reboot will involve a look back at her past and how she became a globe-trotting super thief. (If animation’s not really your thing, keep an eye out for the live-action film about Sandiego, also starring Rodriguez, that is in the works.)

Our first look at #Netflix's ‘Carmen Sandiego’ reboot starring #GinaRodriguez is here! ?? Rodriguez will voice the woman underneath the hat for 20 episodes before also starring in a live-action Carmen Sandiego movie for the streaming service. Click the link in our bio to see more exclusive photos. ?: Netflix

A post shared by Entertainment Weekly (@entertainmentweekly) on Dec 10, 2018 at 2:07pm PST

7. Comedians of the World
Netflix’s Comedians of the World brings together stand-up comics from over a dozen regions—including India, Australia, the UK and the Middle East—for several hours worth of laughs. The Canadian lineup seems nearly double compared to that of other countries, and features Adib Alkhalidey, François Bellefeuille, Ivan Decker, Louis-José Houde, Katherine Levac, Dave Merheje, Deanne Smith and K. Trevor Wilson. The comedy special drops on Netflix on January 1.

Photography via Michael Buckner/Variety/REX/Shutterstock
Get the best of FASHION in your inbox Thanks for signing up!
The latest fashion, beauty and celeb news delivered right to your email #FASHIONforall Now, check your inbox to complete your subscription
We won’t ever use your email address for anything else
Want even more FASHION? Follow us on social media.