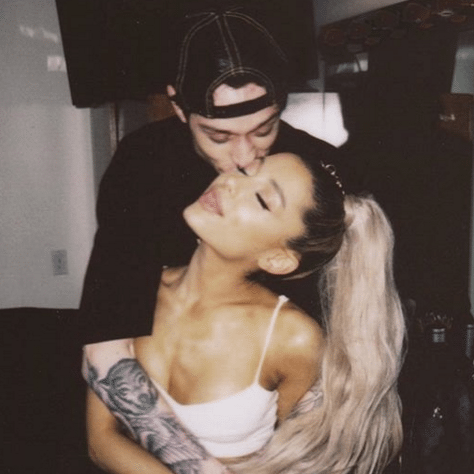 Ariana Grande and Pete Davidson became the most talked about celebrity couple of Summer 2018, melting hearts worldwide with their adorable social media love fest. On the heels of their respective public breakups, the pair entered into a whirlwind romance—and they brought all of us with them. Their PDA-filled relationship gave us multiple matching tattoos, cloud-shaped phone cases, and NSFW tweets (which have since been deleted) about Pete’s manhood. And then, it was all over.

From their initial meeting on Saturday Night Live to a surprise quickie engagement to their eventual split, here’s a play by play of everything that’s happened in this roller coaster ride of a relationship.

Grande and Davidson first meet on the set of Saturday Night Live, where she appeared as the host and musical guest, but both are in relationships with other people at the time; Grande is with longterm boyfriend Mac Miller and Davidson is dating Cazzie David.

Grande shocks fans when she releases an emotional and vulnerable statement confirming she’s ended her two year relationship with Miller. E News reports that the split was an amicable one with the two remaining close friends, but busy work schedules drove them apart.

According to Us Weekly, Grande and Davidson are spotted hanging out at an SNL after party at Zuma, with Grande spending the whole night with Davidson’s mom. She was later photographed leaving with a cloud shaped cell phone case that looked exactly like the one Davidson has.

Davidson reveals he’s split with his girlfriend on a Open Late with Peter Rosenberg appearance, calling her a “very talented girl” and explaining that “she’ll be great and she’ll be fine.” According to People when Davidson was asked about his relationship status, he responded, “We’re not together anymore.”

May 20, 2018: Pete supports Ariana at the Billboard Music Awards

After both confirming the end of their respective relationships, Davidson is caught on film by a fan supporting Grande at the Billboard Music Awards, her first awards show appearance since the horrific Manchester terror attack. A source tells People, “After Ariana’s performance, they were backstage and he had his arm around her, they seemed very lovey-dovey.” Fans later discover a cloud tattoo on Grande’s finger reminiscent of the one Davidson has.

News officially breaks that the couple is for sure an item, but according to People, the relationship is still extremely new, labelling it as “very casual”.

After Miller was arrested for a DUI, fans took to twitter to attack Grande, blaming their breakup for his reckless behaviour. In a tweet that has since gone viral, Grande sets the record straight, providing new and intimate details into their “toxic relationship”.

May 25, 2018: Pete defends relationship with Ariana

Following Grande’s epic clap back, Davidson posts a long note of his own to his Instagram story, discussing his mental health, after people criticize Grande for dating someone that has Borderline Personality Disorder.

Okay now they’re just doing it for our benefit. #CommentsByCelebs

It’s Grande’s turn to support Davidson as he performs at The Comedy Store in Los Angeles, sharing a snap to her Instagram story of him that she captions with heart eye emojis

May 30, 2018: The relationship is officially confirmed

The duo finally make it Instagram official, posting a homage pic to Harry Potter. Davidson’s caption is “the chamber of secrets has been opened”, possibly alluding that their relationship is outed. Grande commented, “U tryna Slytherin (I’m deleting my account now).”

We had a good night.

Davidson shows his love for Grande in a permanent way, getting two Grande themed tattoos; one referencing her Dangerous Woman bunny ears and the other showcasing the singer’s initials “AG”.  Davidson’s tattoo artist, London Reese, says “Pete loves him some Ariana” on his Instagram story.

Long before their engagement was officially confirmed, Grande was pictured backstage at Wango Tango wearing the $93,000 sparkler.

Reports begin to surface that the two are engaged, with Grande fanning the rumour mill with her Twitter activity. Us Weekly states, ” They are looking forward to a very long engagement together”, with People reporting, “It’s a recent engagement. They’re just two people who found love quickly and make each other happy all the time.”

Davidson confirms the engagement on IG, with a post that shows off Grande’s massive ring.

While talking to fans on twitter, Grande reveals new details about her upcoming album Sweetener, explaining she made a last minute addition to the album with the song named Pete.

Grande and Davidson get more matching tattoos, this time of H2GKMO (honest to God knock me out), posting a video to Instagram showing them off.

Tonight Pete Davidson confirms his engagement to Ariana Grande. Here's a sneak peek. Tune in to #FallonTonight for the full interview. pic.twitter.com/NjxmZ2njgR

Davidson appears on Jimmy Fallon, describing his engagement as “winning a contest.”

Just when you thought they couldn’t get any cuter, Davidson posts the sweetest birthday message for Grande, calling her “the most precious angel.”

Grande debuts a new foot tattoo “8418”, which was the badge number of Davidson’s late father who was a firefighter and passed away during the September 11 terrorist attacks in NYC.

At a stand-up show last fall—well before the couple linked up—Pete Davidson made a joke about the Manchester Arena bombing that killed 22 patrons at an Ariana Grande concert. Essentially, the joke was that the horrific incident lead Grande to realize how famous she was, because “Britney Spears didn’t have a terrorist attack at her concert.” (Poor taste, we know.)

With the joke resurfacing on the web, Ariana finally felt she needed to comment. In a since deleted tweet, she wrote: “this has been v tough & conflicting on my heart. he uses comedy to help ppl feel better ab how f-ed up things in this world are. we all deal w trauma differently. I of course didn’t find it funny. it was months ago & his intention wasn’t/ is never malicious but it was unfortunate.”

When Pete Davidson wiped his Instagram account Monday — deleting ALL traces of his beloved fiancé — the Internet started freaking out. Which, after a few short hours in the dark, prompted the comedian to return to the platform to clear up a few things.

“No there’s nothing wrong. No nothing happened. No there’s nothing cryptic about anything,” he explained on Instagram Stories. “I just don’t wanna be on Instagram anymore. Or on any social media platform. The internet is an evil place and it doesn’t make me feel good. Why should I spend any time on negative energy when my real life is fucking lit. The fact that I even have to say this proves my point. I love you all and I’m sure I’ll be back at some point.”

Davidson’s departure from social media seems to have rubbed off on Grande, who responded to a fan saying that she’s also taking a step back from Twitter and Instagram. “Just sometimes can’t help but bump into some negative shit that really can bum u out,” she wrote on Monday, “and it’s not worth it honestly.”

yeh ! i’m prolly gonna post on der for a little while & take a breather from twitter & ig for a little. just sometimes can’t help but bump into some negative shit that really can bum u out and it’s not worth it honestly. promised i’d always tell you. i love u sm ! be well & happy

Okay, so this timeline might be even shorter than we initially thought. When Pete Davidson was interviewed for GQ‘s September issue, he revealed: “The day I met her, I was like, ‘Hey, I’ll marry you tomorrow. She was calling my bluff. I sent her a picture [of engagement rings]. I was like, ‘Do you like any of these?’ She was like, ‘Those are my favourite ones,’ and I was like, ‘Sick.'” The ring he settled on? A 3-carat pear diamond ring — worth $93,000.

October 14, 2018: Pete and Ariana call off the engagement

Well, it seems another one of our young Hollywood relationship timelines has come to its end. A source has confirmed to TMZ that Ariana Grande and Pete Davidson have split after five months of dating, calling of their short engagement. “We’re told the two still have love for each other,” TMZ shared, “but things are over romantically.”

November 1, 2018: Pete jokes about his engagement on SNL

“No,” Rogers says shaking her head.

“0-for-three,” Davidson says to the camera.

Then, in what is perceived to be a subtweet at Davidson, Grande tweeted and deleted: “For somebody who claims to hate relevancy u sure love clinging to it huh.”

Ariana Grande just subtweeted Pete Davidson and then said “thank u, next.” pic.twitter.com/WLkNahvwnR