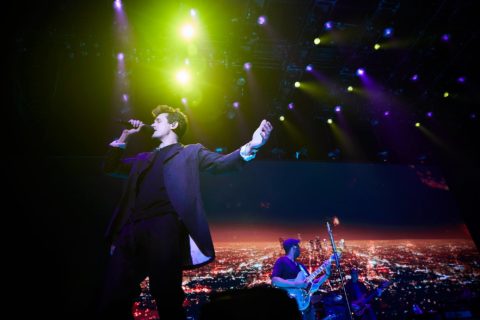 John Mayer had his audience swooning last night at Toronto’s Air Canada Centre. The musician, who’s currently on his Search For Everything World Tour, kicked off his show with his 2006 hit “Belief.”

But if you thought that Mayer was the only one who had the crowd spellbound, think again. To the pleasure of everyone (even my father), Shawn Mendes made a surprise appearance onstage during the set; The duo performed a mash-up of the Juno Award-winning musician’s “Mercy” and Mayer’s “In Your Atmosphere.”

The dynamite @shawnmendes joined me in Toronto tonight perform a "Mercy"/"In Your Atmosphere" mashup and it was over the top good. #thesearchforeverything #shawnmendes #bringingbacktheworddynamite

Nearly overshadowing the veteran musician, Mendes smirked his way off the stage. Mayer later informed the audience that the Pickering-born singer was attending the concert with friends and none of them knew he would be performing.

“When I asked Shawn to do this, he said that he wasn’t going to tell his friends he was coming on stage,” he said. “He just told them he was going to the bathroom. Now every time he goes to the bathroom they’ll wonder who he is going on stage with next. The boy who cried ‘wolf.'”

Later in the show, Mayer poked fun at his recent New York Times interview, in which he revealed that “Still Feel Like Your Man” off of The Search for Everything was about missing ex-girlfriend Katy Perry. “You can write a song because of something, but also for something,” he explained. “And this song is for the fans.”

The night closed out with fans swaying smartphones in the darkness as the heartthrob killed it on the piano while performing “You’re Going to Live Forever In Me.”

In case you missed the epic night, not to worry: John Mayer returns to Toronto on August 29th at Budweiser Gardens. We. Can’t. Wait.