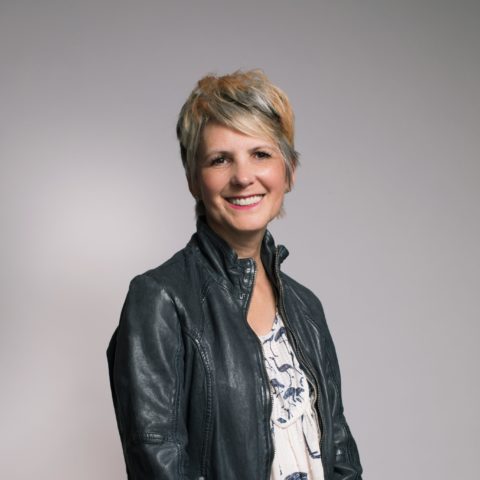 This International Women's Day, Canadian Shaan Pruden looks back at her 30-year career with Apple.

Shaan Pruden has worked at Apple for three decades. Since 1989, she has seen the company through all its greatest hits—the Mac, of course, but then the iPhone, the iPad, the Apple Watch, Apple TV and now Augmented Reality. “I think that’s why I’ve hung around so long,” laughs Pruden. “We keep reinventing ourselves.” 30 years ago, when Pruden first joined Apple’s Edmonton office, heading up support for Macs on campus, it was a different world. “We went through some dark days there in the early run before Steve came back,” she remembers. “And then after he came back it’s a remarkable journey that we’ve been on.” Pruden is now the company’s Senior Director of Developer Relations, with a team that works with developers in every category on the App Store.

On a day-to-day basis, that means talking constantly with different developers around the world to offer them support and guidance. “We’re sort of a product advisor, almost like a product manager if you will, except it’s not Apple products, it’s other people’s products (laughs) and we help them put their best foot forward on our platform.”

Suffice it to say, the past three decades have been a journey, one in which Pruden has seen not just technological leaps but also a shift in the environment and makeup of the tech industry. We caught up with Pruden on her recent visit to Toronto to chat about her 30-year career, the things she’s learned along the way, and why encouraging women to join the tech landscape is a big focus of her work at Apple.

A big part of your mission is to involve girls and women in the fields of science and tech. How did you end up in the field yourself?

I was always good at math and so I just thought ‘well I’ll do a degree in math because that’s what I really love.’ My mom was an accountant and my dad was always really good at math so it seemed like a natural thing. And then just before I made my decision about what university I was going to go to and what I was going to take, I thought ‘these computer things might go somewhere, maybe I should do that too.’ I mean, this was a long time ago. When I went to the University of Victoria the computer science department had just gotten set up and used to be in the math department so they were kind of co-located in the same building. It seemed like an easy adjacent degree so I did a double undergrad in math and computer science to kind of hedge my bets.

I think your instincts were right, I think it paid off.

It’s funny because I haven’t coded in years. But knowing how to code is such a key skill especially now because everything we touch in our lives, whether it’s your appliances at home or your car, has software in it. And a curious human being should know what it takes to actually build that. Not the details necessarily but just—what is software, and how does it work? When you learn the basics even, it’s just tremendous for helping you develop critical thinking skills, and when you’re working on coding projects together it’s great for learning how to collaborate and how to communicate with each other. I think it’s just very valuable for anything you’re going to do in your life, and everybody could benefit from those skills.

What are some of the ways to engage women and young girls with this world a little bit more?

I think we need to shine a light on role models for these girls because I think if you’ve only seen computers on TV or whatnot, you might think it’s not for you because the stereotype of a ‘computer person’ is a nerdy guy, when it’s really not. I see every kind of person doing this, from every walk of life, and when you can see that you can think to yourself ‘oh well that’s something that I could do’ and I think it gives you that confidence to try it. The five female developers FASHION just featured are going to shine a light on this—it’s tremendous. I bet you that there are girls out there who are going to read that article and go ‘I never thought about that. Maybe I could do that.’ Some of these girls—they’re not the coders themselves. Being part of a startup and doing an app doesn’t mean you have to necessarily code. You might be the business person who has the great idea about how to market it or you might be the designer making the videos that go online. It takes a real cross-section of people to make a great app.

Historically, if you look at tech companies, women have occupied a very small percentage of roles there. That still continues to be the case. Why do you think that is, even in 2019?

I actually see it very different from even 10 years ago. I think we’ve made tremendous strides and I think the reason is because software used to be the domain of a handful of companies. I don’t know if you remember, but the way you used to buy software was in a box at a store. There was no way you could come up with an idea for an app and create it and put in a shiny disc and sell it yourself. It just wasn’t going to happen. So the App Store really democratized software. Anybody with a great idea can write an app and put it up on the App Store and be in 150 countries all around the world overnight. That’s just amazing. I think that’s opened the doors and I see a ton more women in these startups than in the traditional software houses that we had before, which were pretty dominated by men. But even that’s changing. I work a lot with Adobe and Microsoft and there’s a lot of women that are involved in this now. So I think it will take time to get to an equilibrium where there’s half women and half men, which is why we’re investing in things like Everyone Can Code. Our retail stores are an amazing resource for us, where people can sign up for these classes and learn how to get started. There’s also something we’ve been doing with the Malala Foundation—that’s another effort we’ve made to try and reach out through her organization into regions where we might not have retail stores so that we can impact their lives as well.

Apple hosted its first all-female Entrepreneur Camp in January. Can you tell us a bit more about that?

I’m very excited about that. We just had our first cohort in January and we’re gearing up to have another one in April. It’s designed to support female-founded startups that also have female engineers in a senior role. Our first cohort was 12 companies from around the world, everything from single proprietors to more established companies that had apps on the Store and have a thriving business already. And the idea basically comes back to what makes a great app experience and how we can help them hone and perfect their app. They already had a good idea, what can we do to make the app even better? We have a two-week period with them on the Apple campus to sit side by side and roll up our sleeves, and help them update their app so that it can be the best it can be on all our platforms. It’s just been a tremendous experience. The women that came through that first cohort were so inspiring and I’m very excited to work with the next bunch of them in a couple of weeks.

Is it safe to assume that in the ’80s you were pretty much the only woman in the room? How have things changed since then?

Many, many times. Most of the time. It’s really inspiring to see the change. Great ideas can come from anywhere and I think we were limited in our thinking before because we had one voice in the room. I’ve seen it change dramatically over the last 30 years. Even over the last 10-15 years. The App Store has revolutionized the whole industry and changed who can make apps and get them in the hands of users. It’s created this amazing opportunity for people to express themselves. If you look at the developer community, they had an idea that they were passionate about, they looked at what was already available and went ‘well, there’s nothing good here for my people, so I’m going to go do it myself.’ And these are the people that have the gumption to either figure out how to code themselves or find somebody who can and partner with them, and actually pull this whole thing together. What these people have done is nothing short of remarkable. It takes a lot of passion and a lot of work and creativity to really get something off the ground and build an audience. If you’ve got a passion for something and you’ve got drive, there’s a way to make it happen. And that’s what all these people are doing which is so exciting and so inspiring.

Photography courtesy Apple
Get the best of FASHION in your inbox Thanks for signing up!
The latest fashion, beauty and celeb news delivered right to your email #FASHIONforall Now, check your inbox to complete your subscription
We won’t ever use your email address for anything else
Want even more FASHION? Follow us on social media.