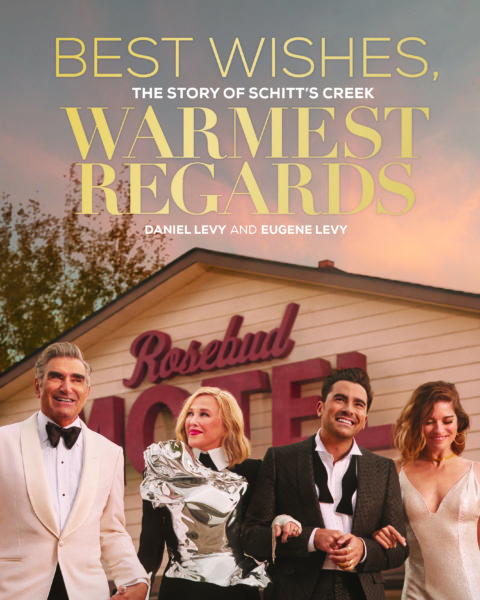 Dan and Eugene Levy Are Releasing a Schitt’s Creek Book

The award-winning Canadian television series Schitt’s Creek is getting a book from the show’s stars and co-creators Dan and Eugene Levy. It was announced on May 25 that Black Dog & Leventhal acquired the coffee table book, titled Best Wishes, Warmest Regards: The Story of Schitt’s Creek.

In case you haven’t watched yet (and if so, what are you waiting for?), Schitt’s Creek is a quirky comedy that follows a formerly affluent family who, after being bankrupted by a business manager, have no choice but to move to a small, run-down town that they once bought as a joke. The beloved show released its sixth and final season on CBC and streaming platforms last year, and the announcement of this book feels like the perfect parting gift for fans.

The keepsake book, which will be published in October 2021, is a celebration of the town, the characters, and the series as a whole. It will include character profiles from the cast of Johnny (Eugene Levy), Moira (Catherine O’Hara), David (Dan Levy), and Alexis (Annie Murphy), as well as the other town residents. The book will also share behind-the-scenes memories and highlight fan-favourite moments, from David’s first kiss with his future husband Patrick (Noah Reid), to Moira’s infamous endorsement of Herb Ertlinger Winery.

In an announcement of the book on Twitter, Dan Levy wrote, “Spent the better part of the last year and a half putting this book together. We really wanted it to feel like a thoughtful celebration of the time we had.”

Spent the better part of the last year and a half putting this book together. We really wanted it to feel like a thoughtful celebration of the time we had. I’m now a tired shell of myself but apparently you can pre-order it today which is fun/worth it! https://t.co/7L9IE9zDqP

After its sixth season, Schitt’s Creek broke records by becoming the first comedy or drama series to win all four acting categories and receive the most wins for a comedy series in its final season. The show won a total of nine Emmys last year — the most ever for a comedy in a single season. And although the series finale aired over a year ago, the show is still receiving praise — winning big at this year’s SAG Awards and Canadian Screen Awards.

Since the show wrapped, its stars have kept busy with different post-Schitt’s Creek projects. Along with their upcoming book, the Levy father-and-son duo have had their hands full. In 2019, Dan Levy signed a three-year deal with Disney’s ABC Studios to develop and produce scripted projects for the studio. Meanwhile, the older Levy will be voice acting in the animated project The Beast, Heroes of the Wildfire, and will be again working alongside Catherine O’Hara. The lauded actress will be voicing the lead role of Mayor Owl in The Beast, Heroes of the Wildfire. She is also set to appear in the animated film Extinct, alongside Adam DeVine, Rachel Bloom, Zazie Beetz, and Ken Jeong, which is set for release in 2021. Annie Murphy is venturing into dark comedy, and will be starring in Kevin Can F**k Himself, a 2021 series by AMC Studios. Murphy was also spotted in a Nintendo commercial earlier this year!

All good things must come to an end, but we know Best Wishes, Warmest Regards will provide a much-needed escape back into the world of Schitt’s Creek with our favourite characters. The book is available for pre order now through the publisher’s website.