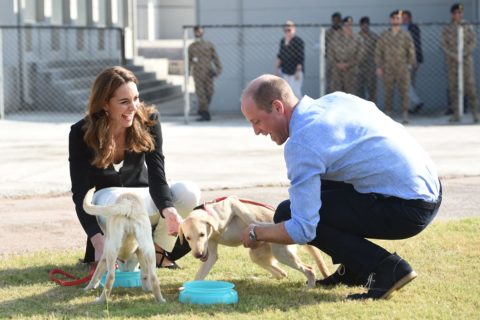 Puppies! Fashion! See What Went Down on the Final Day of the Royal Tour of Pakistan

After a flight scare, the Duke and Duchess of Cambridge shook off the drama by playing with puppies

The royal tour of Pakistan is officially over. After spending five days in the country with a packed schedule, the Duke and Duchess of Cambridge bid farewell to the Eastern nation today. But not before fitting one last (very cute) event in.

Kate and William visited the Army Canine Centre and played with two labradors called Salto and Sky. The royals led the puppies through an agility course and were shown how the dogs are trained to locate explosive devices. The program is held in tandem with the UK Defense Animal Training Centre which helps the Pakistan Counter Improvised Explosive Device program to “take on the ongoing security challenges of the region,” according to People.

William told press after the visit, “The whole week we have been hearing about security in Pakistan and it’s really brought home to Catherine and I the importance of the relationship between the UK and Pakistan. We are involved with the Pakistanis for a very good reason, it will actually keep people safe back in the UK.”

For the final stop, Kate wore a black coat by Beaulah, paired with a white tunic and trousers and black flats from Russell & Bromley. The stop came after the pair’s plane was forced to return to Lahore after departing last night following huge electrical storms. They were due to land in Islamabad last night, but were delayed by 18 hours forcing them to cancel two earlier engagements.

When it came time for the pair to depart, Kate changed into a detailed black and white Élan kurta which she wore over white Gul Ahmed trousers and accessorized with nude  J.Crew pumps, a Maheen Khan scarf and a black Smythson handbag.

This trip was particularly significant for a number of reasons. First, the Duke and Duchess visited many of the same locations the late Princess Diana did during her tour of the country in 1991, and it also marked the first time royals had visited the country since 2006.