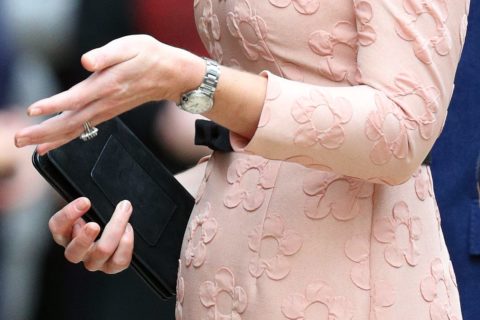 Did Prince William Just Reveal the Sex of the New Royal Baby?

With royal baby number three expected to arrive any day now, it shouldn’t too long before we get some official baby news from Kensington Palace. The gender and name of the Duke and Duchess of Cambridge’s third child will be kept under wraps until the birth itself — but, of course, that won’t stop bookies from making highly educated bets on the details. While we wait, here’s everything we know (and everything we think we know) about Kate and Prince William’s new baby.

According to People, Prince William attended a very British soccer match between Aston Villa and Cardiff City on Tuesday. While celebrating Aston Villa’s win, Will got caught up in the excitement and let a very suspicious, very baby-related statement slip. Speaking about player Jack Grealish, who scored the game-winning goal, the prince was heard saying: “I’m going to insist the baby is called Jack.” Which, OMG, definitely means Kate is giving birth to a boy. Then he paused and added, “… or Jackie.”

What will they name Royal Baby #3?

Back in January, the odds favoured Alice for a baby girl and Albert for a baby boy. But the bookies have swung towards another top choice: Mary now is favoured as the top pick for a girl’s name, and Albert and Arthur are tied for the top boys’ names. With the gender of the baby pretty much publicly decided upon, people are now so convinced they know what George and Charlotte’s new sibling will be Mary, that the bookies have suspended bets.

When is Royal Baby #3 coming?

Any day now, royal watchers will start camping out at the Lindo Wing. In February, Kensington Palace confirmed via Twitter that Kate Middleton and Prince William are “delighted to confirm they are expecting a baby in April 2018.” *Sigh*, there’s nothing like a precious little Princess or Prince to mark the start of spring.

Will Royal Baby #3 ever rule Britain?

Whether royal baby number three is a prince or princess, he/she will fall behind Prince Charles, Prince William, Prince George and Princess Charlotte. Sorry Prince Harry, but that means you just got bumped to sixth place.

Where will Royal Baby #3 be born?

Or will he/she? There have been rumours circulating that Kate is thinking about a home birth for her third baby. Kate gave birth to Princess Charlotte and Prince George in the private wing of the West London hospital, and Princess Diana gave birth to Prince William and Prince Harry in Lindo Wing as well. But this hasn’t always been the case with royal births: Queen Elizabeth II was born at a home belonging to her mother’s parents in London’s Mayfair and Prince Charles was born at Buckingham Palace.