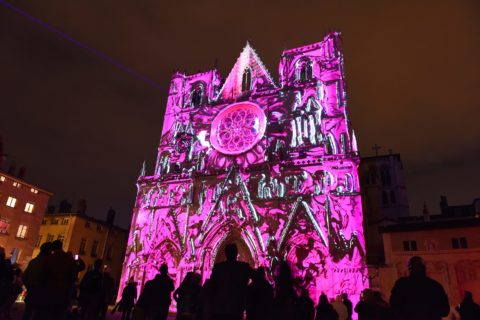 Relive the festival through our GIF recap.

Lyon is a city at the intersection of history and innovation. Take for instance the Grand Hôtel-Dieu, a hospital dating back to the 12th century, which was recently converted into a luxury shopping centre featuring restaurants and an InterContinental hotel. If you make your way through Lyon’s traboules (or secret passageways for the uninitiated), you’ll find modern apartment complexes formed from 15th century Italian-style renaissance houses. So it should come as no surprise that the Festival of Lights (Fête des Lumières), which began as Lyon’s candlelight tribute to the Virgin Mary back in 1852 became a four-night spectacle of light that draws in approximately 1.8 million visitors from around the world.

During these four nights, the French city transforms into a treasure hunt of lighting installations. Hordes of people pour out onto its streets, with many ending up congregating in the outdoor patios that adorn Lyon’s cobblestone paths. Each evening is one of discovery and unity, as you weave your way through unfamiliar streets in search of the opulently lit historic sites, while discovering other gems along the way.

At the entrance to the Lumignons du Coeur installation (a tent formed of garlands of light), a woman was overheard saying, “It’s just a photographer’s dream isn’t it?” Indeed it was, and to take it one step further, we’ve put together a series of GIFs featuring some of the most spectacular installations, as well as a video montage to show you what the festival had to offer this year. Here are the highlights: 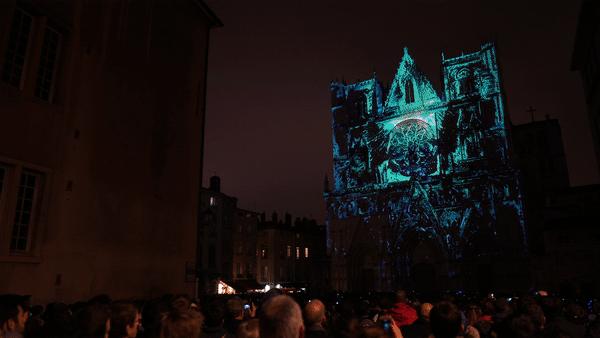 The Saint-Jean Cathedral, which sits in Lyon’s fifth district and took over three centuries to build, is one of the venues that garners the most attention during the festival. This year, creative studio Ocubo put together a projection show on the facade of the structure featuring flowing inks in water and morphing flowers. Using real capture methods and 3D printing techniques to replicate the cathedral’s architecture, the visuals interacted with the building’s features, bringing it to life in a new way. 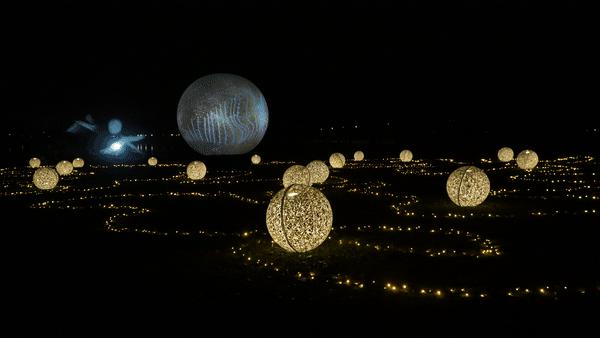 Upon stepping into Tête D’Or Park we were transported into another world—one of majestic spheres and fairy-tale-like birds that were suspended mid-air. As we explored the park there were strings of lights and orbs crawling across the lawns like luminous vines, and dark passageways speckled with light. Over the lake a projection played against a mist of water casting ephemeral images of birds and a dancer. The artist, Marie-Jeanne Gauthé, says the idea was to present a beautiful world that parallels our own, with the dancer acting as a messenger warning us of its precariousness. 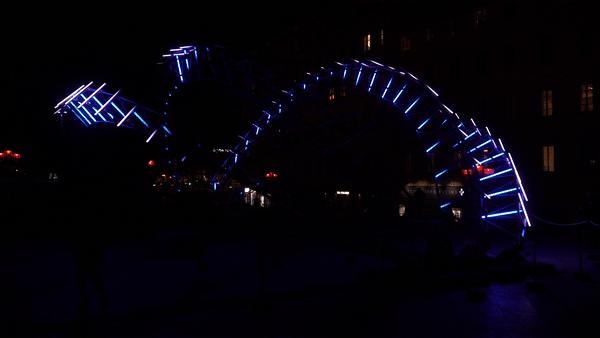 Hypnotic in its rhythmic sequencing of lights and ambient soundscape, Abyss was a transfixing piece that gave the impression of a breathing mechanical creature. Artist Nicolas Paolozzi took inspiration from bioluminescent animals to create an interactive piece that allowed visitors to trigger different light patterns.

You and the Night 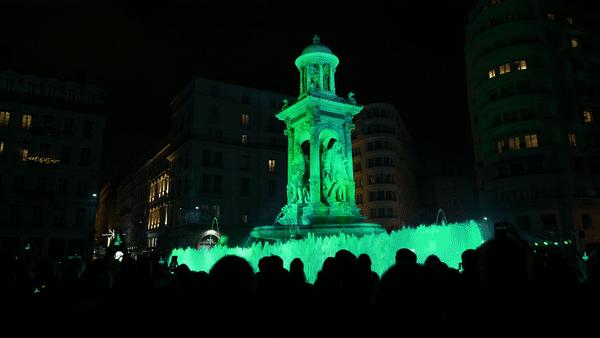 David Udovtsch’s piece, which took inspiration from the northern lights, started out as a simple starry illumination of the Jacobins Fountain, but turned into something way more elaborate. As the music grew louder, the water rose up in hues of green, purple and blue, dancing to an orchestral score that engulfed the entire square. Not pictured, the audible gasp from the audience when the fountain sprung to life.

A Small Square for Big Dreams 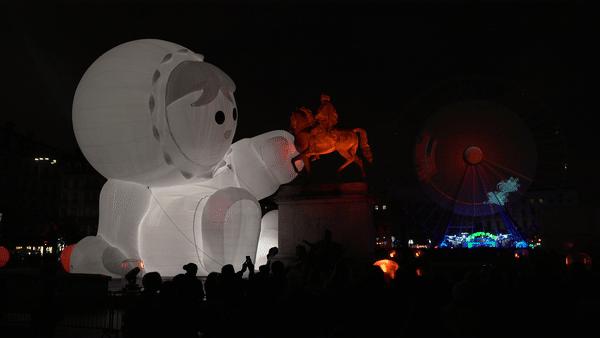 Back for another Festival of Lights were the cartoon Anookis, who, according to locals, are practically celebrities in Lyonnais culture. Playful at its heart, the piece featured the two giant inflatable characters (at 20 meters tall each!) discovering the city: One curiously poking at a statue of Louis XIV, the other leaning over a building and examining a bus. The crowd filtered around balls of light, which animated in response to a video playing on the Place Bellecour Square ferris wheel (and yes, the ferris wheel is still operational). 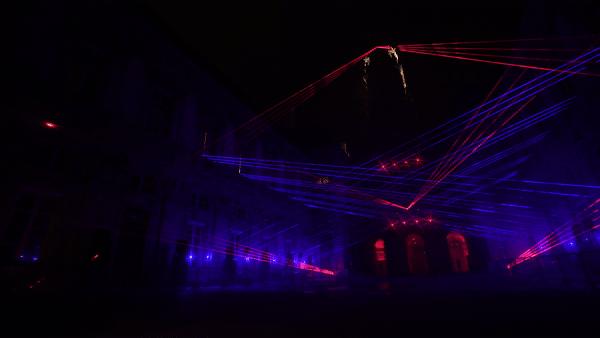 Set to a beautiful melancholic score, Tricolore consisted of a red, white and blue-coloured laser show that filled the courtyard of city hall—it was a rare opportunity for the public to visit this historic site. The building was bathed in a deep red light as visitors anxiously awaited the show to start. One by one the lasers began to build into a web of beams that moved and intersected delicately.

If you feel like you missed out this year, don’t worry: the annual festival will be back next December. For more on Lyon’s Festival of Lights, check out the video below.