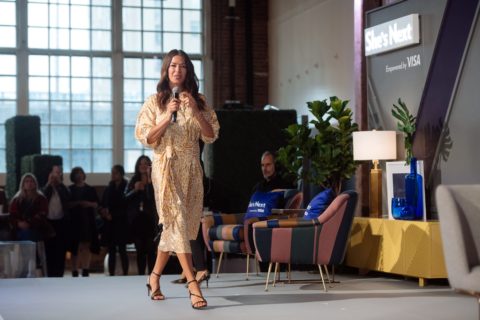 Rebecca Minkoff on Women in Business, Building a Global Network of Female Entrepreneurs and More

"I think there need to be more women in C-suite positions [in Canada] and there just needs to be more access to capital for female-founded companies."

New York-based designer Rebecca Minkoff touched down in Toronto earlier this week for her first event in the city under the banner of Female Founder Collective (FFC), an organization she founded to help support women-owned businesses. In partnership with VISA’s She’s Next program, the Collective co-hosted a day of workshops, panels and expert guidance for Toronto’s female entrepreneurs.

Speaking at the event were a slate of impressive women including Maria Locker of MOMpreneurs, a group founded to empower moms in business; Fatima Zaidi, founder of Quill, an online marketplace that connects podcasters to freelancers; Taran and Bunny Ghatrora, founders of Blume, a feminine hygiene subscription service; and Minkoff, who launched FFC in September of last year. (She also hosts a weekly podcast called Superwomen, in which she sits down with some of the most successful women in the world to learn more about how they do it all.)

“What really drove the decision to launch the Collective was the lack of representation for female-founded companies being seen as thought leaders or examples of entrepreneurship,” Minkoff told FASHION at the event. As someone who launched her own label at the age of 25 (in 2005), Minkoff has seen first-hand the struggles female entrepreneurs face. Her own biggest challenge? “Access to capital. Being taken seriously. Not being looked at as a trend or a flash in the pan.”

Access to capital is a hurdle for most female business owners. According to VISA Canada’s president Stacey Madge, “73% of women have to self-fund their own business in Canada. Only about 14% actually get a business loan to support their business.”

We sat down with Minkoff to chat about the importance of global, female-focused networks like the Female Founder Collective, the things she’s learned in her own journey, and her advice for female businesses owners.

When you were starting your label was there any advice that you received, from either women in business or women in fashion, that you found really valuable?

I think the idea of persisting, of having staying power, has been always a North Star for me. On the days when you feel like you just want to throw in the towel, to think ‘okay, I can keep going, I can keep doing this.’

As a female entrepreneur, what do you think the difference is in terms of the advice or the guidance you get from other women in business as opposed to men?
I notice that a lot of the men that are around giving advice, at least to me, are very cutthroat, take-no-prisoners, by-the-numbers. They don’t care about the consequences, [it’s about] what benefits me? And I notice that a lot of the women that I get advice from or do business with are like ‘how does everyone win?’ And it’s a very consistent thread.

Join us for our first-ever live @RMsuperwomen Podcast with founder and CEO of Farmgirl Flowers, Christina Stembel. Growing up in a small farm town in northern Indiana, Christina was expected to get married and have babies right after graduating high school. But, Christina had plans of her own, so two weeks after she graduated from high school, she set out for NYC in hopes to start her own business. Today, Stembel is the CEO & Founder of the highly successful flower delivery service, that ships across the entire U.S. Tune into this episode in partnership with @capitalone, as @farmgirlflowers sits down with Rebecca to talk about how she started her business, obstacles she’s faced along the way, and why she feels that success is the best revenge. Link in bio.

What are some of the ways the FFC has helped female entrepreneurs since it was founded? [Canadian members include Smythe, Mejuri and Knix.]

We’ve now done four events with Visa and She’s Next. And FFC has done two. So we’ve reached thousands of women who’ve been able to get tangible takeaways. Panels are great but here today you have all these vendors that can actually help you with the next steps. I gave an example when I spoke earlier — when I had my first return of 200 bags, I didn’t think we were going to survive that. I was in the back of a cab and saw an Authorize.net commercial for credit card machines. This was before Square. And I was like ‘oh I can have a sample sale and I’ll use that machine.’ That transformed our business model, the idea that we could have sample sales twice a year. So when FFC has events, the goal is for women to come away with true learnings. It’s not women talking about how they’re amazing, it’s hour-and-a-half workshops about how to manage cash flow or how to read a P&L.

NEW on the @RMsuperwomen Podcast: Rebecca sits down with Ericka Perry, CEO & Founder of @thestorkbag Pregnancy can be overwhelming enough as it is, especially for first-time mothers. Our guest, Ericka Perry tries to make that experience a little easier with her specially curated care packages which are cleverly named, The Stork Bag. In partnership with @capitalonespark Tune in for a wide-ranging conversation on entrepreneurship, motherhood & much more! ? — link in bio.

What do you think are some of the challenges that are unique to women in business?

Less access to all forms of capital, whether it be VC [venture capital], banks, credit facilities. And I think when you are pitching to some of these well-funded venture capital firms, a lot of the people you’re pitching to are men and they might not understand the market or have the user experience that we know is powerful.

What is the most common question that women reach out to you with?
Money. All money. How to get funding, how to scale. There’s talk about crowdfunding. There’s a great platform called I Fund Women, it’s the largest crowdfunding platform for women-owned companies. They also do coaching so they’ll help you craft your pitch. They’re not just saying ‘crowdfund on here’ but make it better, make your pitch better, make your value proposition better.

NEW on the @RMsuperwomen Podcast: @deepoku’s career journey has taken her from working in fashion, to the film industry, to completely shifting gears and becoming an entrepreneur. Today, Dee is the founder of Women Inspiration & Enterprise @wienetwork, an influential women’s leading network that provides professional women with the motivation and learning to succeed in their careers. Listen as she sits down with Rebecca to talk about the biggest lessons she’s learned in her career and the importance of having allies around you + how important it is to be that to other people too. In partnership with @sapsuccessfactors—Link in bio. ?

Is there any meaningful way to compare what female entrepreneurs in Canada are going through versus in America?
I don’t know because I don’t live the life here but I do know that the numbers are slightly worse here for female entrepreneurs in terms of women in positions of CEO leadership. You are making more cents on the dollar than we are so that’s good — by five cents — but I think there need to be more women in C-suite positions and there just needs to be more access to capital for female-founded companies.

What is one thing you wish you knew when you were just starting out almost 15 years ago?
I think that I would’ve leaned in… Yes we were digital first, we were social first but it was always met with this doubt from the old world and I just wish I wouldn’t have had that fear. We did it anyways but it would’ve been nice not to lose sleep over it.