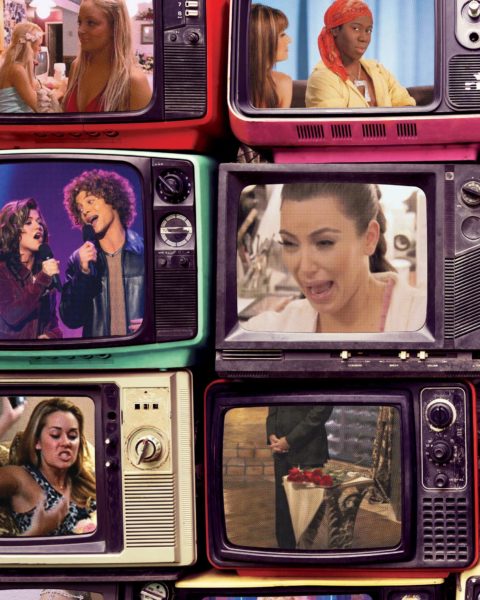 Photography of Kelly Clarkson and Justin Guarini via SGranitz/Getty
Celebrity

After Introducing the World to Donald Trump, Can Reality TV Save Us?

At this point, nothing seems real. And now, despite all of this, reality TV wants us to believe kindness does exist.

As our first foray into reality TV, Survivor delivered an unconventional approach not just to competition shows but to programming in general. By appealing to our collective practice of voyeurism, the series urged us to pledge allegiances (or the opposite) to contestants like winner Richard Hatch or the polarizing Susan Hawk before abandoning them for a new cast the next season. And that was novel: Game shows acquainted us with “real people” for single episodes, and sitcoms gave us fictional characters, but with reality TV we could finally root for personalities. And where MTV’s The Real World thrived during the 1990s, the new brand of reality TV wasn’t about social discourse—it was cutthroat. Ultimately, Survivor created a type of Fight Club for a PG audience, and we loved every minute of it.

For a few precious years, that’s all we wanted. Survivor gave way to The Bachelor, Top Chef, Big Brother, The Amazing Race, American Idol, The Biggest Loser and America’s Next Top Model and fed off the premise of winning, losing and shaming and championing people we believed we now knew. We aligned ourselves with contestants who reflected our values and goals and condemned anyone who didn’t. Above all, we chose to ignore how real these shows weren’t, playing into the hands of producers who were masters of editing.

Since reality TV was cheap to make, networks soon branched into different genres that strayed from the original competitive landscape.

And masters of programming, too. Since reality TV was cheap to make, networks soon branched into different genres that strayed from the original competitive landscape: We lived vicariously through persons of privilege via The Simple Life, Keeping Up with the Kardashians, The Real Housewives, Laguna Beach and The Hills while we laughed at the lives of the housemates in Jersey Shore, thanks to its abundance of booze, clubs, spray tans and poor decision making. Series like House Hunters and Escape to the Country offered comfy spots from which we could be flies on the wall, while Teen Mom took those same spots and made them less comfortable as we were confronted with a type of reality that many of us choose not to pay attention to.

By the 2010s, reality TV had morphed into its own entity. And despite the contrasts in shows, lineups and premises, it always celebrated one overarching theme: pointing a camera at the sides of humanity we’re not used to seeing. The thing is, the American election made doing that less an extension of entertainment and more of a bona fide horror film.

Despite the contrasts in shows, lineups and premises, it always celebrated one overarching theme: pointing a camera at the sides of humanity we’re not used to seeing.

When The Apprentice premiered in 2004, anyone who believed it would lead to the election of a new president obviously had access to a DeLorean. At the time, Donald Trump had established himself as a larger-than-life businessman and media personality, but his Apprentice catchphrase (“You’re fired”) seemed almost harmless—proof of his ruthlessness but digestible enough that a child viewer could repeat it and earn laughs. Plus, personalities like season one’s Omarosa rose to prominence by their willingness to do anything for the job, which, in turn, served to make Trump seem like a glorified moderator or (gasp) a voice of reason. So as The Apprentice continued, Trump became less like a man and more like a character. And we know what came next.

Trump used sound bites and catchphrases to stoke the fire of an already-polarized political landscape. He stood for everything and for nothing and used his social media platforms as an extension of his “reality” by bullying and condemning his opponents while morphing into what he believed people wanted him to be. By 2016, he was a living, breathing, unedited reality-TV character. And it was our lust for such a faux brand of reality that created the cultural climate he could grow in.

So, in response, reality TV shifted. And while our zest for competitiveness has been ingrained for centuries (spoiler: it isn’t going anywhere), TV began to soften it and introduced series like The Great British Bake Off and RuPaul’s Drag Race where contestants competed but under an umbrella of kindness and empathy—two largely previously unexplored themes.

Where older competition ones often thrived on meanness, current reality TV dismisses it almost entirely by offering a gateway into worlds where competitors not only like one another but have one another’s backs.

These series also began to offer an escape. Where older competition ones often thrived on meanness, current reality TV dismisses it almost entirely by offering a gateway into worlds where competitors not only like one another but have one another’s backs. On Bake Off, contestants rush to save another’s creation before worrying about their own, while Drag Race sees competitors open up about their traumas and difficulties, usually with the support of everyone they’re talking to. Terrace House, another comfort-watch, offers nothing but a home of peaceful cohabiters. Its premise is built entirely on watching several humans merely peacefully exist.

The thing is, reality TV has always aspired to show us a side of the world we don’t get to see outright. In the 2000s, it was brazenly showing off our tendencies toward Ayn Rand-like selfishness and competitive natures. In 2018, it is televised proof that people, despite how it is starting to feel, can be kind, good and decent.

Which is a tall order considering that reality TV, while still beloved, is hardly the novelty it was less than a decade ago. Arguably, social media has replaced certain aspects of it. Instead of watching the way a person is edited onscreen, we get to see who they really are via the art of 280 characters (and by their own hand). Our ideas about what “reality” even means are now skewed, especially since the former reality-TV star president has parlayed stories he doesn’t like about himself into the concept of “fake news.” So, at this point, nothing seems real. And now, despite all of this, reality TV wants us to believe kindness does exist.

So, at this point, nothing seems real. And now, despite all of this, reality TV wants us to believe kindness does exist.

And that’s an ironic gesture that’s also come way too late. As the 2000s ushered in an era built on competition—not making friends—it also began making the worst parts of humanity not just acceptable but entertaining. After all, it’s not the names of “nice” or “kind” competitors that we remember but, rather, the names of those we’ve been set up to hate. The Simple Life, iconic in its early popularity, invited viewers to laugh equally at stars Paris Hilton and Nicole Richie (and at their collective ignorance and privilege) and the farming family they were stuck staying with. Teen Mom, while a sometimes-interesting take on socio-economic and familial difficulties that can come with a young, unplanned pregnancy, is often framed as mere entertainment whose stars end up on the covers of weekly tabloids or in porn. Survivor continues with bigger challenges, higher stakes and more room for the contestants to rally against one another. And even the positive steps that reality TV is making aren’t big enough: The Bachelorette only cast its first black woman lead last year, after more than a decade of setting a precedent with blond and brunette white stars, and in the wake of the latest season of The Great British Bake Off, rumours of tension between judge Paul Hollywood and new host Noel Fielding eclipsed the work of the bakers.

Reality TV may want to save us—but only as long as the ratings keep coming in.

Which we should expect. The reason series like Bake Off, Terrace House and Drag Race feel so precious is because they are. They are bankable proof that even at our most competitive, not everyone is willing to kick someone when they’re down or to cheer for themselves over the well-being of their fellow contestants. But these TV shows are also novel. As popular as they are, they’re still not the status quo. They are just enough proof that not everybody is garbage and not every reality-TV host will be a dark mark upon our history. They are the bone we’ve needed pop culture to throw us so we can still have a fraction of hope. They are what we cling to when our own reality feels like too much. They are another extreme.

They are the bone we’ve needed pop culture to throw us so we can still have a fraction of hope. They are what we cling to when our own reality feels like too much. They are another extreme.

Reality TV has never been an accurate reflection of the state of our world. Its legacy has been to exacerbate the worst and best parts of us while teaching us new ways to use and consume social media, celebrities and political figures. It has always urged us to be the worst versions of ourselves, because that is what is “real,” what is “normal.” And while flaws and complications and complexities and bad decisions and being The Worst are a huge part of being a person, reality TV tends to forget that those traits can be balanced with the good stuff, too. It doesn’t have to be either-or. Most people can just be.

And most people are. The people we see on reality TV are highly edited and reduced to sound bites. They are characters. And that’s because our day-to-day reality isn’t watchable. It’s mundane, it’s tedious, it’s beautiful, it’s any collection of words. So, while reality TV may now be serving us Drag Race and Bake Off as a way to counter the damage it has caused, it’s also on us to recognize our own complicity in the reality-TV boom of 2000 and beyond. Because without our viewership, our own realities wouldn’t have begun to shift in the wake of reality TV’s influence. Which means that the harshest realization of all is that no matter what reality TV aspires to do, the only way we can be saved is by acknowledging what’s actually real—and then saving ourselves from it.