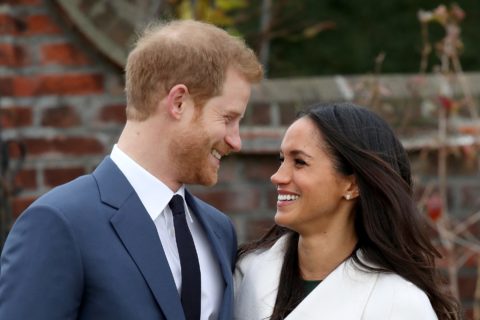 Everything We Know About Prince Harry and Meghan Markle’s Engagement

The Prince of Wales announced the engagement earlier today in an official announcement from Kensington Palace.

The Prince of Wales is delighted to announce the engagement of Prince Harry to Ms. Meghan Markle. pic.twitter.com/zdaHR4mcY6

The two got engaged earlier this month. The Prince reportedly introduced Markle to the Queen in October and also asked Markle’s family for their blessing. Markle’s parents, Thomas Markle and Doria Radlan have wished the couple ‘a lifetime of happiness.’

The two appeared very briefly for a photocall at Kensington Gardens at 9 a.m. EST. The Prince wore a dark blue suit while Meghan looked radiant in a white overcoat by LINE the Label, black top and gold tone strappy heels. When asked by reporters if the engagement was romantic, Prince Harry shouted, “Of course it was.”

The engagement ring is set in yellow gold with three stones, apparently one stone is from Botswana, and another two stones are said to be from his mother, the late Prince Diana’s, jewellery collection.

On Tuesday, the palace announced that Prince Harry and Meghan Markle’s wedding will be in May at St. George’s Chapel at Windsor Castle, the palace announced on Tuesday. It sounds like spring is set to be an exciting time for the royal family: Prince William and Kate Middleton are expecting their third child in April.

This royal wedding will be a little different from Will and Kate’s 2011 televised affair, with St. George’s Chapel being a low-key, intimate alternative to the grandeur of Westminster Abbey. “Windsor is a very special place for Prince Harry, and he and Ms. Markle have regularly spent time there during the last year,” the couple’s Kensington Palace spokesman said during the briefing. “They are delighted that the beautiful grounds of Windsor Castle will be where they begin their lives as a married couple.” Harry reportedly didn’t want a big, fancy wedding, and it sounds like the Prince is getting his way.

In the couple’s first joint interview, which aired last night on BBC, Harry and Markle spilled all kinds of English tea. They revealed how Prince Harry proposed, how they met, and how they fell in love. “We were trying to roast a chicken,” Markle says, “and it just, just an amazing surprise, it was so sweet and natural and very romantic. He got on one knee.” Watch the full interview below.