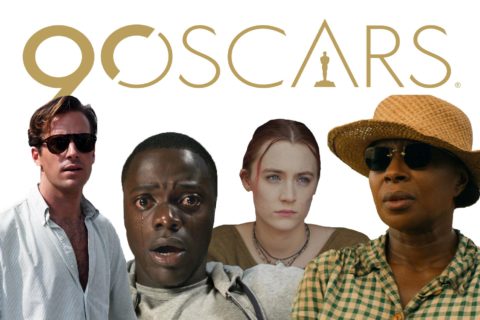 FASHION Editors Weigh In On the 2018 Oscars Nominations

The Oscar Nominations are in. That means publicists are angling for air time, actors are practicing their Didn’t Win but I’m Still Super Happy face, and writers are putting their takes on the fire so they can have hot ones ready for the next month or so. And in that spirit, we offer our first impressions of the nominations–they aren’t as All White and All Male as they’ve been in the past, but there’s still room to be offended, don’t worry. It’ll be a politically charged night, to be sure, but until then, here are our thoughts:

I find most Hollywood movies to be spectacularly average and the Oscars are more or less just an excuse to watch rich people in fancy dresses get emotional rather than any sort of serious indication of which movies are worthy of recognition. That said, this year’s top picks for Best Picture are pretty solid. Lady Bird turned Sacramento in 2002 into one of the greatest period pieces ever made, and Phantom Thread was a kinky fashion design freakfest that revels in its own fetishistic treatment of couture gowns. I doubt either will win, but I’m stoked to see them on the list.

I also found it fascinating to see The Disaster Artist snubbed in every single category beyond Best Adapted Screenplay, considering A) the book was WAY better than the movie and B) it was such a contender at the Golden Globes. It didn’t seem to me like the accusations against James Franco had done any lasting damage to his career, but based on the severity of the snub, it looks like time might actually be up for James Franco.

I don’t want to say that I win my family’s Oscar pool every year, because that would be demonstrably false, but I do alright. The key to dominating any Oscar pool is to learn key lessons every year until patterns emerge. Then throw all those patterns out and pick the same movies as NPR. Still, here are the lessons one can learn from this year’s crop.

When we live in such a divided time maybe it’s comforting to think back on a time when the divide between good and evil was so clear (unlike today where the US President defends Nazis). Hence Dunkirk and Darkest Hour. But probably, we’re just trained to see anything mid-century as prestige.

Typically, this category can go both ways. It can foreshadow a Best Picture win, or it can be the night’s best consolation prize (oh, and also a way of discovering new-ish talent. See Dustin Lance Black and Matt Damon/Ben Affleck, among others). This year is no different: Real life couple Emily V. Gordon and Kumail Nanjiani are nominated for their delightful rom-com The Big Sick and Jordan Peele gets a nom for Get Out, which is less surprising given how much love Get Out is getting. Still, it’s an exciting, diverse, category.

Get Out was the biggest curveball for me — Best Picture, Director, Actor AND Original Screenplay noms?! Was not expecting any Academy recognition for this one (unconventional doesn’t usually float their boat, plus it was nominated in the Best Comedy or Musical category at the Globes which just goes to show that nobody knows what the hell to do with it) but this was one of the most intense, intelligent and zeitgeist-y movies of the year so I’m so glad to see it getting some love.

Also gotta shout out the Greta Gerwig nom. Clearly the Academy didn’t want a repeat of the Natalie Portman dig heard around the world.

But, for every one thing the Academy does right, they—surprise—gotta go do something whack, like shut out Armie Hammer from the Best Supporting Actor category. He’s exquisite in Call Me By Your Name, charming and cheeky on the surface but wrestling so many emotions underneath. (Plus, his voice alone is worthy of pretty much any award out there.)

For someone who is super obsessed with the Oscars—I insist on watching the nominations announced live, I hound everyone in the office to participate in my Oscar pool, and the night of the awards is an Event at my home—I regret to say I haven’t seen as many of the films in question as I should have. But I still have thoughts:

What’s my favourite part of this year’s Oscar nomination list? Seeing Mary J. Blige’s name not once but TWICE for her contributions to Mudbound, and making Oscars history as the first person ever to be nominated for an acting performance and an original song in a single year.

At this year’s Toronto International Film Festival, I attended the cast dinner for the Netflix film, and spent the night dancing in close proximity to Mary J. Blige. Are her nominations and our brief dance floor encounter at all connected? Probably not. But the R&B icon is extremely worthy of her Oscars nod, and I will never miss an opportunity to bring up the fact that I DANCED WITH MARY J. BLIGE.

But this year’s nomination list wasn’t all good news. I’m disappointed that Michael Stuhlbarg was snubbed for his supporting role in Call Me By Your Name. His character’s sensitive acceptance of his son’s sexuality is arguably the best (and undeniably the most tear-jerking) monologue audiences saw on the big screen this year. The scene was SO powerful it prompted Frank Ocean to post on Tumblr: “Michael Stuhlbarg is my new dad now and that’s that.” To which everyone collectively responded: “same.”

The Academy should at least give Stulbarg some kind of special MVP award. You probably don’t know his name, but the seasoned actor delivered compelling performances in three of this year’s nine best picture nominees. If Jimmy Kimmel doesn’t shout out this fact in his opening monologue, I will be turning off my TV.

Oh, and nothing for Wonder Woman? Not even a nod in sound mixing or costume design? Boo.