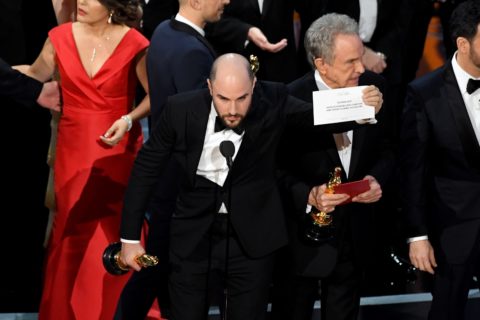 Oscars 2017: Everything You Need to Know

Each year as the Academy Awards approach, it’s a mad dash to catch up on the movie watching we missed over the year. For the months leading up to the big day, the films give us fodder for endless conversations about what types of films we love and which actors charm us to no end. Because the show is long, and it’s a school night, you might not have seen all the good stuff. Here are the top moments, including the good and the bad.

If you’re still cringing from this crazy mistake, we don’t blame you. The announcer, actor Warren Beatty, read that La La Land would take the award for best picture, so the entire cast of the film made their way up to the stage to express their excitement, make their speeches and accept the golden statues. But halfway through the speeches, they discovered that the winner should’ve been Moonlight. Exit La La Land cast and enter Moonlight crew. Every single person on that stage is probably still wondering who the real winner is, and how the wrong card was in the red envelope, but we’ll keep you posted as the details unfold. Consider this a new benchmark for most awkward moment ever.

Everyone following the Kimmel/Damon drama was waiting for the moment when the beef went down. Turns out Kimmel threw his jabs right at the beginning of the show. “When I first met Matt, I was the fat one,” the comedian said, as the camera panned to Damon’s unamused face. The insults don’t stop, from start to finish, so prepare for a slew of hilarious reaction GIFs to come.

An awards show can’t go by without shining a spotlight on 20-time Oscar nominee Meryl Streep. In true Kimmel/Oscars fashion, the host poked fun at the actor’s talent—while also referencing Trump’s post-Golden Globes tweet, which insulted Streep and enraged people everywhere. “We’re also here to honor the actors who seem great but actually really aren’t,” said Kimmel, as the camera focused on Streep, who was visibly embarrassed. “One in particular has stood the test of time for her many uninspiring and overrated performances. From her mediocre work in Out of Africa to her underwhelming performance in Sophie’s Choice, Meryl Streep has phoned it in for her entire lackluster career.” Kimmel asked the bashful Streep to stand, and the audience gave her a deserving standing O. To finish it off, he asked if her dress was Ivanka. #awkward

In one of the sweetest moments, Katherine Johnson, the NASA mathematician on which Hidden Figures was based, was called up onstage by Taraji P. Henson, Octavia Spencer and Janelle Monae. It was an extraordinary moment, and ABOUT DAMN TIME!

While diamonds are generally the buzziest of Oscars accoutrements, the blue ribbon stole the show more than any other sparkler. Stars such as Ruth Negga, Karlie Kloss and Busy Phillips pinned the ribbon on to support the American Civil Liberties Union.

The Iranian Film The Salesman was awarded Best Foreign Language Film at the 2017 Oscars, and its director, Asghar Farhadi, had someone else accept the honour on his behalf. Anousheh Ansari read the director’s speech, which said: “I’m sorry I’m not with you tonight. My absence is out of respect for the people of my country and those from other six nations who have been disrespected by the inhumane law that bans entry of immigrants to the US. Dividing the world into the US and our enemies categories creates fear—a deceitful justification for aggression and war.”

Upon accepting her award for Best Supporting Actress in Fences, Viola Davis gave a powerful speech that brought tears to many eyes. “People ask me all the time, ‘What kind of stories do you want to tell, Viola?’ And I say exhume those bodies, exhume those stories. The stories of the people that dreamed big, and never saw those dreams to fruition,” the actress said, referring to the late-Pulitzer-winning playwright August Wilson, who wrote the original screenplay on which the film was based.

Ms. Stone’s humble nature never ceases to amaze us, and the surprise she exudes when she receives awards—along with the near hyperventilation—is refreshing, especially in Hollywood. After taking home the Golden Globe for Best Actress, you’d think she’d expect the win a little bit more. But given the group of incredibly talented women she was up against—including Meryl Streep, Ruth Negga, Isabelle Huppert and Natalie Portman—we suppose it would be hard to go into it feeling 100 per cent confident. (And now after the Best Picture snafu, she’ll probably be asking for proof in future wins.) We love you, Emma.